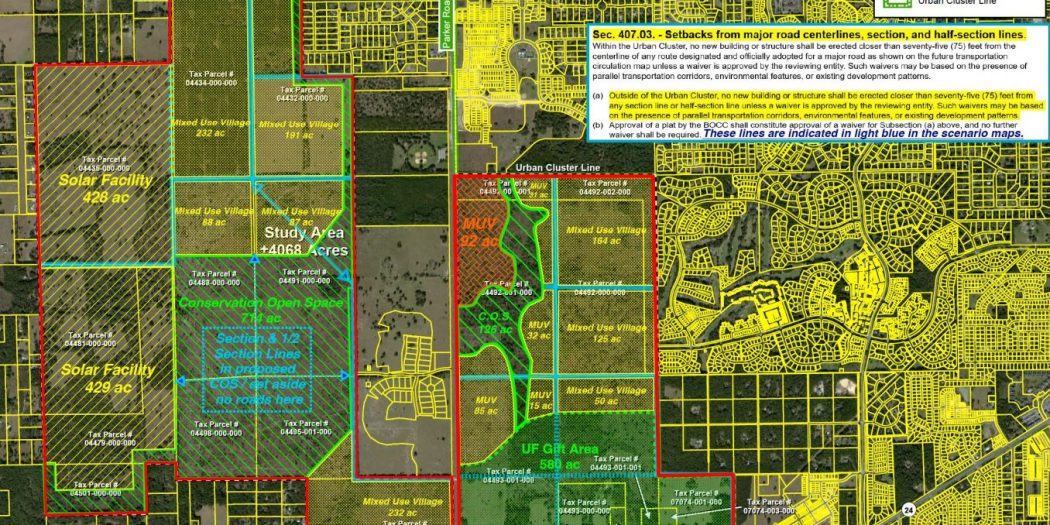 This map shows the “Master Planning” scenario as detailed by the Alachua Board of County Commission staff. (Courtesy of Alachua County)

Over 50 people crowded inside the Alachua County Administration Building Tuesday night to voice their concerns for a proposed development that includes a new University of Florida golf course in southwest Alachua County.

Alachua County recently greenlit a special area study to examine the environmental impacts of developing the over 4,000-acre land along Southwest 122nd Street. The county commission received a staff report with recommendations on how the five elected commissioners should consider the development.

Three recommended scenarios were proposed by the county staff in a presentation from Stephen Hoffstetter, Environmental Protection Department director.

The first, called “No Build,” would retain the entire property in existing condition with active farming. The second, called “By Right,” will develop the property for rural residential use, with a minimum 50% of property set aside as open space.

The third and most opposed scenario is called “Master Planning,” and involves urban density development, solar facilities to the west and a gift area for UF that will be developed into a golf course.

This scenario also recommends the preservation of parts of the Hickory Sink strategic ecosystem, so development would not have as drastic an impact on the environment.

A presentation from Scott Angle, senior vice president for agriculture and natural resources at UF/IFAS, UF’s Chief Operating Officer Charlie Lane took place to talk through the proposed UF golf course. The current course, he said, is about a century old and no longer matches up to other top-tier collegiate programs against which the Gators compete.

Lane assured the public that the golf course would be a part of a sustainable ecosystem and include a variety of plants and wildlife.

Lane also described actions that UF would take to manage the water at the golf course. They would capture and retain rain and stormwater and monitor all sprinklers 24 hours a day.

He also introduced the “First Tee” program to introduce golf to students in Alachua County. He cited the program’s inclusivity, in which 52% of participants were non-Caucasian.

During public comment, many individuals who spoke represented environmental organizations, while others were simply concerned citizens. The overall sentiment was strongly against the “Master Planning” scenario due to environmental concerns.

Bruce Morgan, a resident of Alachua County, spoke in opposition.

Kayla Ehrlich, a UF environmental science junior and representative for the National Audubon Society read out a letter to the county commission. The letter entailed environmental concerns such as loss of habitat for endangered species, loss of aquifer water quality and extinction of endangered wildlife in the area.

Sarah Younger, a representative from the Suwannee St. Johns Sierra Club, spoke out about how development could affect the gopher tortoise, a keystone species. Many tortoises would ultimately have to be relocated or would lose their habitat, Younger said.

“The special area study provides little information about how this golf course would be managed,” Younger said. “It’s not reassuring to think that you’re embarking on this proposal by entrusting them with more oversight over such sensitive lands.”

Armando Grundy-Gomes, an east Gainesville resident, also spoke out against the building of the golf course over potential arsenic that could contaminate the land. He expressed his disdain for the little Tee golf program proposed by UF.

“You’re going to those East Gainesville schools and Hawthorne to teach those little children how to play golf? We know that’s not going to happen,” Grundy-Gomes said. “That is what we call performative equity. Performative diversity.”

The county commission asked questions on Tuesday without indicating which direction it would go in approving, modifying or rejecting the proposal. Commissioners will begin deciding how to proceed with the Lee family property at a board meeting on Oct. 11 at 5 p.m.

Erina is a reporter for WUFT News who can be reached by calling 352-392-6397 or emailing news@wuft.org.
Previous Audio postcard: What some UF students think of the debt relief plan
Next Beloved theater in High Springs faces imminent demolition