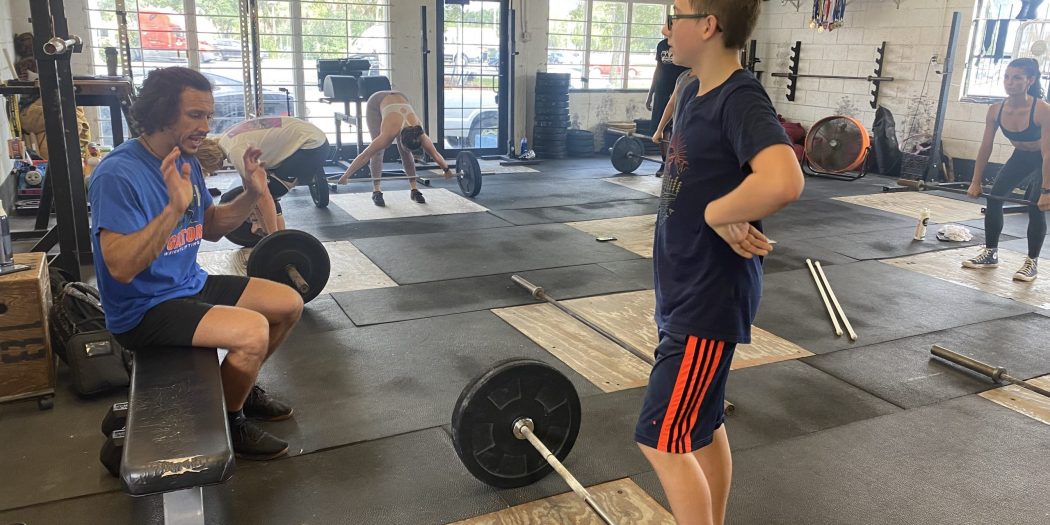 Lucas Burger, 13, prepares to work on his back squat while head coach Michael Espinosa shows him the correct technique. (Jasper Wittig/WUFT News)

Instead of going home when the dismissal bells rang at Lincoln Middle School Wednesday, Lucas Burger, 13, walked a mile to The Ark School of Fitness for his weightlifting training.

Burger started attending classes at the Ark about six months ago and can now lift 100 pounds more than when he started. He comes for an hour at a time three days a week as part of head coach Michael Espinosa’s youth weightlifting class.

In a landscape populated by corporate names like Planet Fitness, Gold’s Gym and Orange Theory,  the Ark stands out as Gainesville’s only not-for-profit gym. Founded in 2012, the Ark’s goal is to create accessible fitness and wellness programs for people of all ages, skill levels and incomes.

The small, triangle-roofed building with blue trim, large windows and a wooden side door is located on the corner of Northeast 11th Street and East University Avenue. When athletes step inside, the loud music and smell of chalk and sweat remind them why they are there. The weightlifting students are scattered about the gym, working out individually or in groups. They often cheer each other on during hard workouts.

Sawyer Cohen, an 18-year-old Florida State University freshman and former youth weightlifter at the Ark, has been coached by Espinosa since he was 12. He said he has not been able to find a gym with the same community assets after moving out of Gainesville.

“It’s an environment in which you feel like you’re a lot closer to the people around you rather than you’re just going there for the gym,” Cohen said. “Michael’s really, really good at developing a sense of community between all the people there. And the size of the gym and the setup of the classes make it really easy for that to become a thing.”

The first three months of youth and college weightlifting training costs $50 per month. After that, youth classes and club coaching are free with 24/7 access to the gym. Espinosa also offers scholarships to waive the cost of the initial three months for those with financial hardships. Rates for Strength Class and Open Gym Membership range from $75 to $144 a month.

Espinosa explained that a lot of other gyms that offer weightlifting and CrossFit are very expensive. “It’s not accessible to most folks because of the cost. I wanted to create a low-cost option and work with kids and continue teaching and create my own institution,” he said.

Espinosa, 27, started his career as a teacher at Lincoln Middle School after graduating from the University of Florida with a Bachelor of Arts degree  in English.

“I got disillusioned with that,” he said. “I was really young, and it was high pressure.”

After leaving his teaching job, Espinosa worked with his wife to manage Rosie’s Organic Farm for four years. He built a home gym at the farm to start doing CrossFit, and he eventually opened it as a space to train others.

When he and his wife decided to leave the farm, he took his passion to greater heights.

“I took all the money I saved selling vegetables at the farmers markets and bought equipment, found a place first, that building we’re in now, and decided to start the Ark,” he said.

At first, Espinosa shared the building with a fencing club, and his gym was contained in the smaller back room of the two-room building. After a year, the fencing club left, and he was able to expand into the second room and outside, where he built an outdoor gym he calls “The Park at the Ark.” Today, the gym has about 120 members.

During the first few weeks of the pandemic, the Ark had to temporarily close. But an outside space allowed people living nearby to continue using its amenities for free.

In June 2021, after the Ark reopened, Troy Guin, 16, joined Espinosa’s youth weightlifting classes. He had been coached on powerlifting previously, and his former coach inspired him to pursue weightlifting.

“I like it more than powerlifting because they’re really complex movements, and it’s really fun to go through the process of learning it,” Guin said. “It’s the closest real life has to a video game in my mind, where you go through all these levels, and you’re always trying to improve yourself.”

Guin said he hopes to compete professionally and eventually become a trainer for youth and college athletes.

“It’s always good to have a trainer, especially in the beginning couple of years to really make sure you’re not going to mess up anything,” he said. “So having a coach around me all the time is really beneficial.”

Coby Rhodes, a 19-year-old University of Florida sophomore, has been practicing Olympic weightlifting for eight years. When he started school in Gainesville, he joined the Gator Weightlifting Club and was introduced to the Ark. Now, he works alongside Espinosa as an assistant coach.

The Ark provides an environment of unconditional acceptance and support for all athletes regardless of age, experience or status, said Espinosa.

“I think we’re all in the gym to mask our insecurities,” Espinosa said. “A big part of why people come into the gym is to have more confidence in themselves. The gym is a microcosm for the larger world. When people come into the gym, they’re doing something that’s really hard, and they’re doing it every single day, and they’re failing. But they’re coming back the next day, and that’s just the way life is.”

Jasper is a reporter for WUFT News who can be reached by calling 352-392-6397 or emailing news@wuft.org.
Previous The Point, Sept. 20, 2022: Two Gainesville-area proposed developments, totaling 6,000 acres, are up for discussion this week
Next Police: Car on fire, with only 3 tires driving through darkness near UF campus