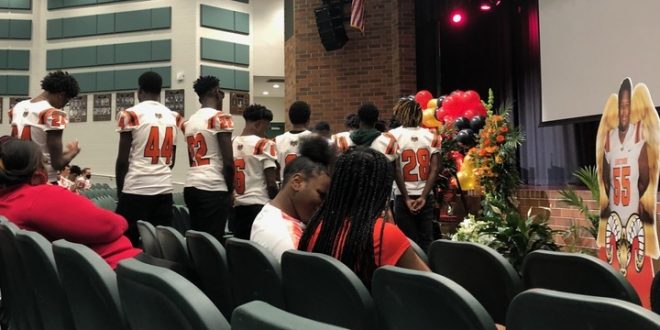 The Eastside Rams varsity football team files into the school auditorium to pay their respects to teammate Dabien White before his funeral service Saturday. “Every day, every play, we’re gonna dedicate the rest of the season to Dae Dae,” Head Coach Harold “Gator” Hoskins said during the service. (Joanna Keen/WUFT News)

WUFT · A funeral at Eastside High

The head coach and two players rose from their seats and walked to the front of the Eastside High School auditorium in Gainesville. The audience, having sung, cried, clapped and cheered during the funeral service, listened as Coach Harold “Gator” Hoskins offered words of comfort.

Speaking in front of 450 mourners Saturday, including the nearly 50 members of the Eastside Rams football team, all dressed in their jerseys, Hoskins pointed to the large frame on an easel between the casket with Dabien White’s body and an array of flower arrangements and balloons.

In the frame was a white and orange Rams jersey with a dark green “55” on the back.

Dabien, a senior offensive lineman better known by his nickname, “Dae Dae,” died Sept. 4 of undisclosed causes at age 17. He was 6-foot-three-inches tall and weighed 330 pounds, but also known by those who loved him as a “gentle giant.”

The Rams lost their game against the Bradford Tornadoes on Friday, their first since Dabien’s death. He was in his third season playing guard and tackle, and during the coach’s funeral tribute, Hoskins called him “irreplaceable.”

“Every day, every play, we’re going to dedicate the rest of the season to Dae Dae,” he said.

Considered a homegoing service more so than a funeral by everyone present, it was emotional nonetheless from start to finish. An awed hush consumed the room – broken only by an occasional “Oh, wow!” – as the football team filed into their seats.

The family procession into the ceremony was ringing with both songs and cries. As they took their seats in the center of the auditorium, many were shaken. One young man passed out and had to be carried out of the room on the shoulder of a relative.

A minister paused her words when a slideshow featuring pictures of Dabien with friends and loved ones appeared on a projector screen. The tears began to flow immediately, but the sounds of mourning were interrupted by one little girl’s excited cry of “Dae Dae!” upon seeing his face.

Rev. Edward Starling, pastor of Third Bethel Baptist Church in Gainesville, expressed thanks during a prayer for Dabien’s life.

“We thank you, Oh God, for giving us a chance to come and stand with this family and say ‘goodbye’ to a friend, a giant that stayed here 17 years, and done the work (as) if he had been here 50 years,” Starling said.

Saying they had lost a loved one at a young age 22 years ago, Robert Scott said to Dabien’s mother and father, Gabriel Pressley and Victor White Jr., about the pain they must be feeling, “It ain’t gonna ever go away, but you will get stronger day by day.”

Rutha Scott asking the football team to stand and then thanked them for being there.

“Praise God (Dabien) was a part of this team,” she said.

Everyone else in the auditorium applauded loudly.

In his eulogy, Bishop Chris Stokes also honored the team, calling each member to rise from their seats and stand together in front of the stage, as he left the podium to get closer to them.

After the funeral, many who attended remembered Dabien fondly.

“He was always very persistent at his craft, at what he wanted to do,” Assistant Coach Rod Johnson said. “This summer we had some rough times as far as conditioning … but Dabien showed up every day, no matter how hard the workout was.”

Joanna is a reporter for WUFT News who can be reached by calling 352-392-6397 or emailing news@wuft.org.
Previous Trial scheduled Monday for Gainesville men accused of using Snapchat to sell drugs
Next Watch live: Queen Elizabeth’s funeral service