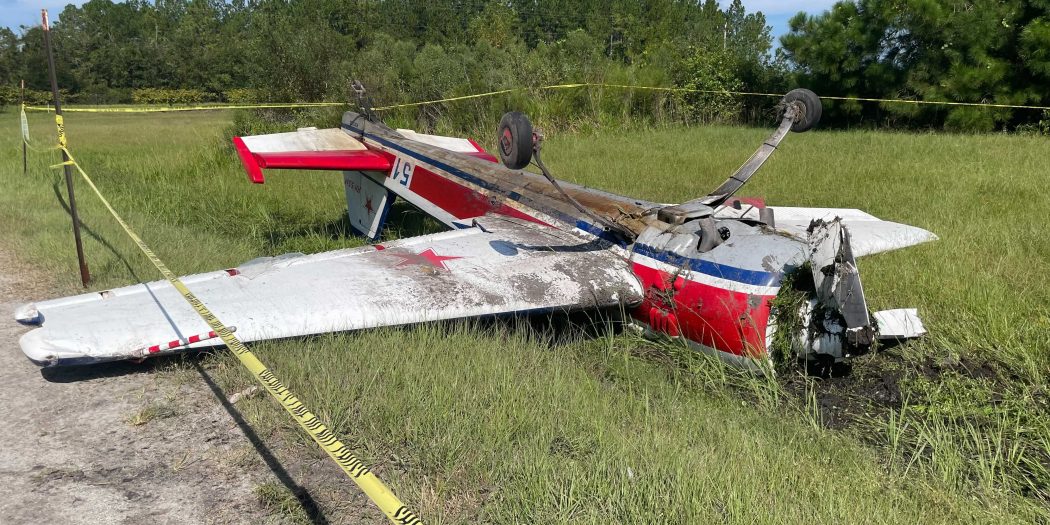 Authorities in Alachua County were on the scene of a small plane crash Thursday morning. Witnesses and authorities said the small, single-engine plane with only the pilot aboard crashed and flipped in a flooded ditch of a farm northeast of Gainesville Regional Airport. (Troy Myers/WUFT News)

By Troy Myers and Julia Coin

WALDO, Fla. – A small aerobatic plane with only the pilot aboard crashed in a flooded ditch northeast of Gainesville Regional Airport early Thursday and flipped, authorities and witnesses said. The pilot survived and was being checked at a nearby hospital.

The 53-year-old pilot, who was not initially identified, was pulled from the wreckage by a farm worker about 8 a.m. Thursday, said Debra Yarborough, the office manager for Straughn Farms.

The damaged plane, a Yakovlev Yak 55-M built in 1992, was upside down in a farm field next to a tractor as fire trucks, sheriff’s cruisers and a helicopter from Alachua County responded to the scene. The planes are well known for aerobatics and are generally considered reliable.

“He’s lucky he went down in water,” Yarborough said, “because if he hadn’t it probably would have killed him.”

Authorities took the pilot to UF Health Shands Hospital to be checked for injuries, said Becky Butscher, a spokeswoman for the Alachua County Sheriff’s Office.

It was not immediately clear where the plane took off or was headed, Butscher said.

Editor’s note: A previous version of this story contained the incorrect age of the pilot.

Troy is a reporter for WUFT News who can be reached by calling 352-392-6397 or emailing news@wuft.org.
Previous The Point, Sept. 15, 2022: In a surprise move, defense attorneys for confessed Parkland school shooter rest their case
Next Volunteers wanted for Cedar Key’s 16th annual coastal cleanup