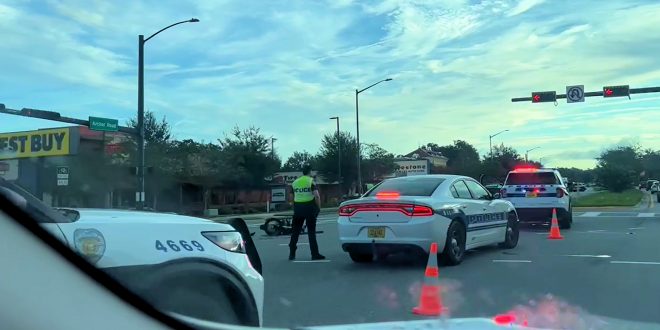 Reggie L. Lovett Jr., 23, of Gainesville was riding a black Suzuki west on Southwest Archer Road when he ran a red light at Clark Butler Boulevard striking an SUV, according to a crash report. (Denise Vickers/WUFT News)

This story has been updated to include comment from the owner of the motorcycle, update the headline, add Lovett family comments and to replace the photo of Lovett with one from his family.

READ: Open Letter to the Community about our Coverage

Why we reported this story this way

This news article focuses on how the victim of this week’s fatal motorcycle crash at one of the city’s busiest intersections was known in our community: He was already a public figure by virtue of having been convicted and imprisoned in connection with a drive-by shooting of four teens after a high school football game between two of the city’s most prominent schools five years ago. News organizations are obligated to seek truth and report consequential events for our community, revealing relevant and contextual background details about the subjects of our reporting. We recognize that none of us is necessarily the sum of our worst moments, and we generally will not include in our news coverage information about a person’s background we do not believe are important for readers to know. Mr. Lovett’s public identity at age 23 was partially defined by his role in a publicized case of violence near Citizens Field in Gainesville. We always want to tell the most complete stories we possibly can. That is why we also reached out to Mr. Lovett’s family members so that they could shed light on his life more recently. We have updated our story to reflect that. We take seriously our responsibility as a news organization and will seek to continue to cover our community fairly, accurately and with compassion.

The sister of a motorcyclist who died in a traffic crash Tuesday morning near Butler Plaza says her brother was turning his life around.

On Tuesday morning, Reggie L. Lovett Jr., 23, of Gainesville was riding a black Suzuki westbound on Southwest Archer Road when he ran a red light at Clark Butler Boulevard striking an SUV, according to a crash report. The motorcycle struck the driver’s side door of the SUV, and Lovett flew off the motorcycle. Lovett, who was not wearing a helmet, died at the scene, police said.

Reached by phone Wednesday, the owner of the motorcycle, a former UF student, said his bike was stolen.

Tuesday’s accident was not the first time Reggie Lovett’s name has been in the news. He made headlines in 2018 after he was identified as the assailant in the August 2017 drive-by shooting that left four teens wounded following a high school football rivalry game between Eastside and Buchholz at Citizens Field.  He served time in prison for his role in the shooting.

Lovett was initially charged with four counts of attempted first-degree murder, but he ultimately pleaded guilty to discharging a firearm from a vehicle and aggravated assault with a deadly weapon and was sentenced to 30 months in prison, according to court records.

Lovett’s sister, T’Yanna Robinson, said she witnessed a change in her brother more recently. “He wasn’t even hanging around the same people anymore. He wasn’t like in the streets anymore. He wasn’t trying to hang out. He didn’t even go to clubs.”

According to Robinson, Lovett was on his way to work at the time of the accident. She said he was employed by a local company doing a variety of tasks ranging from lawn maintenance, to painting and pressure washing.

They had spoken on the phone just the day before his death.  He told her about a baby turtle he found in his yard that he nicknamed “Uncle Pee Wee.”

She said he enjoyed spending time on weekends with his four young children – two boys and two girls who range in age from 2 to 4. Robinson said he had gotten focused and into a routine – go to work, be around his family and eat.

“His favorite meal was chicken, creamed corn and mashed potatoes,” Robinson said. “That’s all he wanted to eat. He would eat that every night.”

Five days before his death, Lovett was issued a summons for violating probation in a 2021 case in which he pleaded guilty to domestic battery after assaulting and threatening to shoot the mother of his child. In addition to 12 months probation, Lovett was sentenced to 60 days in jail.

Robinson said Lovett got engaged within the last year. She believes the combination of his kids, his fiancée and his family were helping him change.

“I really believe he just wanted his freedom,” she said. “He was tired of going through that. He was tired of just putting himself in a box and just being looked at as a stereotype.”

Instead of his past, Lovett’s sister clings to the memory of the man she knew: “I would like him to be remembered as very loyal, very sweet and humble.”

Lovett’s funeral will be Saturday, September 24, at 1p.m. at Faith Missionary Baptist Church.

Camila is a reporter for WUFT News who can be reached by calling 352-392-6397 or emailing news@wuft.org.
Previous Defense suddenly rests case in Florida school shooter trial
Next To become a welcoming city to immigrants, Gainesville agencies hire for new positions, pilot language access line