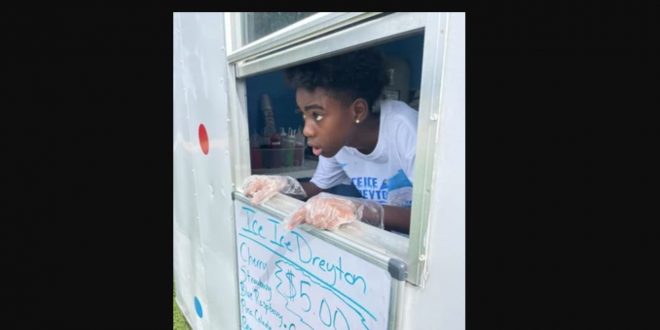 Dreyton McDonald knows he’s not a regular kid and he likes it that way.

And he has been for several years now.

At age 9, he said his father, Dominic McDonald, approached him with a proposition: “My dad told me to choose between selling doughnuts or selling snow cones and I didn’t want to sell doughnuts,” he explained.

With that, the elder McDonald was off to buy his son a 14-by-8-foot trailer that’s been converted into a mobile snow cone shop called Ice Ice Dreyton. On weekends, the trailer is set up at parks and special events across Ocala, Fla., where Dreyton and his dad live.

“I drive and I set up the generator but really, he’s the one calling the shots. He does everything else,” McDonald said.

That means Dreyton is responsible, not just for making the snow cones, but also choosing which flavors to offer — Dreamsicle and cotton candy are his favorites — luring in customers, and handling all of the money.

For his father, who runs a massage therapy business, part of the inspiration for the snow cone shop was to help Dreyton feel connected to Ocala, where he moved after McDonald got full custody of him. But it also came out of need.

“I’m a single dad,” McDonald said. “It’s hard to get by … and I wanted him to learn he also has to contribute.”

It helps that it also keeps his son occupied in a constructive way.

“I wanted something to keep him and his peers out of trouble,” McDonald said. “It’s a way they can make money so they can buy themselves things they need or want, like school clothes or toys or games, shoes, whatever. And, if I can help him and his peers do that, that means I’m helping other families and that’s what I’m about.”

Dreyton said that he likes being in charge and having his friends work alongside him.

“I think I’m a good boss,” he said after some consideration, before adding, “That’s what my friends say.”

He also likes the independence of it all.

“It feels good to know I have my own money and that I can buy things I want but also my dad is saving money for me,” he said, in one of his more talkative moments.

McDonald is storing the lion’s share of the profits for Dreyton’s college tuition or a new business venture he may want to take on in the future. So far, there are a couple thousand dollars in the bank and by the time the now-7th grader graduates from high school, there will be significantly more, he added.

That’s not to say McDonald doesn’t allow his son the occasional indulgence.

Dreyton recently splurged on a new school wardrobe and a coveted pair of Nike Air Jordans.

“They were $150!” Dreyton said gleefully. It’s the most expensive purchase he’s ever made.

Dreyton would work more if he could, he said. But with school work and basketball practice, he’s limited to weekends and the rare school night special event where he gets to sling “snow cones that make people happy.”

He’s definitely caught the entrepreneurial bug from his father, he said. The two now talk about someday opening up a storefront that his dad would run during the day and he would take over at night. And he hopes to someday expand beyond shaved ice.

“I’m taking cooking in school this year so maybe I’ll learn some recipes and I can start selling food, too,” he said.