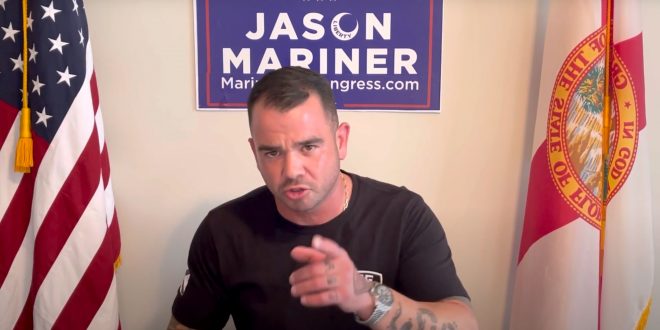 Jason Mariner appears in a campaign video posted on YouTube on August 16, 2021. (Image via screen grab from Mariner For Congress/YouTube)

Jason Mariner and his lawyer did not return phone calls, texts or emails over five days to discuss Charlene Mariner’s claims or the court records. Jason Mariner filed a counterclaim in court, accusing his ex-wife of hiding the couple’s children and failing to abide by a shared custody agreement. Jason Mariner said she still owes him $7,000 from their divorce and she texted him that, as far as she is concerned, “there is no agreement.”

Charlene Mariner said that her ex-husband passed out from drugs or alcohol while exchanging custody of their sons earlier this summer, according to court records. She also said Jason Mariner’s mother and girlfriend both reported to her last month that he was using illegal drugs again and acting irrationally, and the children were not safe.

Jason Mariner was “clearly under the influence of drugs and or controlled substances” on Aug. 10 during a Facetime call with the children, Charlene Mariner said, according to the court records. She described his speech as inaudible and said he was “clearly not sober.”

Charlene Mariner declined in phone interviews to discuss her divorce or her new claims about Jason Mariner.

County Judge Debra Moses Stephens last month denied an emergency motion to turn over custody of the children immediately to Charlene Mariner. The ex-wife separately asked the court to require Jason Mariner be drug tested and allow him only supervised visitation of the boys, not shared custody. That request is pending.

Mariner won the two-person GOP primary last year – six months after his divorce was finalized – with 58 percent of the vote in the heavily Democratic 20th congressional district, which includes parts of Broward and Palm Beach counties. He received close to 11,000 votes, badly losing the special election in January to replace incumbent Rep. Alcee Hastings, D-Fla., who died last year. Rep. Sheila Cherfilus-McCormick won that race with around 45,000 votes, beating Jason Mariner by 59 percentage points, then she won her Democratic primary last month.

Fresh Take Florida, a news service of the University of Florida College of Journalism and Communications, reported last year that Mariner was a felon who did not go through the state’s process to restore his civil rights after his imprisonment. That step is required under Florida law for a candidate to hold political office, although the U.S. Constitution does not bar felons from serving in Congress. No one formally challenged Mariner’s eligibility, so the question remains unresolved by the courts or Florida’s Division of Elections.

Jason Mariner had served roughly two years total in the Palm Beach County Jail between 2007 and 2012 on charges that included felony theft, burglary, cocaine possession, obstruction and violently resisting arrest, records showed. He was open during his campaign about his criminal background, telling voters, “Before running for Congress, I ran from the law.” He also promised he would be tough on crime.

Police in Delray Beach said they watched Jason Mariner buy crack cocaine at a home in April 2012, and tried to swallow it when an officer pulled over his car for speeding moments later, according to court records. He pleaded guilty and was sentenced to 14 months in prison and fined $2,792.

Meanwhile, Jason Mariner’s advertising business, Adskinz LLC, is being sued for $1.65 million by a company, Strategic Marketing LLC, that said it provided sales leads, business advice and support in exchange for a broken promise of 15 percent of Mariner’s company. The case has been scheduled for a jury trial in the spring.

It wasn’t clear how Jason Mariner was financially supporting himself. An affidavit he filed in his divorce case last year said he was earning $700 a month with expenses of about $3,700 each month. His congressional candidate financial disclosure, filed last year in the Capitol, did not identify any sources of earned or unearned income. His congressional campaign paid his advertising company $1,300 last December, a fraction of the $127,000 it spent during the election.

In her new request, Charlene Mariner asked the judge to order her ex-husband to pay more child support and cover her lawyer’s fees. The home where he is living in Loxahatchee was co-purchased by his mother and his girlfriend earlier this year, according to property records, but his girlfriend’s last name was misspelled in the records as Calagno, not Calcagno.

A judge last week threw out a speeding ticket against Jason Mariner after a Palm Beach County sheriff’s deputy did not show up in court. The deputy had clocked him on radar July 11 driving 83 mph in a 45 mph zone in a car owned by his mother, according to the citation. His ex-wife and the deputy said his children, ages 6 and 3, were in the back seat. His youngest son turns 4 this week.

A sheriff’s spokeswoman, Therese Barbera, said the deputy had notified the court in advance that he was unavailable that day.

Days after his speeding citation on July 14, the Florida Highway Patrol said Jason Mariner crashed the same car on Interstate 95 west of Lantana, Florida, causing about $2,600 in property damage. His sons were in the backseat of the car in booster seats, according to the crash report. A trooper cited him with careless driving, and he is expected to appear in circuit court on Sept. 28 in that case.

Charlene Mariner said she previously believed her sons were not in the car during the collision. The Florida Highway Patrol crash report lists both sons as passengers in the back seat.

Charlene Mariner cited the traffic incidents in her court filing and said her ex-husband “placed the minor children in serious danger.”

Troy is a reporter for WUFT News who can be reached by calling 352-392-6397 or emailing news@wuft.org.
Previous The Point, Sept. 13, 2022: Florida’s deaths from COVID-19 have surpassed 80,000
Next How increased demand for Florida housing impacts retirement communities