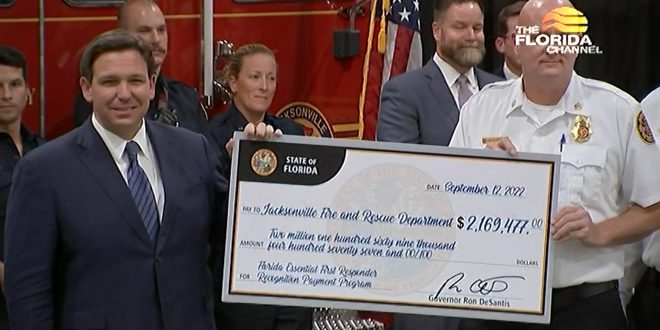 DeSantis cuts another round of checks for Florida’s first responders

Nearly 100,000 first responders in Florida including firefighters, EMTs, paramedics and law enforcement officers at the municipal and county levels will receive a $1,000 bonus this year, Gov. Ron DeSantis said Monday.

The bonus is the second of its kind – the first went out last year as a part of the Florida Department of Economic Opportunity’s “Florida Essential First Responder Recognition Payment Program.”

The money the governor announced Monday was funded by the federal government’s American Rescue Plan, which provides $350 billion to state, local and tribal governments across the U.S. to support the response to and recovery from the pandemic. Florida received $8.8 billion.

Those eligible will receive a check in the mail written for slightly more than $1,000 to make up for funds lost after taxation, DeSantis said.

First responders hired after May 1 are not eligible for the bonus.

DeSantis made the announcement Monday in Jacksonville, Florida, where he handed out the first checks to members of the Jacksonville Fire and Rescue Department. The department received about $2.1 million.

The announcement comes one day after the 21st anniversary of 9/11. DeSantis acknowledged the role first responders played during the attacks citing it as a reason for his appreciation of first responders today.

The bonus is the latest in a slew of financial incentives the state has provided to first responders. DeSantis said in August he supports incentivizing law enforcement officers and other first responders to fill the nearly 9,000 vacant teaching positions in Florida, and has asked for legislation that would provide a $4,000 bonus to those that make the switch. DeSantis also launched the “Florida Hometown Heroes Housing Program,” in May — an effort to assist Floridians in various positions including law enforcement and emergency response in buying homes.

Other incentives include offering $5,000 bonuses for police officers who relocate to Florida and setting aside $15 million to increase the salaries of law enforcement officers in counties the state considers financially constrained, DeSantis said.

“There’s not a lot of states that are doing the outreach we’re doing,” the governor said.

Fire Chief Keith Powers of the Jacksonville Fire and Rescue Department thanked the governor for his support.

Nora is a reporter for WUFT News who can be reached by calling 352-392-6397 or emailing news@wuft.org.
Previous University of Florida is top 5 — again — in U.S. News & World Report rankings
Next Gainesville fugitive spends birthday in jail after high-speed pursuits