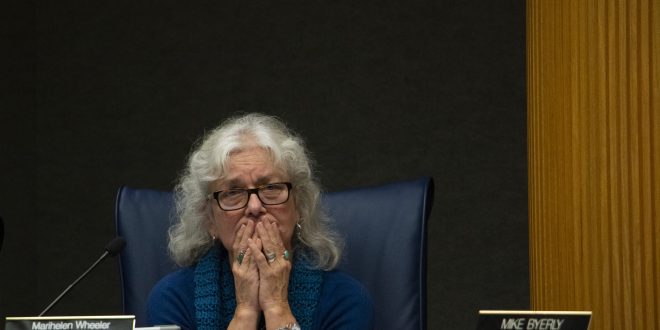 County Commissioner Marihelen Wheeler listens intently to residents commenting on the types of development they would like to see in East Gainesville. Proposed projects included hospitals, parks and athletic fields. (Shelbie Eakins/WUFT News)

Alachua County Commissioner Marihelen Wheeler is being sued in Alachua County Circuit Court over questions about her residency following her Aug. 23 victory in the Democratic primary for the District 2 seat.

Voter records do show Wheeler was registered to vote in district two at the end of July.

However, Garvin claims Wheeler was not a resident of the district when she defeated Charlie Jackson in the Aug. 23 primary. Garvin and Wheeler are both registered Democrats, voter records show.

The Florida Constitution states that candidates must reside in their desired district at the time of the election, but, the wording does not make clear if “election” refers to the primary or general.

Reached by phone Friday afternoon, Wheeler said she was not aware she was facing a lawsuit. She declined to comment further citing her unfamiliarity with the matter.

If the court rules in favor of Garvin, Wheeler could be disqualified from the race.

Wheeler is scheduled to face Republican opponent Ed Braddy in the general election on Nov. 8.

Kendall Brandt is a reporter for WUFT News who can be reached by calling 352-392-6397 or emailing news@wuft.org.
Previous NCAA President Mark Emmert talks college athletics during visit to UF
Next Show Series at Florida Horse Park in Ocala offers variety and family fun