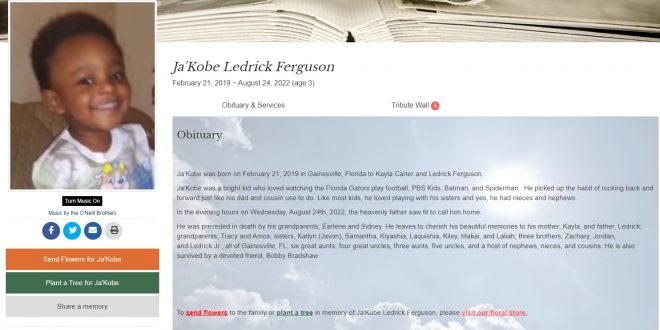 Police have arrested both parents of a 3-year-old boy who was fatally shot weeks ago with a pistol he found in his home in East Gainesville. (Screenshot / PhillipWiley.com)

Police arrest parents of toddler who accidentally shot self

Gainesville police on Thursday said they arrested the parents of a 3-year-old boy shot and killed while he played with a pistol at a home in east Gainesville late last month.

Police identified the parents as Ledrick Lataurus Ferguson, 48, and Kayla Shelynn Carter, 34, both of Gainesville. They were held in jail on felony charges, including manslaughter, unsafe storage of a firearm and three counts of child neglect, court records showed. The neglect charges related to the two young siblings who were home at the time with the gunshot victim, Ja’Kobe Ferguson.

Police said Ferguson stored two pistols inside a console of the family’s couch. The parents were away from home – their children in the care of a family friend who police did not identify but described as “a person not suited for that responsibility” – when Ja’Kobe began to play with the guns when one discharged on Aug. 24, police said.

Police said the other two young children were safe and in the care of relatives. The family had been living in a mobile home park south of Gainesville’s airport.

Ferguson has at least eight felony criminal convictions dating back at least 27 years, including robbery, grand theft auto and burglary, according to court records. Police said he was not allowed to own or possess a gun. He was additionally facing a charge of possession of a weapon by a convicted felon.

Carter told police she was paid to be a healthcare worker for the man who was watching the children the evening of the shooting, and said he sometimes babysat her children. Police concluded the man lacked the physical and mental faculties required to care for the children, and Ferguson later told investigators he agreed the man wasn’t capable.

On his Facebook page, Ferguson posted a photo and note grieving the loss of his son the day after the shooting: “I’m going to miss you, son. This really hurts. I can’t stop crying but I have to be strong for my family. Fly high, son, and know I love you.”

Ferguson and Carter could not be reached to discuss the shooting or the criminal charges they were facing. The sheriff’s office does not permit reporters to interview defendants behind bars without written permission from a defense lawyer, and it was unclear whether they had retained attorneys yet.

Ja’Kobe’s obituary included a photograph of a grinning, toothy toddler and described the boy as an avid fan of Gators football, Batman and Spiderman. It identified 10 brothers and sisters.

The two siblings who were witnesses told investigators that Ferguson regularly kept the guns in the couch’s console or on top of the refrigerator. The mother initially told police she did not know there were guns in the home, but the family friend told police that Ferguson showed him the firearms in front of Carter and Ja’Kobe.

Police said Carter subsequently acknowledged she knew Ferguson had guns in the home.

Bryce is a reporter for WUFT News who can be reached by calling 352-392-6397 or emailing news@wuft.org.
Previous Florida is planning to make naloxone kits available through county health departments
Next The Point, Sept. 8, 2022: Parents of Gainesville child who shot himself face multiple felony charges