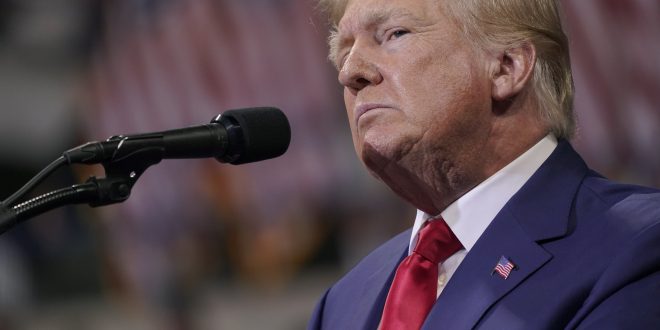 Cannon on Monday authorized an outside legal expert to review the records taken during the Aug. 8 search of Mar-a-Lago as part of a probe into Trump’s inappropriate retention of sensitive material from the White House. The expert would have power to weed out any material that might be protected by claims of attorney-client privilege or executive privilege.

The order came over the strenuous objections of the Justice Department, which said a so-called special master was not necessary in part because officials had already completed their review of potentially privileged documents.

The move was cheered by Trump supporters seeking a check on the government’s probe. But others say Cannon gave undue deference to the former president and unnecessarily put on hold certain investigative work by the Justice Department. They say she has slowed the momentum of the federal investigation into possible Espionage Act violations.

The Justice Department has not indicated whether it will appeal, though there are reasons why it might not be eager to do so, including out of concern that it could delay the investigation further or produce case law that it finds unfavorable for future probes, said Brandon Fox, a Los Angeles defense attorney and former federal prosecutor.

Regardless, he said, Cannon’s opinion creates a perception of “two systems of justice.”

“The criminal justice system is set up to try to make sure that everybody is accountable in the same way for alleged crimes they have committed,” Fox said. “Here, it appears that Mr. Trump is getting special benefit” by virtue of being a former president.

Trump’s former attorney general, William Barr, told Fox News on Tuesday that the opinion was “deeply flawed in a number of ways.”

A little-known federal judge appointed to the bench two years ago by Trump, Cannon delivered easily the most consequential move of her career on Monday. It thrust the Colombian-born former federal prosecutor to the center of a simmering legal debate about the confines of executive privilege and presidential power.

Cannon is the least senior federal judge for the Southern District of Florida, where five of the 16 active judges were appointed by Trump. According to court rules, cases like the special master request are “assigned on a blind rotation basis … to a judge assigned to hear cases in the division to which the case has been assigned.”

During her roughly seven years as an assistant U.S. attorney, Cannon worked mainly out of the U.S. attorney’s office in Fort Pierce, Florida, which is part of the same federal district as Miami but about 130 miles (209 kilometers) to the north. The cases there generally do not get the same kind of attention as those in the more densely populated, media-heavy areas around Miami.

Beginning in 2013, Cannon prosecuted 41 cases as part of the Major Crimes Division, later handling appeals of criminal convictions and sentences.

One of those involved a defendant in a major $800 million Ponzi scheme who unsuccessfully appealed his numerous fraud convictions to the Atlanta-based 11th U.S. Circuit Court of Appeals. Her opposing counsel in that case, longtime Miami defense attorney Richard Klugh, described Cannon as “very bright and talented” and fair to the defense.

“I didn’t see anything I could characterize as anything other than good lawyering, and no political bias whatsoever,” Klugh said, adding that he has worked on cases handled by Cannon as a federal judge although he has not appeared in her courtroom.

“She’s known for affording fair process and hearings. You like somebody who actually hears you out,” he said.

Born in Cali, Colombia, in 1981, as her father worked in advertising throughout South and Latin America, Cannon came to the United States as a child, ultimately graduating from Duke University in 2003.

During her college years, Cannon wrote a series of articles for El Nuevo Herald, a Spanish-language newspaper in southern Florida owned by the Miami Herald. According to a list of articles provided to the Senate Judiciary Committee, Cannon wrote primarily about health- and culture-related topics.

After earning a degree from the University of Michigan in 2007, Cannon clerked for U.S. District Judge Steven M. Colloton on the U.S. Court of Appeals for the 8th Circuit. She next worked in private practice in Washington for three years with prominent international law firm Gibson Dunn & Crutcher.

The question of fealty to Trump surfaced during her 2020 Senate confirmation process, when Democratic Sen. Dianne Feinstein of California asked in written questions if Cannon had had “any discussions with anyone — including, but not limited to, individuals at the White House, at the Justice Department, or any outside groups — about loyalty to President Trump?”

“No,” was Cannon’s simple reply.

Of course, being a Trump-appointed judge in no way assures deciding cases in his favor.

In May, for instance, U.S. District Judge Timothy J. Kelly — nominated by Trump in 2017 — permitted the House panel probing the Jan. 6 Capitol riot to obtain the Republican National Committee’s marketing email data leading up to the violence, turning aside claims that the committee’s practices weren’t appropriate. Other Trump-appointed judges have sided in favor of the panel’s work.

But Cannon’s opinion in this case, and her musings about the possibility of “reputational harm” caused to Trump in the event of an indictment, have focused fresh attention on her judicial background.

Cannon’s initial response to the special master request, in which she asked the Trump team for more clarity about what exactly they wanted her to do and why they thought she might have jurisdiction, suggested some skepticism. But days later, she followed up with a new order in which she said it was her “preliminary intent” to appoint a special master but would give the Justice Department an opportunity first to argue against it.

Since 2005, Cannon has been a member of the Federalist Society, a conservative legal organization that has championed judges appointed by Trump, including Supreme Court Justices Neil Gorsuch, Brett Kavanaugh and Amy Coney Barrett.

During her July 2020 confirmation hearing, the then-prosecutor noted that her mother “had to flee the repressive Castro regime in search of freedom and security,” leaving Cuba at the age of 7.

“Thank you for teaching me about the blessing that is this country and the importance of securing the rule of law for generations to come,” Cannon said, addressing her mother.

The Associated Press is a wire service to which WUFT News subscribes.
Previous The Point, Sept. 7, 2022: Florida leaders want to look at alternative ratings agencies for property insurers
Next A Florida woman touted as a ‘Mother Teresa’ ran a $196 million Ponzi scheme, feds say