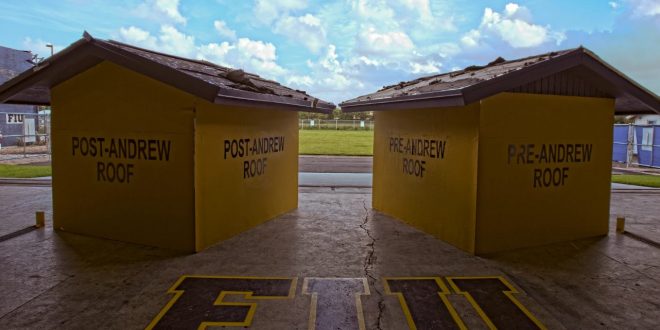 Robert Molleda was one year into his career at the National Weather Service in Miami when Hurricane Andrew hit South Florida. Molleda was young and excited to experience his first hurricane. Miami had not seen a hurricane make landfall since Hurricane Betsy in 1965, 27 years prior. But as the storm rapidly intensified, the excitement dissipated.

It was late on a Saturday when it became clear Andrew was going to hit Miami. On Sunday, Molleda rested, helped his family get set up for the storm, and went to work at the NWS office. Andrew passed through Miami overnight and into the next morning. “We could see the winds picking up, 100, 120, 130… it went up and up and up,” Molleda said. Then, a loud bang. Molleda worried that the roof had caved in. But after a minute, he and the other meteorologists realized the radar monitoring scope had gone black.

“That was it, we lost the radar. That sound we heard was the radar’s dome collapsing and shattering into a million pieces.”

Today, Molleda is still with the National Weather Service in Miami as the Warning Coordination Meteorologist. The storm serves as a reminder, especially to those who lived it, to always be prepared. “The legacy and takeaway from Andrew is that we need to be ready in Florida,” Molleda said.

On Aug. 23, on the anniversary of the storm’s landfall in Florida, Gov. Ron DeSantis and FDEM Director Kevin Guthrie commented on how Florida became a “national leader in emergency management.” But 30 years after Hurricane Andrew made landfall in Miami as a Category 5 storm, there are many lessons learned and lessons we are still learning about these powerful storms and the way their impact.

From the way buildings are constructed with hurricanes in mind, to community organization, to emergency communication, Andrew’s legacy was a widespread change in the way Florida prepares for and responds to hurricanes. With its 157 miles-per-hour plus winds and a 17-foot storm surge, Andrew’s well-documented destruction was nothing short of devastating to Miami-Dade County, especially the southern portion where the storm made landfall.

“We started to hear stories from friends and family in that area, about their homes being really damaged and, in some cases, they lost everything,” he said, “that’s when it started to sink it that things were really bad.” Molleda and colleagues from the NWS drove around to the areas most affected to help clean up. “We were there just to help pick up the pieces,” Molleda said, “furniture lying out in the front yard, gaping holes in the roof of some homes, total destruction in some neighborhoods.”

Miami’s community response after Andrew is something that still makes an impact on those who lived it. “It was the neighborhood that got together” to help each other said Sandra Gonzalez-Levy, remembering the way her neighbors shared food and resources after the storm. She recalls experiencing Andrew with her three children from a walk-in closet, protected under a mattress. “I have never heard such a bad sound,” she said, “it felt like a train was actually passing through our house. We were so afraid.” Her home in Coral Gables was spared from substantial damage, though she lived without electricity for several weeks. According to Molleda “as bad as Andrew was, it would have been much worse if it had hit just a few miles northward in more heavily populated areas.”

The areas that were heavily impacted include Homestead, Culter Ridge and Florida City, suburbs and agricultural centers of the community. Gonzalez-Levy, who currently works at Florida International University in Strategic Partnerships, was with the Greater Miami Chamber of Commerce at the time. When they were able to get back to work, “we then with Dade County, police, and the firefighters, we visited the Homestead area. It looked like a war zone. We were blessed there weren’t more deaths.”

She credits Alvah Chapman, president of the Miami Herald, for creating a community response group known as “We Will Rebuild.” The Chamber then organized food and water delivery down to the affected areas, home to many farmers and agricultural workers. “We realized they lost everything. It was going to be an economic disaster,” she said. “We helped them, and the small businesses get back on their feet.”

But Miami’s homes and structures also needed to be built back up, literally. Elizabeth Plater-Zyberk is an architect, urban planner and faculty member at the University of Miami School of Architecture. She recalls the sea change in how structures were built after the storm. “Hurricane Andrew proved to be not so much a testing ground, but a kind of pilot project” for better building methods, she said. Plater-Zyberk said architects in the community came to her after Andrew. “This is our field, we should be able to do something,” she said. A planning group was formed to investigate how rebuilding could be encouraged, and even made better. “In the end, we had about 100 volunteers, in a vocational school that had remained standing,” she said.

According to the Insurance Information Institute, 250,000 were left homeless in Miami-Dade County, 25,524 homes were destroyed and another 101,241 were damaged after Hurricane Andrew. Many homes were made cheaply, with weak structural connections and poor materials not fit for high winds. “The most important thing is to strap the building down,” she said, “we all worry about holding the building up, so it stays up, but in Florida now the building codes have very strict rules.”

Those rules are the Florida Building Code, activated in 2002, which is known to be one of the most thorough in the country. “Under scrutiny, you’d see buildings are being built better, they’re more expensive,” Plater-Zyberk said, “but they can withstand extreme weather.” Despite that added cost, what Florida has gained on top of safer homes, is industry and innovation built around storm safety. Hurricane straps, a piece of metal hardware that reinforce the roof’s connection to the house, are now used in construction. Reinforced openings are also important. Once wind enters a house, it makes it a whole lot easier for the roof to blow off, which is why it is so important to protect “A whole industry of hurricane-tested windows had to be invented,” she said.

And that technology is still being tested. Florida International University operates the Wall of Wind test facility on its South Florida campus. This towering wall of 12 super-powered fans can produce Category 5 winds used to test life-sized structures. According to FIU, the Wall of Wind was directly inspired by Andrew’s power.

“I always thought what Hurricane Andrew did was it woke up Florida,” said Erik Salna, Associate Director at the International Hurricane Research Center at FIU, “it reminded us we are the hurricane capital of the United States.” If Andrew had an upside, it’s that it changed Florida for the better, according to Salna. “We became the leader in emergency management, hurricane research and mitigation, and we are an example to the rest of the country,” Salna said, “and all that comes back to Andrew.”

One of the biggest improvements made after Andrew was how emergency managers strengthened their network and their outreach. “The Florida Division of Emergency Management in Tallahassee then worked very closely with the counties, which then worked closely with the cities and municipalities within the county,” he said, “then at the county and city level, they go out and educate everyone and get them ready.” Salna also praised the building methods enacted after 2002, such as the aforementioned hurricane straps and also the ring shank nail, which has threads around the shank that help hold onto wood during high winds. “With every $1 spent on mitigation,” he said “$7 or $8 can be saved in recovery and cleanup. It makes good fiscal sense to build our structures stronger.”

Salna said there is a new facility in the works, with winds that can go up to 200 miles per hour. The new facility will also include a water tank, which the wind will blow over, in order to replicate storm surge. “The hurricanes we have had in recent years, like Hurricane Dorian hitting the Bahamas at 180 miles per hour” necessitate this new level of testing Salna said. The inclusion of water in testing is also very important, according to Salna, since the vast majority of fatalities in hurricane events are due to storm surge.

But there is one problem neither Salna nor anyone else has been able to quite crack: complacency from the public. As the saying goes, it only takes one storm to cause significant damage to life and livelihood, and Salna said, it doesn’t even have to be an Andrew-strength storm. “Each and every storm is dangerous,” he said, “it’s the old ‘just a’ phrase… it’s ‘just a’ tropical storm. Oh, it’s ‘just a’ Category 1. If it’s a tropical storm or hurricane headed our way, we need to prepare in every way that we can.”

Molleda, Gonzalez-Levy, Plater-Zyberk and Salna all expressed some level of concern for newcomers to Florida. Though Florida has seen many strong hurricanes after Andrew, few have had that pivotal, life-changing effect that Andrew had on those who lived through it. Salna gives a lot of credit to emergency managers and other hurricane educators, but “it’s human behavior, social behavior, and how everyone will respond that will get us to do what we need to do before a storm hits.”

“That’s the ongoing challenge,” Salna said, “to get people educated, to get people to understand what it is they need to do to get ready.”

Melissa Feito is a multimedia producer for Florida Storms and the Florida Public Radio Emergency Network (FPREN). Reach her with questions, story ideas or feedback at mfeito2@ufl.edu.
Previous The Point, Aug. 31, 2022: The new Alachua County School Board isn’t prioritizing a superintendent search
Next The Point, Sept. 1, 2022: Charlie Crist leaves Congress ahead of general election