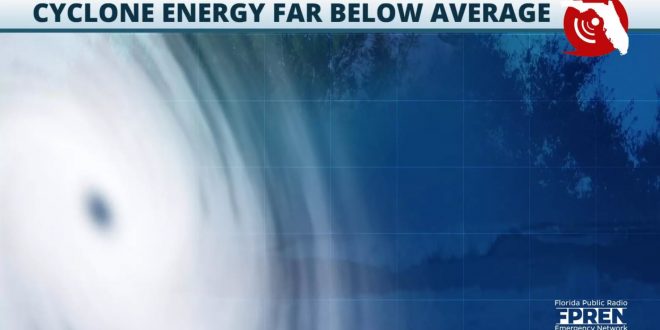 The Atlantic is experiencing a below-average level of Accumulated Cyclone Energy, known as ACE, for this period of the hurricane season. According to Brian McNoldy, Senior Research Associate at the University of Miami Rosenstiel School, as of August 26 the ACE will fall to just 13% of the average value of the past 50 years.

ACE is a metric that takes into account the intensity and the longevity of a storm. It is not the same as the total number of storms in a season, but rather the combined energy that the storms put out. McNoldy’s tweet illustrates how low this season’s ACE falls is compared to the historical average. So far, the Atlantic hurricane season has seen only three named storms, and they contributed “almost nothing” to the ACE value. As of publishing, low activity is forecasted for the next five days. “By the end of August,” McNoldy said, “it’s becoming a noteworthy low value.”

This is getting to be extremely unusual. It looks unlikely that there will be a named storm in the Atlantic through the next 5 days. As of Aug 26, the ACE will fall to 13% of the average of the past 50 years. The years since 1970 with lower ACE through then were 1988, 1984, 1977. pic.twitter.com/Th9LmIZzw3

It’s not clear why exactly activity has stayed so low. McNoldy said it may have to do with the the dry air in the mid-levels of the atmosphere. Saharan Air tends to be more common earlier in the season, but it is “very much a dry atmosphere” currently. The dry air has the effect of weakening tropical activity. And while we are currently in a La Niña period, which typically enhances the chances for tropical formation, something is still stifling the tropics. “Any one of these things is not the answer to everything, but they all are playing at the same time, week to week,” McNoldy said.

NOAA expects above-average activity for this season. And though we have yet to see neither plentiful not strong storms thus far, “it’s still on the earlier side to count the season out,” McNoldy said. “The majority of the most intense hurricanes typically don’t form yet.” Only if we reach mid-September “with the ACE still flatlining, it’s going to be hard to make it up in the second part of September and early October,” McNoldy said.

McNoldy emphasized that people should not rest easy for the rest of the season, as there is still time for a strong storm to form. He said one good example is the 1988 season. This season bore Hurricane Gilbert, one of the strongest hurricanes to form in the Atlantic. “The season ended with an average ACE, but it had a very low start.” Residents should still be paying attention to the hurricane season. “Whether we have an active or inactive season, it only takes one.”

Previous The Point, Aug. 24, 2022: From governor to school board to city commission, these are the primary results
Next Close to average temperatures for Florida this past month, below-average precipitation