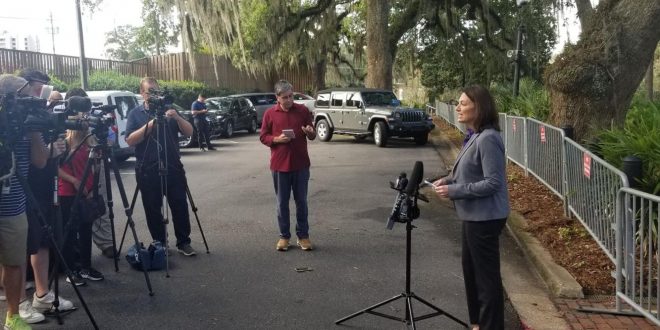 TALLAHASSEE — Florida Democratic gubernatorial candidates called out Gov. Ron DeSantis for comments he made after an unprecedented FBI raid Monday at the Palm Beach home of former President Donald Trump.

During a news conference Tuesday morning outside the governor’s mansion, Democratic candidate Nikki Fried said both political parties should tone down inflammatory rhetoric about the raid at Trump’s Mar-a-Lago estate and that the FBI and the U.S. Department of Justice should be allowed to conduct their investigation.

“We are all waiting for lots of answers from yesterday, and we all deserve them,” Fried, the state agriculture commissioner, said. “But we need steady leadership who uphold the American values, including the rule of law and civil discourse.”

The search was reportedly tied to Trump’s retention of classified material amid investigations into the Jan. 6, 2021, riot at the U.S. Capitol. It came as speculation swirls about Trump and DeSantis running for the White House in 2024.

“The raid of MAL (Mar-a-Lago) is another escalation in the weaponization of federal agencies against the Regime’s political opponents, while people like Hunter Biden get treated with kid gloves,” DeSantis tweeted, referring to the president’s son. “Now the Regime is getting another 87k IRS agents to wield against its adversaries? Banana Republic.”

Democratic gubernatorial candidate Charlie Crist, a congressman from St. Petersburg, issued a statement Monday night saying that “no one is above the law, not even a former president.”

“Gov. DeSantis’s knee-jerk partisan response to this law enforcement action proves yet again he is more interested in playing politics than seeking justice or the rule of law,” Crist said in the statement.

“Healing and uniting our state and nation starts with respecting the rule of law. If Ron DeSantis can’t understand that, or refuses to, he’s not qualified to be governor of Florida.”

But DeSantis was joined by other Florida Republicans in condemning the raid.

In a Twitter post, U.S. Sen. Marco Rubio, R-Fla., compared the raid to “something we have seen many times from 3rd world Marxist dictatorships.”

U.S. Sen. Rick Scott, R-Fla., on Tuesday tweeted that when Republicans have a majority in the Senate, there will be “thorough & aggressive investigation into the FBI’s raid of Mar-a-Lago.”

“Everything needs to be on the table for (U.S. Attorney General Merrick) Garland, including impeachment, if he doesn’t come out today and explain what happened,” tweeted Scott, who chairs the National Republican Senatorial Committee, which is leading efforts to elect GOP Senate candidates.

But Fried criticized DeSantis, as he and many other Republicans have kept quiet about the Jan. 6 storming of the U.S. Capitol by Trump supporters.

“He (DeSantis) won’t condemn January 6. But he has no problem attacking the FBI,” Fried said. “An FBI that is run by a director that was appointed by Donald Trump. Attacking our institutions and making threats about revenge if they gain power is un-American. We should always seek truth and justice.”