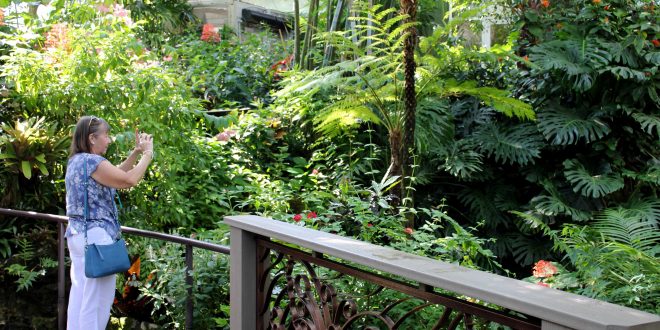 Visitors enjoy a sunny day at the Florida Museum of Natural History’s butterfly garden on the morning of July 5, 2022. (Brooke Johnson/WUFT News)

Green pastures full of native, colorful flowers scatter the University of Florida’s campus as part of a new plan to help protect the pollinators of Florida.

The McGuire Center for Lepidoptera and Biodiversity, a section of the Florida Museum of Natural History, has paired with UF to research simple ways for Gainesville residents to help conserve wildlife.

According to the McGuire Center’s website it is one of the largest education, research and collection centers in the world for butterflies and moths. Located on UF’s campus, it houses more than 10 million specimens.

Jaret Daniels, curator, has been working at the museum since 2012 as a specialist in the rare decline of insect species.

Within recent years, he said that concern for native biodiversity and ecosystems has increased, leading scientists to look for solutions. One goal of the center is to educate and encourage the public to buy insect-friendly plants that will attract native pollinators such as bees and butterflies.

“We hope to provide consumers with more choices to help wildlife,” he said. “Suburban yards and neighborhoods can become safe havens that provide resources for pollinators.”

Daniels said that the center’s research is popular with the public because of gaps of information between scientists and people. Little is known about these insects, but they are interesting creatures.

The center works to help species by captive breeding and habitat restoration, while also working to educating the public about the importance of insects and biodiversity.

“We work with butterflies, which is a charismatic group,” he said. “We often attract families and children, which helps to show that anyone can be a scientist.”

Daniels said that he hopes one day that the ecosystem will be in a stable condition where conservation is no longer needed.

“However, conservation isn’t an overnight project,” he said.

He said he believes it is something that will take a lot of time and effort.

UF’s Florida-Friendly Landscaping Program has a list of nine principles to help Florida residents preserve native species such as butterflies and moths.

The first principle of the program is Right Plant, Right Place. It is the importance of choosing Florida-Friendly plants and turf, and removing invasive plants from a yard.

The goal of these selections is “to buy quality plants that welcome wildlife.”

Daniels said that the university has worked to maintain conservation areas around campus, creating wildflower meadows.

He said that UF students should understand the value of biodiversity, and they should know where these conservation areas exist.

“By learning how to manage these landscapes more effectively we are helping the environment,” he said.

Kaitlyn Tucker, 21, said that endangered species need to be preserved so that they can be enjoyed by future generations.

As a student without an affiliation to the McGuire Center, Tucker said one way the museum and university could raise awareness is by planning for outreach events.

“These events could be hosted by the Florida Museum of Natural History,” she said. “With the goal of spreading awareness to both students and families.”

When she was a child, Tucker said that outreach events, such as the ones she would like to see in the future, exposed her to the science community, and led her down the path to becoming a passionate conservationist.

Keith Willmott, curator and program director, said it’s his job to bring in grants and money for the center. Continuous research is important because insects are a good indicator of change within the environment.

“A lot of scientists are constantly looking at the decline of insects,” he said.

With the possibilities of new discoveries even after working for only a year, research at the lab is always encouraged for everyone.

“Volunteer projects can lead to real projects,” Willmott said. “Students can find different ways to get involved by doing things such as gathering data and gaining lab skills.”

“Butterflies and moths are an attractive group from a recreational aspect,” he said.

“Because of this, it is easy to make the public interested in insect conservation.”

Toshita Barve, 22, said that she believes it is important for everyone of all ages to be concerned with conservation research, especially regarding butterflies and moths.

“A lot of people think insects are gross,” she said. “They’re afraid of them.”

However, insects are some of the most important factors within the ecosystem. They help to pollinate plants, disperse seeds and are a major food source.

As a student assistant at the center, Barve said she thinks the museum is a simple way for children to understand the importance of bugs and science.

“The museum is a great way to look at how research is done,” she said. “There is a literal glass window to look into the labs, and you can see scientists working.”

She said that by showing the behind the scenes of research, people will become more educated, curious and concerned.

Outside of the lab, the university is trying to integrate ways to help native insects. UF has created new landscapes and gardens, and changed mowing schedules to grow native flowers.

Barve said that students can also help with the campuswide effort by purchasing Florida plants to put into their yards and balconies.

Although it might seem difficult for students to find these plants, she said that the museum often hosts a plant sale full of native flowers, trees and bushes that can be used in residential landscaping.

Actions such as planting flowers will go a long way, she said.

Brooke is a reporter for WUFT News who can be reached by calling 352-392-6397 or emailing news@wuft.org.
Previous The Point, July 25, 2022: Today is the deadline to register to vote or change your party affiliation in Florida
Next The Point, July 26, 2022: Gas prices continue falling in Florida