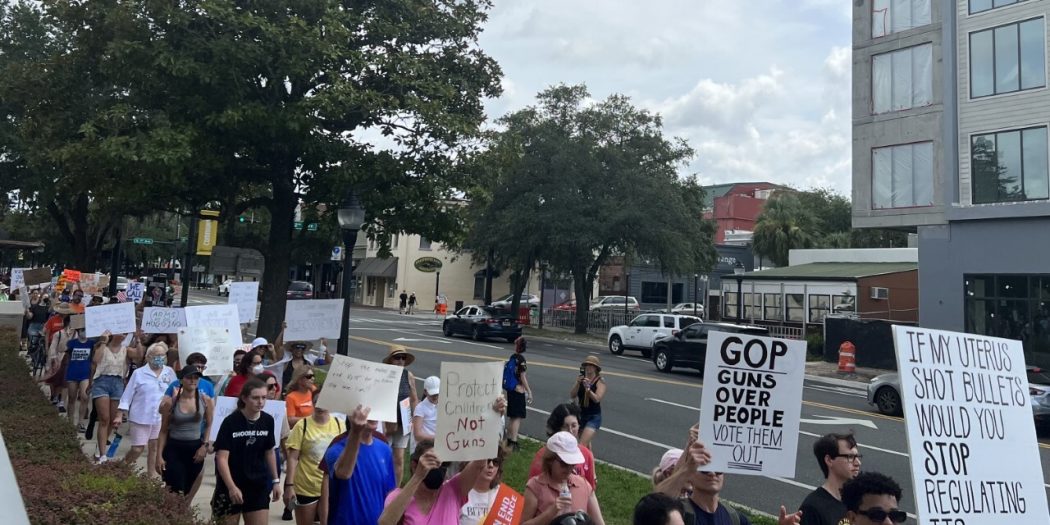 Gun safety advocates march along South Main Street in Gainesville on Saturday. They were headed toward Depot Park as part of a local March for Our Lives protest. (Carissa Allen/WUFT News)

A wave of deja vu washed over Brooke Abzug as she protested the recent nationwide increase in mass shootings wearing a burgundy MSD Strong T-shirt.

On March 24, 2018, the Marjory Stoneman Douglas High School alumna marched from Bo Diddley Plaza for her life and the lives of the 17 students and staff lost in Parkland.

“It’s a really weird feeling,” she said. “I was remembering what it was like four years ago.”

Abzug, now a 25-year-old UF graduate student, was among nearly 300 protesters who marched from Bo Diddley Plaza to Depot Park, where a rally and candlelight vigil ensued Saturday afternoon. The protest was one of hundreds of March for Our Lives demonstrations across the nation.

But after 21 students and teachers lost their lives at Robb Elementary School in Uvalde June 2, students, parents, teachers and elected officials took to the streets. Again.

As protesters gripped signs that read “Arms are for hugging” and chanted “No more shootings” along South Main Street, the message was clear: Gun control inaction from lawmakers in Washington will no longer be tolerated.

Odyscea Kian, a 38-year-old Gainesville mother who attended the march, called Sen. Marco Rubio’s office and cried on the phone to a legislative aide, thinking of her two children. Her son, Roman, is a fourth grader — the same grade of the children lost in the Uvalde school shooting — and her daughter, Lara, is a kindergartener.

Amid discussions about safety precautions against school shootings, she said there is not enough focus on kids who cannot comply with school safety measures.

“There are kids who are disabled physically, obviously, and mentally like my daughter,” she said, wiping tears from her eyes hidden behind sunglasses. “They can’t hide. They can’t stay still. She’d get her whole class killed — that is a heartbreaking thing to say.”

As a substitute teacher, Kian fears for the safety of both her children and her own students in school. She is horrified that gunmen continue to target schools: the one place children are most vulnerable without their parents to protect them.

Tragedy after tragedy, she is left heartbroken, nauseous and angry.

Jennifer Dungan, 43, channeled her anger into activism. She volunteers with Moms Demand Action, a grassroots gun violence prevention group. Stationed beneath a red tent throughout the rally, she taught protesters how to contact representatives and amplify their frustrations.

BeSmart, Peaceful Paths, the Florida Forward Coalition and UF College Democrats were among other advocacy groups tabling at the park for gun safety measures, too.

Dungan said she became a Moms Demand Action member for her 14-year-old son and 9-year-old daughter, who have not had the joy of knowing school without lockdowns.

Random active shooter drills in Alachua County classrooms, where students turn their desks into makeshift barricades and hide behind bookshelves, have given her children relentless anxiety about gun violence and school shootings, she said.

“My teenager has become accustomed to scoping out the nearest exits and closets in every room,” she added. “He prefers the seats farthest away from the entryway and the windows. These are not unfounded fears; they are the reality of school in America.”

This reality was evident on Valentine’s Day during Mia Engelbart’s freshman year of high school at Marjory Stoneman Douglas.

Engelbart, now a UF sophomore, attended the rally to honor her friends and classmates who could not be there. She pledged to do everything in her power to prevent the way they died.

“I’m here because I was on the soccer field with Alyssa Alhadeff the night before her life was taken,” she said. “I hugged her mom at a vigil the night after her death. I sat behind Luke Hoyer in Spanish class, and after the shooting, I sat behind this emptiness.”

Though Florida has been spared of another mass school shooting, the state’s schools are still blighted by gun violence. Since the Parkland massacre, the Center for Defense and Homeland Security has documented over 30 school shootings in Florida.

Exasperated by the gun violence epidemic, Engelbart pleaded, just as she did in 2018, for Florida lawmakers to pass stricter gun laws that may prevent other children from living through the trauma she has endured.

She can only hope this time is different.

Carissa is a reporter for WUFT News who can be reached by calling 352-392-6397 or emailing news@wuft.org.
Previous Driver in fatal hit-and-run of UF student sentenced to 6 years in prison, loses license for decade
Next Watershed: High Hazard: State report shows risks of the aging Rodman Dam