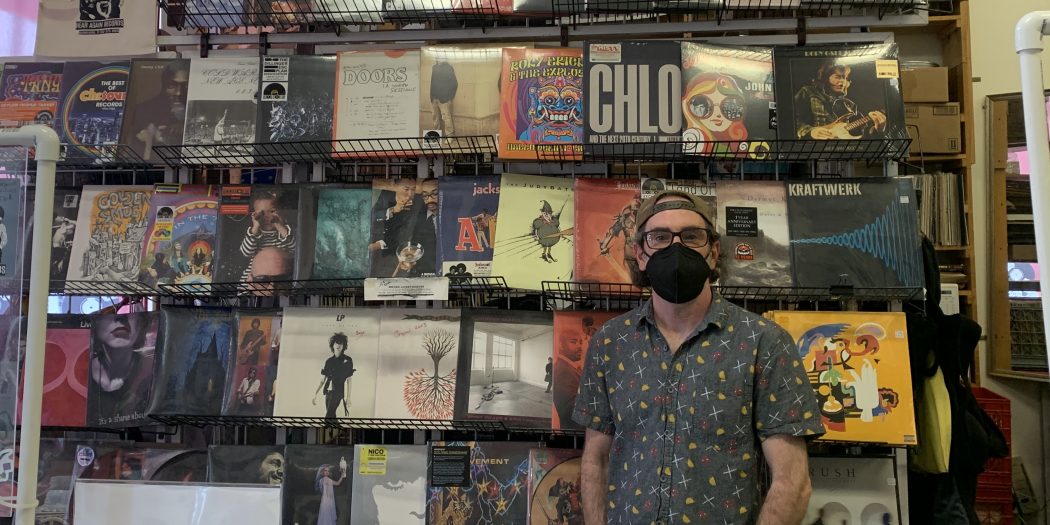 Hear Again Record’s owner Andrew Schaer has worked at the store since 1995 and inherited the business in 2009. (Joseph Henry/WUFT News)

He remembers hearing the record “Broadway and 52nd” by Us3, a group known for its melding of jazz and hip hop, playing through the sound system as he browsed the store.

Funk asked to purchase the record, and Andrew Schaer, the store’s owner, threw in a free CD copy of the band’s album “Hand On the Torch.”

Eight years later, Funk has remained a faithful customer, only taking a break from routine trips when he found himself spending too much money.

“(Schaer) is in it for the culture and for the scene as well, besides just a cash grab because records are trendy,” Funk said. “I can tell he really puts his heart and soul behind what he does.”

As a local DJ and bassist of punk band The Real You, Funk is intertwined with two inherently opposite sides of Gainesville’s music scene. Without the constraints of a specified genre or vibe, Hear Again operates similarly.

Schaer, 45, began working at the store well before it transitioned to primarily stocking vinyl. In 1995, while a student at Gainesville High School, Schaer got a job at Hear Again. He carried it all the way through — and well beyond — his years as a student at the University of Florida.

When Perry Johnson, the store’s original owner, retired in 2009, Schaer inherited the business with a vision. Selling CDs wasn’t a viable business anymore; illegally downloading music was on the rise, he said.

The public’s desire to own music in a physical medium persisted, however, and soon records were all the rage.

“[Records] were more appealing,” Schaer said. “The sound quality was better as long as they took care of them, and it’s just more of an engaging listening experience.”

Schaer bought and moved Hear Again to its current location at 201 SE First St. in 2009.

Marcus Armband lived in Gainesville from 2015 to 2019 while studying philosophy and English at UF. Armband, 25, had friends who lived at Arlington Square Apartments, a short walk from the Hippodrome Theater — Hear Again’s neighbor of 13 years in the heart of downtown.

His love for music expanded during his collegiate experience, and frequent trips to Hear Again contributed to its growth. On Armband’s second visit to see Schaer, a certain record caught his eye.

A copy of Arctic Monkeys’ 2009 album “Humbug” became the first record in his collection. Now, three years removed from his time in Gainesville and currently living in Tuscaloosa, Alabama, for law school, Armband estimates he owns over 80 records, five of which came from Hear Again.

Armband’s friends’ residence around the corner meant parking was never an issue for him, but in recent months — right off the heels of the height of the COVID-19 pandemic — the city began to push for the conversion of downtown’s free two-hour parking into paid spaces.

A trial period in January led to major pushback from the restaurants, bars and stores whose customers benefit from parking just steps from business doors, including Hear Again.

“What we saw during a three plus week trial period was just empty parking spaces all day long,” Schaer said. “My revenue was cut in half. It was painful and horrible.”’

The vocalization of business owners and community members prompted the Gainesville City Commission to delay any further decisions concerning parking until June 1. Schaer plans to once again oppose the change and always has a petition on Hear Again’s checkout counter.

Even with challenges to business ahead and in the past, Schaer perseveres because he knows the importance of vinyl. Thousands of records populate the store, waiting to go home and join a new, unique collection that may be shared or traded with its owner’s record-crazy comrades.

Schaer understands the social dynamics that spawn from owning records. The medium’s renewed interest is not just a trend, he said, it is an actual pastime — one that younger generations are carrying on.

When it comes to helping preserve the longevity of record stores, Schaer said the younger the customers, the better.

Schaer recognizes the benefits of the college demographic and the youthful energy they bring to the store. He takes note of the types of music they enjoy and how it trends more toward current titles rather than classics.

He appeals to the college and high school crowd by operating an up-to-date and lively social media presence. Check-ins on what’s new in the store’s crates draw in customers who’ve been on the hunt for a specific title.

“I started [posting on social media] when I realized everybody was looking at their phones probably equally as much as they were looking around everywhere else,” Schaer said.

Accounts on Instagram and Facebook also keep Gainesville’s record-loving community in-tune to when the store is hosting special events, like the annual Record Store Day, or when Schaer calls upon extra support.

Record collectors and those who wish to see local businesses thrive are all over Gainesville. They have supported Hear Again through the best and worst of times with a passion for music in the vinyl medium serving as the throughline.

“It speaks measures for what people want versus what otherwise might get cramped down your throat, like a digital format,” Schaer said. “People are like, “No, we want records,” and they are showing up in droves for them.”

Joseph is a reporter for WUFT News who can be reached by calling 352-392-6397 or emailing news@wuft.org.
Previous Watch live: The Jan. 6 committee holds hearing
Next Baby formula shortage is causing families to scramble in Florida and around the US