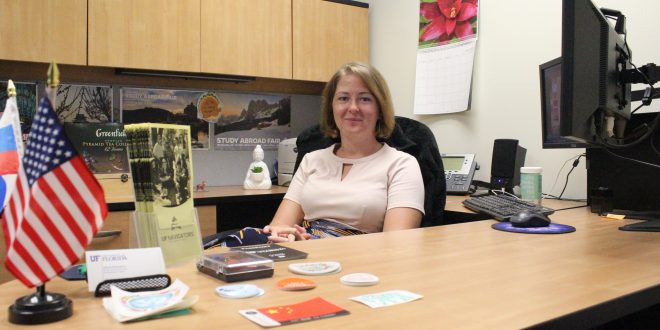 Maria Selezneva sits in her office at the University of Florida International Center May 24, 2022. "We're proceeding as normal," Selezneva said. (Ericka Garcia/WUFT News)

One email could change everything.

“I was really elevated,” Rose Jacques said, “but then everything came crashing down.”

Jacques, a University of Florida junior majoring in international studies and Japanese studies, is one of 60 students who have been waiting to study abroad in Japan since the country closed its borders in 2020.

Jacques applied to the exchange program in Kansai Gaidai University in the spring of that year. But, during the summer, she received an email from the university stating the program had been canceled due to the COVID-19 pandemic. Since then, she has been waiting two years for the opportunity to study abroad in Japan.

“I was really devastated at first because I was looking forward to this since high school,” Jacques said.

Rajudarshan Persaud, a third-year majoring in computer science and Japanese, is another student who applied to the exchange program in Kansai Gaidai University.

“I was very interested in the language, and I wanted to immerse myself in the culture,” he said.

The continued cancellation of the program had major impacts on students like Persaud and Jacques.

“I had a very rough time trying to figure out how I was going to graduate on time,” Persaud said.

Jacques, on the other hand, lost a $10,000 scholarship after the program was first canceled.

Maria Selezneva, the adviser for Russia, Southeast Asia and Law programs at the University of Florida International Center, was also troubled by the situation.

Selezneva had to update academic advising forms and work directly with each student’s adviser each semester.

“It was really hard,” she said. “We didn’t know how this pandemic would unfold.”

Despite the complication, Selezneva is hopeful for students in the upcoming year.

On March 1, 2022, Japan reopened its borders to all international travelers, excluding tourists. Four students were able to go to Japan this spring, and 17 more students have been confirmed to go this summer.

“Since this past semester ended, things are looking a lot better,” Selezneva said.

Students will hear final decisions from the individual universities in June and July.

“I’ve been on this emotional journey with the students the entire time,” Selezneva said, “and we’re not giving out easily.”

Ericka is a reporter for WUFT News who can be reached by calling 352-392-6397 or emailing news@wuft.org.
Previous The Point, June 6, 2022: Sentencing expected this week in fatal 2020 hit-and-run case that killed UF student Maggie Paxton
Next The Point, June 7, 2022: State audit questions accuracy of Florida’s COVID-19 data