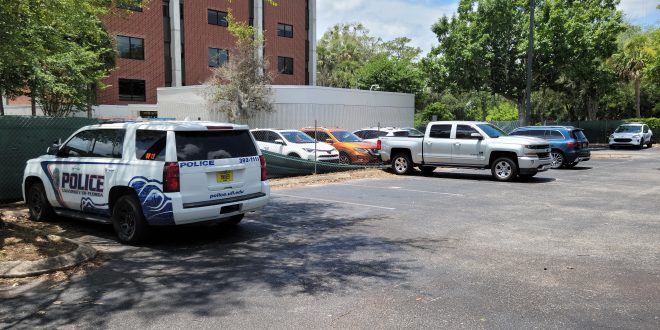 Andre Delano Haden Kerley, 33, caught the attention of Victor Beguiristain, a UF police officer, after weaving dangerously between vehicles while northbound on Southwest 34th Street Friday evening. Prior to being formally stopped, Kerley pulled over and stepped out of his car. When Beguiristain approached, Kerley complained his tire was low on air. He told Beguiristain that his car, a green Dodge Charger, was brand new and that he, too, was a police officer.

Kerley then held up a silver UF police badge belonging to one of Berguiristain’s colleagues, the report states. UF police has roughly 90 officers, according to its website, and Berguiristain did not recognize him. He was immediately arrested on charges of impersonating a law enforcement officer.

The badge Kerley waved was pilfered from an officer’s personal vehicle he was hired to detail, according to an affidavit released Wednesday.

Hours before his arrest, Kerley tried using the badge to score a complimentary fountain drink and bag of chips from the Gate gas station on Northwest 13th Street.

Kerley approached the counter wearing a gray short-sleeved hoodie with the badge affixed to his necklace, the report states. With chips and drink in hand, Kerley then asked the clerk to comp the items. When the clerk told Kerley he had to be in uniform, Kerley told him, “I’m undercover. We ain’t never in uniform.”

Kerley then asked the clerk for his name so he could file a customer service complaint before returning to his green Dodge Charger flashing blue and red police lights.

Kerley could not be reached for comment. The Alachua County Sheriff’s Office prohibits news organizations from interviewing inmates without signed approval from their defense lawyer and the county’s jail director.

Deborah Phillips, Kerley’s court-appointed lawyer, did not respond to multiple requests for comment.

Kerley is being held in the Alachua County jail on $12,000 bond.

This isn’t Kerley’s first run-in with local authorities. On May 8, Kerley was arrested by Gainesville police for battering the manager of a nearby car wash after he was asked to leave the premises, according to an affidavit.

The manager identified Kerley as driving a green Dodge Charger with the word “Bama” displayed on the windshield. Kerley was released without bail the following day.

While Kerley doesn’t appear to have a criminal record, he has previously faced criminal charges for identity theft and battery. In June 2018, police in Deerfield, Illinois searched Kerley’s car after a traffic stop and found a personal bag filled with stolen IDs and credit cards. While Kerley said he found them in a parking garage and intended to return them to their owners, investigators determined he’d been using the credit cards for personal use. Prosecutors from Cook County, Illinois told the Chicago Tribune reporter Kerley was wanted on a domestic battery charge.

Kerley negotiated a deferred prosecution agreement in the Deerfield case and pleaded guilty to a misdemeanor identity theft charge. He was sentenced to two years probation, and the identity theft charge was dismissed early last year, court records show. No records of a domestic battery charge were found during a search of Cook County court records.

While it’s unknown what ties, if any, Kerley has to the area, North Carolina records show he registered to vote in Charlotte in July 2018 – one month after being arrested in Illinois. Kerley voted in the November election later that year, according to North Carolina voter rolls. An arrest form filed by UF police lists his current residence as a home in Indianapolis.

This isn’t the first report of a UF police officer having a badge stolen. In December 2020, two car break-ins occurred at a department parking lot on Southwest 2nd Avenue.

Among the items reported stolen were a police badge, a purse containing a Taurus .380-caliber handgun, credit cards, Social Security and passport cards and a “Hello Kitty” face mask. A person with knowledge of the crime told police a shotgun had been stolen from a UF police patrol vehicle there, as well.

At least four thefts have occurred at the lot since police officers began parking there in 2020. The latest report was filed Friday night, just hours after Kerley was arrested.

Bryce is a reporter for WUFT News who can be reached by calling 352-392-6397 or emailing news@wuft.org.
Previous Max Weinberg’s Jukebox spins hits in Ocala
Next Gainesville’s new senior housing strategist on the affordable housing shortage