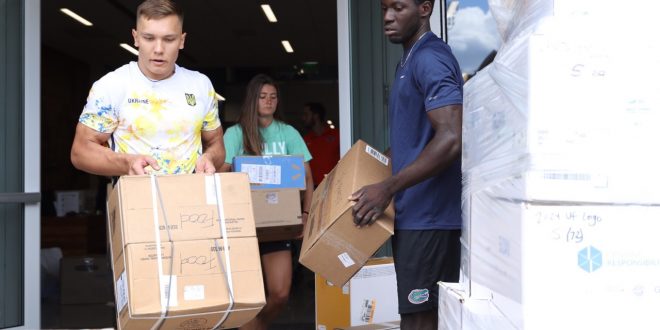 Anton Svirskyi, a biomedical engineer and student-athlete on the University of Florida’s swimming and diving team, launched the Ukrainian humanitarian drive last month and has since seen an impressive response.

The drive aims to collect donations and supply them to his home country. Some of those include his family and friends, who do everything they can to support their country.

Svirskyi added that his grandmother has been baking food for the Ukrainian military, and after recovering from a heart attack, his grandfather eventually went off to build barricades.

Once the invasion began in February, he thought the drive was a way to educate  Alachua County about the issues while being away from his home country.

The drive started on April 11 and ended on April 29, with 100 boxes of donations collected.

Svirskyi added that Ukrainian Student Association President Sasha Nelson contacted Umana, which has offered to pick up all the supplies free of charge. Located in Chicago, Umana is a charitable organization that works to assist Ukraine.

WUFT · The donation drive for Ukraine

As it’s currently in Chicago, it will eventually leave to arrive at the Ukrainian city of Lviv. From there, a convoy will protect the donations as they will be delivered to Svirskyi’s home city of Zaporizhzhia.

He said they’re trying to communicate with some government services so they can go forward to help refugees settle in some houses. In doing so, they can exert conditions more comfortably.

Troinavovskyi added that neighboring cities have experienced a new wave of hunger and destroyed their buildings.

From building barricades to taking part in combat, Troinavovskyi credits Svirskyi and his mom Iryna Zavalko for helping organize the drive. Zavalko, a member of Ukraine Dream 21, has a background in law and helped with the logistics.

Svirskyi said he hopes this keeps going but they cannot win this war by themselves and need as much help.

All three are very thankful to the Gainesville community for coming together and supporting the cause.

Elliot is a reporter for WUFT News who can be reached by calling 352-392-6397 or emailing news@wuft.org.
Previous The Point, May 20, 2022: UF holds evening vigil to honor the lives lost in Buffalo shooting
Next The baby formula shortage could be temporary, experts say, and here’s how Floridians can get through it