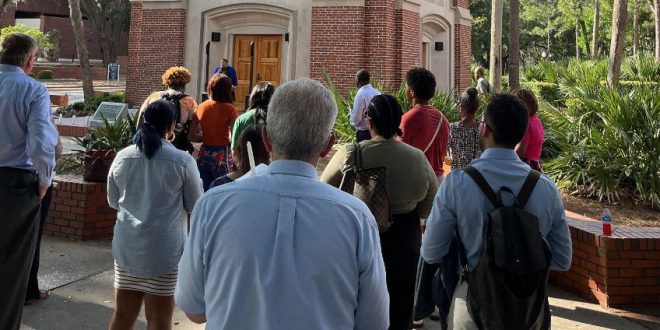 Some 900 miles away from Tops Friendly Market in Buffalo, New York, a glimmer of hope radiated Thursday night from the candles beneath University of Florida’s Century Tower.

Communities continue to mourn the lives of those lost after a gunman with stated racist motivations killed 10 on Saturday in Buffalo and left three injured. Thursday morning, UF announced that a candlelight vigil would be held in remembrance of those whose lives were taken on Saturday.

“I needed to take time to breathe,” said the university’s Director of Multicultural Affairs, Patricia Jordan, after learning about the attack, “and then when we were ready as a collective community to come together, it was a pretty quick turnaround to saying ‘yes, we need to have this space.’”

In front of a crowd of about 60 people, Pastor Gerard Duncan of Prayers by Faith Outreach Ministries in Gainesville delivered a prayer and powerful message about the importance of unification in times of such tragedy.

“Unity is our strength. Division will forever remain our weakness,” Duncan said. “We must learn to live together as brothers and sisters or perish together as fools.”

Fighting back tears, Chief Diversity Officer and Senior Advisor to the President, Marsha McGriff, read the names of the 10 victims as candles were lit in their memory.

“I was reminded that it is important to make space to mourn those who are lost by senseless violence,” said McGriff in regards to the importance of the vigil.

Following the lighting of the candles, Gainesville native Casey Jones performed “Amazing Grace,” before the crowd in such a version that even the commotion of buses and scooters on Newell Drive could not drown out the commanding lyrics of such a reverent, communal environment.

International student Shambadeb Basu said he felt as though his participation in the unification following grief and loss is important for tragic events.

“I felt like sharing my emotion with these people over here in whatever little way I could,” said Basu.

From the speakers delivering the powerful messages to the supportive crowd, there was an overwhelming feeling of community among those gathered at the base of the tower.

For McGriff, the feeling of family was strong.

“I’m so proud to work here,” McGriff said tearfully. She was hired at UF about six months ago. “Amazing, humble, focus committed community at UF represented in our students, our faculty, our staff and community. There’s such a strong family here and I am hopeful that the rest of the world can see that story.”

As time marches forward, Jordan feels as though the vigil will create a sense of communal hope amidst such a tragic event.

“It means hope for me in a hopeless moment,” she said. “To see a group of folks come together and understand that mourning and thought is needed to be rebuilt within our community, it means a lot to me.”

Jonathan is a reporter for WUFT News who can be reached by calling 352-392-6397 or emailing news@wuft.org.
Previous Healing Vets Craft Program assists veterans at High Springs library
Next The Point, May 20, 2022: UF holds evening vigil to honor the lives lost in Buffalo shooting