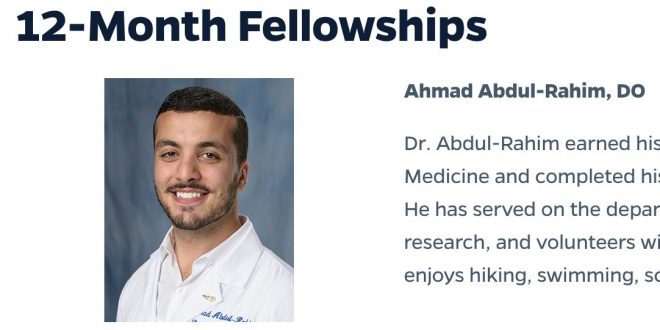 Ahmad Abdul-Rahim, 31, of Gainesville pleaded not guilty Tuesday to allegations of false imprisonment, robbery by sudden snatching and battery after the employee reported the incident to UPD’s Office of Victim Services on March 28. Abdul-Rahim, pictured in this screenshot, was hired for a 12-month multidisciplinary pain medicine fellowship last August. (UF College of Medicine)

May 12, 2022 Education, Health and Science, Law and public safety

An osteopathic physician with the University of Florida College of Medicine’s anesthesiology department has been placed on paid leave after UF Police filed a criminal complaint after an administrative assistant accused him of sexual misconduct in March.

Ahmad Abdul-Rahim, 31, of Gainesville pleaded not guilty Tuesday to allegations of false imprisonment, robbery by sudden snatching and battery after the employee reported the incident to UPD’s Office of Victim Services on March 28.

Abdul-Rahim was hired for a 12-month multidisciplinary pain medicine fellowship last August, according to a press release.

The woman was working at Shands Hospital on March 22 when Abdul-Rahim approached and briefly chatted with her before closing her cubicle’s sliding door. He then positioned himself near the exit, preventing her from leaving, according to the complaint.

Abdul-Rahim began making sexually explicit comments and derogatory jokes, asking if she had nude photos of herself on her phone. She said Abdul-Rahim grabbed her phone and began thumbing through her photos. After taking her phone back, he grabbed it again and resumed searching, the complaint said.

After returning the phone, Abdul-Rahim squeezed the woman’s thigh before moving his hand to her groin area. After she protested, he apologized and told her he couldn’t think about anything other than having sex with her, according to the complaint.

Startled by the sound of a nearby door opening and closing, the woman said Abdul-Rahim removed his hand from her body, straightened himself up and told her to schedule a meeting for him before walking out, the complaint said.

He has not been arrested, and prosecutors are still determining if formal charges are warranted. Neither he or his attorney responded to multiple requests for comment.

Abdul-Rahim is on paid leave pending the completion of an internal investigation, according to Cynthia Roldán, a university spokeswoman. No formal complaints or disciplinary actions have been filed with the Florida Department of Health, according to its website.

This is not the first time an anesthesiology department employee has been the subject of a sexual misconduct inquiry.

In March 2021, Jason Campbell, better known as the TikTok Doc, was placed on paid leave after it was discovered he was the subject of a sexual harassment investigation by Oregon Health & Science University — his previous employer.

Campbell was found in violation of OHSU’s harassment policy in August 2020 after groping a female colleague without consent as well as sending her inappropriate messages and unsolicited sexual pictures of himself. Campbell resigned from UF in September 2021 following a seven-month investigation.

Campbell had not formally begun his work on UF’s campus before he was put on paid leave and wasn’t in contact with patients or personnel in UF Health’s clinical learning environment prior, said Ken Garcia, the former communications manager for UF Health, in October 2021.

Representatives from UF and UF Health said the university has zero tolerance for harassment or sexual misconduct. All UF employees are required to complete anti-harassment training when hired.

Sexual harassment at UF is not unusual. Of 6,561 respondents to a 2019 campus climate survey, 30.1% of undergraduate women and 7.7% of undergraduate men reported experiencing nonconsensual sexual contact by force or inability to consent.

Among graduate students, 19% of women and 3.9% of men experienced similar behavior.