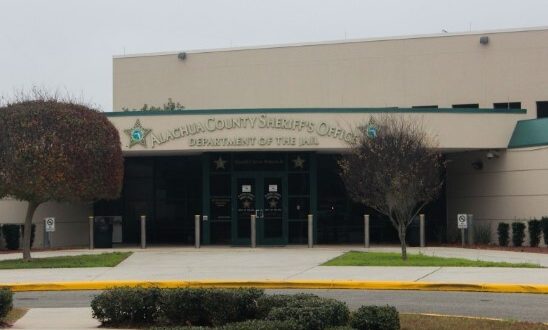 “Importantly, it is my belief that Mr. Brewton will not commit crimes in the future and that he does not pose a threat to public safety,” Antoon II wrote.

Inmate Erica Heaven Thompson in August gave birth at the jail to a premature baby who later died at a local hospital. The death sparked outrage in the community and led to demands for changes in the care of pregnant inmates.

Capt. Kaley Behl of the sheriff’s office began drafting the new policies in late December, and pressure continued to mount when County Commissioner Marihelen Wheeler sent Sheriff Clovis Watson Jr. a letter in January, requesting that he institute new policies to ensure the health of pregnant inmates at the county jail.

Watson released a statement following an internal investigation in December, stating there was no misconduct or violation of jail policies.

In her letter, Wheeler acknowledged the sheriff’s assertions but wrote that the circumstances demonstrated “the current policies were inadequate in protecting pregnant inmates.”

The jail’s contracted medical service evaluated and cleared Thompson when she was brought to the jail, despite her voicing concerns over contractions. Wheeler suggested bringing pregnant inmates to the hospital prior to being brought to the jail.

Watson in January responded to Wheeler’s letter with a three-page letter of his own in which he stated his office was in the process of selecting a new medical provider for inmate care, after giving notice to Corizon Health in July — before the death of Thompson’s baby — that it would not be retained.

His office recently signed a contract with Wellpath Care, a Nashville-based healthcare company that specializes in patient care in correctional facilities, psychiatric hospitals and residential treatment facilities, Behl. The new contract began on Feb. 1 and totals about $20 million for the next 3 years and 8 months.

Wellpath, formerly named Critical Care Solutions, made national news after an investigative report from CNN alleged the company had a history of malpractice and inadequate care.

An updated copy of the jail’s policies includes a provision stating that pregnant arrestees must be medically cleared at a hospital prior to being admitted to the jail. It also added the word “pregnancy” to the list of pertinent issues inmates should disclose to the booking officer when they arrive for processing.

Medical staff would be required to provide a pregnancy test for a detainee claiming to be pregnant when it is not evident.

The commission will cover the new costs that these policies may incur, though it was unclear how much that would be yet, Wheeler said. She expects all costs associated with these policies to be billed to the county on a case-by-case basis, rather than as a lump sum of money.

The policies were published May 4 after the sheriff’s office obtained all 19 signatures required for implementation, as well as Watson’s final approval.

A similar policy was proposed in the Florida Legislature last October in a bill titled “Ava’s Law,” after Thompson’s infant. The bill sought to enable every incarcerated woman the opportunity to be pregnancy tested if she requests one upon incarceration. It would also allow pregnant women to defer their sentences until a specified time after delivery.

It passed unanimously in the Florida Senate but died in the House Criminal Justice and Public Safety Subcommittee because the subcommittee ran out of time during session amid the other bills it had to review.

The bill would need to be proposed again next year if it is to become state law.

With failed legislation and policies awaiting implementation, not everyone is convinced the changes are enough. Karine Dieuvil, an organizing co-lead for advocacy group Goddsville Dream Defenders, said she believes these policy changes are more for show.

“They are making all of these policy changes, yet they are not taking accountability for what they did,” she said. “It means to me that there is no intention in actually rectifying the situation. There’s no real investment in making sure this never happens again.”

The Goddsville Dream Defenders partnered with Florida Prisoner Solidarity and Dignity Power to hold a protest in front of the jail two weeks after the incident and have continued their efforts to seek justice for the Thompson family.

Thompson and her attorney Ben Crump, a high-profile lawyer nationally who has represented families in the George Floyd, Michael Brown and Trayvon Martin cases, announced in October that they intended to sue the sheriff’s office for violating the Tammy Jackson Healthy Pregnancies for Incarcerated Women act, which requires pregnant women be taken to an appropriate medical facility when they are going into labor. No lawsuit has been filed yet.

Watson was unavailable for comment, after several attempts to reach him through his assistant.

In his January letter, he said that he sought to work with the commission, not against it, noting that he decided to not see Wheeler’s letter from a month prior as a “mistaken indictment” against the “exceptional employees” in his department.

Wheeler said she was surprised by the tone of the letter, adding that she did not intend it as a slight against him or his leadership but rather as a joint effort to protect county residents, and in particular inmates and their infants.

“The only finger pointing we ought to do is at the problem,” she said. “The people running the city, the county, the sheriff’s office – we’re all friends. We’ve known each other for a long time.”

She noted, however, that it was important to push each other for progress.

“If everyone was in agreement, we would just end up with a lot of people saying yes,” she said. “The ‘pushing’ part is to get the best plan possible.”

Sarah Breske is a reporter for WUFT News who can be reached by emailing news@wuft.org.
Previous The Point, May 11, 2022: Several Florida property insurers are seeking to raise rates by over 20 percent
Next The Point, May 12, 2022: A nearly $1 billion settlement is reached in the Surfside lawsuit