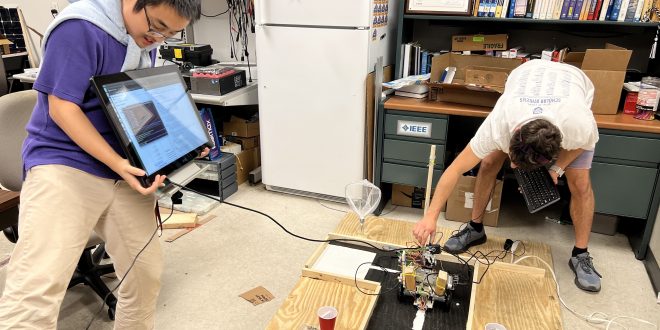 Luke Rouleau rose from a two-hour nap in a Mobile, Alabama, hotel room on April 1, awoken from a sliver of the dozen hours of sleep he had enjoyed over the last week.

The 21-year-old computer engineering major saw his partner, Xuanhao Shi, hunched over the robot the pair had worked on since November — the same robot set to compete in the qualifying round of the Institute of Electronics and Electrical Engineers, IEEE, Southeastern Conference robotics competition the following morning.

“I went and tapped on his shoulder, and he turned and looked at me and his eyes are just empty, nothing was there,” Rouleau said. “I was like ‘How’s it going?’ And he’s like ‘Uh, I exploded the battery.’”

Rouleau later learned Shi, a fellow victim of exhaustion, dozed off while the battery charged and eventually combusted. The remains of the battery sat in the hotel bathroom with the competition hours away.

Despite the 11th-hour crisis, the pair guided the autonomous robot, affectionately nicknamed “Bobert,” to third place in the regional competition, which took place April 1 to 3. The UF student branch of the IEEE organization also returned to Gainesville with first-place awards for ethics and community service.

But in the early hours of April 1, Rouleau and Shi crouched over their senior design project, the clock now an even more formidable foe. They attempted to charge a spare battery, but Rouleau suspected the first failure inhibited the charger, and the backup came apart in front of their eyes.

The competition intended for robots to pick up chains of beads (in accordance with the convention’s Mardi Gras theme) and place them in a net for points while navigating a short course. Without a battery to power their robot’s arm, the UF students removed it and chose to focus on navigation.

“We didn’t have enough energy for emotion at that point,” Rouleau said. “There’s, like, this really just delusional serenity at that point where we’re like, ‘OK, well, I guess what we can do is just take the arm off and just have it drive.’”

The 20 best qualifying scores advanced to the semifinals. After a rule negated one of two qualifying runs, UF’s team found itself in a tie for 20th. Conrad Hellwege, the vice president of UF IEEE, and other Florida representatives went to lunch while Rouleau and Shi tried to catch up on sleep, convinced they would lose via tiebreaker.

Instead, while they enjoyed the local Moe’s Original BBQ, they received word that the conference decided to let every tied team advance. With minutes to return to the competition, they abandoned their Alabama-style pulled pork sandwiches and grabbed the robot from a sleeping Rouleau and Shi’s room.

The underdogs excelled in the penultimate round, as UF’s team shared fourth place to advance to the finals. Hellwege, a 20-year-old electrical engineering student, explained that an important stipulation in the rules assisted the magical run: teams who failed to reposition the beads correctly were penalized.

“Alabama’s robot actually knocked them (the beads) onto the course and then got their wheels stuck on him and couldn’t finish the track,” Hellwege said. “So many groups went for the beads and created problems for themselves in doing so.”

The little-robot-that-could navigated the course well enough to land UF on the podium, a third-place finish in wake of surrounding penalties.

Hellwege and Justin Schubeck, the UF IEEE president, won first place in SoutheastCon’s ethics competition. The duo constructed a presentation about the different ethical approaches of counterhacking, measures taken in response to hackers, or as Hellwege described it, the opportunity to hack back.

UF IEEE used to travel to nearly middle and high schools to talk to students about their work, but the last two years brought strict visitation policies with the rise of COVID-19. In wake of the limitations, different members of the chapter made themed presentations to share with teachers.

Hellwege used Arduino, an open-source software company that helps create interactive electronics, to build “the Star Wars jukebox,” which played the saga’s theme song, “The Imperial March” and “Cantina Band” on command. Fisher made a PowerPoint about building a computer, which he credits for pushing him toward his computer engineering major.

“It sounds very complicated,” Fisher said. “But I wanted to create a presentation to sort of demystify that process and potentially get middle and high schoolers to become more interested in it.”

Fisher, a native of St. Petersburg, Florida, said he and the other chapter members hope their presentations can inspire more students to pursue engineering.

Dr. Eric Schwartz, a master lecturer at UF and a long-time advisor for the university’s IEEE chapter, said getting middle and high schoolers to understand engineering is critical and praised the chapter’s passion and enthusiasm for involvement.

“Engineering is fun,” Schwartz said. “I don’t know an engineer in the real world that doesn’t actually like their job most of the time.”

Schwartz said the experience of building a project like “Bobert” is invaluable for students. His lab students build submarines and boats, a project he says provides the same experience as the first years of a professional job.

As far as Bobert is concerned, while Rouleau and Shi will both finish their undergraduate degrees this semester, the duo both intend to return with the university’s combined degree program. Rouleau has his sights set on next year’s competition.

“We really want to have it, not as it being a blind luck success or really an error in the competition success, but in that we have fully and certainly earned that position,” Rouleau said. “Ultimately, we want to win first next year.”

Ryan is a reporter for WUFT News who can be reached by calling 352-392-6397 or emailing news@wuft.org.
Previous Gainesville’s number of minority businesses ranks high nationally, a study suggests
Next Gainesville pedestrian crashes occur across the city, though prevention efforts have been largely limited to the area around UF