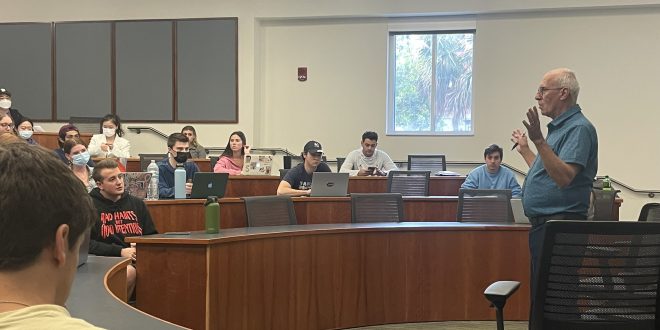 Robert Beland addresses students in a University of Florida classroom this semester. The class was preparing to give their final presentations for their marketing in hospitality and tourism graduate course. (Ashley Weinstein/WUFT News)

Robert Beland could not stand the way his statistics professor taught.

He knew that he could do a better job at connecting topics to students. So, Beland, 74, of Keystone Heights, became a professor.

He started substitute teaching at local elementary schools in his area due to teaching shortages across Florida during the pandemic.

Teaching shortages in grades K-12 have been prevalent since before the pandemic, according to north central Florida school administrators.

However, they say COVID-19 has increased issues for educators. This has led to more openings in the school districts. Although districts are implementing new programs to increase morale and longevity in the career, many job postings in north central Florida schools remain open.

In 2017, Putnam County School District was retaining 65% of teachers with zero to three years of experience, said Kristin Carroll, an instructional administrator in human resources. The district created a mentorship program to increase its retention of new teachers.

Carroll said retention rates rose to 93% by the 2019-20 school year, but the percentage has dropped to 85% since the pandemic.

She believes the pandemic has shifted people out of education, and many people changed career paths during or after 2020.

A survey by the American Association of Colleges for Teacher education found that teaching programs saw a significant drop in enrollment during the pandemic.  It also found that the average salary of a teacher nationally is only $61,000, which discourages new teachers.

Despite the success of the Putnam County mentorship program, there is still a shortage.

“We still have positions open. Even one open is too much. We continue to recruit,” Carroll said.

A franchise of a STEM education program for elementary students opened in Tampa in 2014. Bricks 4 Kidz teaches science, technology, engineering and math through Lego bricks.

John Fontana, who owns a franchise, said he has begun bringing the program into local elementary schools to help teachers make extra money, and the program’s existence is available to more students.

Fontana, 38, of Tampa, said there are over 1,000 kids in the program and around 30 teachers. He was able to convince principals to let him hire their teachers to help run the program.

Although programs like Bricks 4 Kidz can create higher pay for teachers, it is not solving the issue of teacher shortages across the state.

District spokesperson Jackie Johnson said COVID-19 has taken a toll on the district, but other issues have been in place prior to the pandemic.

Johnson said being in proximity to the University of Florida and its education college put Alachua County in a better situation than most. Johnson said there are recruiting efforts out of UF, but fewer people now want to become and remain teachers.

“We want to not just recruit but retain,” Johnson said.

Thomas said she always had trouble in grades K-12 because teachers do not accommodate creative thinkers. Teachers often focus on standardized testing and benchmarks, she said.

After her husband passed away when she was 32 years old, she decided to follow her passion of art education. Thomas is pursuing a Ph.D. at Florida State University in art education.

Thomas said she has 35 to 45 students in a classroom, which gives her around 30 seconds per student.

“This is not a functional way to educate a student,” she said.

Thomas said she could not financially survive off teaching without her husband’s Social Security death benefit. Her average take home pay is $3,500 a month, with average rent in St. Johns County approaching a third of that.

She said after finishing her Ph.D., she would like to start a micro school where standardization is not the priority.

“Teaching middle school is my calling,” she said, “The further into my research, the more clear it is we are not serving children well in the U.S.”

Listen below: Kimberly Thomas explains how she is ready to leave education after six years despite admitting teaching is her calling in life. Thomas shares her deeply rooted issues with grades K-12 education in the United States and why it is not serving her or her students. (Ashley Weinstein/WUFT News)

Ashley is a reporter for WUFT News who can be reached by calling 352-392-6397 or emailing news@wuft.org.
Previous Four Alachua County public schools are not meeting state class-size requirements
Next The Point, May 2, 2022: Felony charges follow UF students caught with fake IDs, but few result in convictions