But the UF sophomore, whose name is being withheld for privacy reasons, said she continues to suffer from panic attacks nearly six months after what happened to her that day. She said that going back to a classroom setting after being the target of an act of indecent exposure made her heart race and her palms get sweaty. She said she would will her mind not to take her back to Oct. 23, and the Reitz Union, where she was the victim of sexual violence.

“The effects of stress and anxiety and everything very much manifested physically,” she said. “I was just having trouble sitting in classes, having trouble paying attention, basically just being out in public. It was just something that was on my mind all the time.”

The man’s identity was unknown until March 11, when a University of Florida police detective identified Darnell Sylvester as a possible suspect, UFPD spokesperson Chad Holway wrote in an email. Sylvester, who was being held at the Alachua County Jail for failure to appear on a violation of probation for a DUI, denied any involvement in the indecent exposure incident. His whereabouts during the Reitz Union incident, according to the Alachua County Jail log, show him not in police custody. 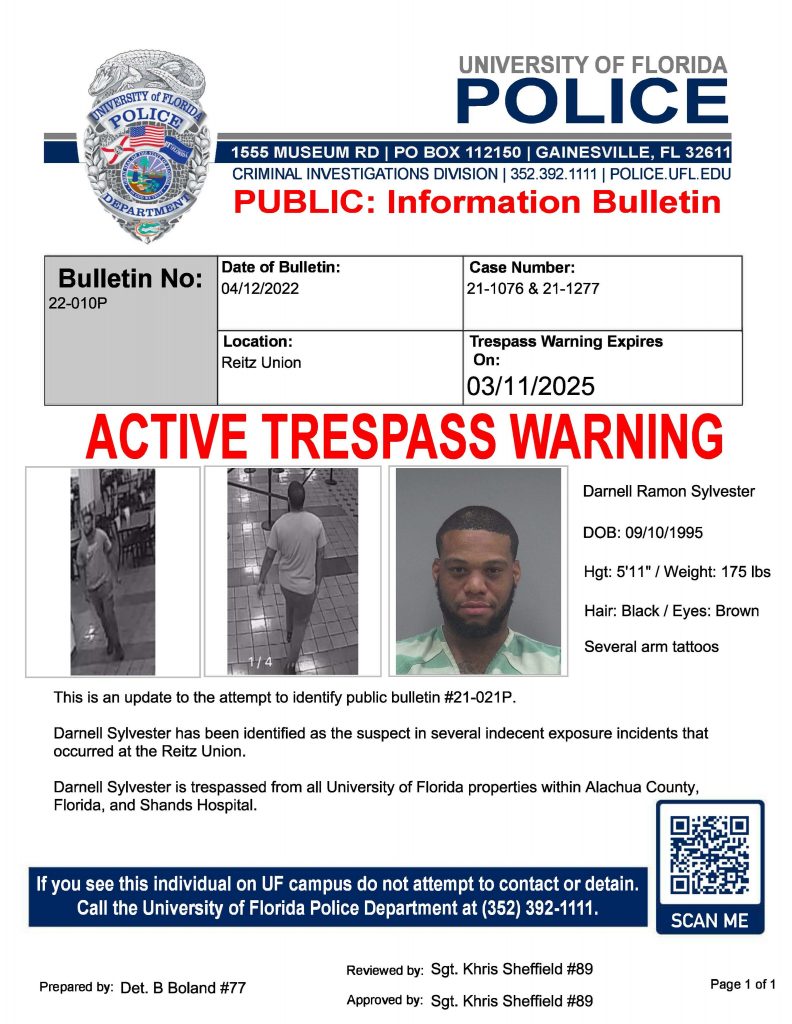 Following his identification, Sylvester, 26, was banned from campus, and on April 5 he was charged with exposure of sexual organs and indecent exposure.

Sylvester has a history of crime dating back to 2011. His charges since then include theft, marijuana possession, driving without a license and carrying a concealed weapon. In 2021, charges against him were dropped for inflicting bodily harm, domestic battery by strangulation and theft.

The investigation was always on the sophomore’s mind. The student said she was called in for a photo lineup March 14, which she said was intimidating.

She said she was lucky to have a support system that recognized this as a serious event and not something that should be written off because she wasn’t physically assaulted.

“I think I can be unkind to myself sometimes and be frustrated with how much everything affected me, but at the same time that I get frustrated with past me I’m also the most impressed by her,”  she said. “She handled everything really well, considering.”

Police say Sylvester has been linked to two incidents on campus with three known victims. The second incident took place on Dec. 4, 2021. A UFPD Timely Warning released around 4:03 p.m. on that day reported that a female saw a man expose his genitals on the ground level of the Reitz Union near the east common area.

“We encourage students to be alert of their surroundings,” Holway wrote. “If they see any suspicious activity or behavior, they should contact the police department immediately and/or as soon as it is safe to do so.”

The student who was the target of the Oct. 23 indecent exposure said her initial phone call to UFPD was dismissed. After her father called UFPD and was told his daughter never stated she wanted to open an investigation, the student immediately called back to say she did. She has since received an apology from UFPD for the miscommunication and the way the phone call was first handled.

“It’s almost been six months since this happened so I’m very appreciative of UFPD,” the student said. “I’m assuming it was not easy to find him and pull this whole case together just because of the lack of footage.”

The footage from Oct. 23 was grainy and in black and white, and showed the man walking in and one of him leaving. No additional cameras have been installed to the food court since the incident.

In February 2021, the Division of Student Life requested cameras be installed at the Reitz Union, UF spokesperson Cynthia Roldan wrote. The Capital Improvement Trust Fund Committee approved the request for $105,000, and in August UF’s student Government contributed an additional $45,000 for the cameras.

Roldan wrote that the university would be installing cameras in Spring 2022, back in November 2021. However, this month she wrote that “the process of installing the cameras is still underway.”

On March 11, the order for cameras was made, Roldan wrote. But because of the ongoing global supply chain disruption and product shortages the cameras have taken longer than normal to arrive.

“As a result, we cannot provide an estimated time of when the cameras will be installed at this time,” she wrote.

The student said she knows that cameras aren’t going to prevent this from happening again, but she said it will make it easier to catch suspects in the future. She also noted that no one is going to want to send their child to a school where this is happening all the time, and people are getting away with it.

In response to the cameras she said, “If it was a priority, it would be done.”

The victim wants to make clear that the most important thing for her is to have the state attorney’s office choose to prosecute and not drop charges.

Since the incident she has worked on recognizing her emotions as being valid and coming from a real place.

Thanks to counseling, she has been able to focus on her studies while being scared. She journals before she studys in a public space to process how she is feeling. Even so, she is graduating early as a result of the incident.

“There’s a part of me that is like it’s nice to not live in a reminder of this,” she said. “But the thing is as a woman you can be victimized anywhere. The reality of knowing that and knowing what that feels like, that’s never going to leave me.”

Isabella is a reporter for WUFT News who can be reached by calling 352-392-6397 or emailing news@wuft.org.
Previous The Point, April 28, 2022: UF fired its soccer coach after one season
Next Gainesville City Commission hopes residents come around to idea of new affordable apartment complex