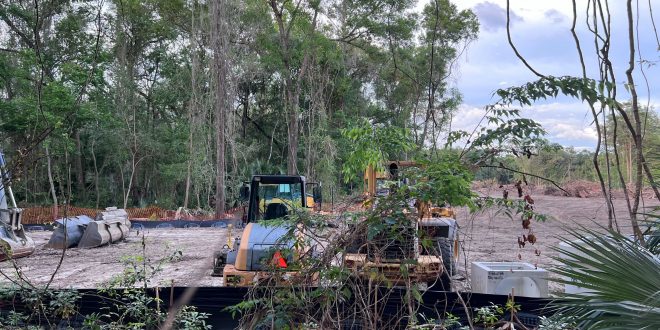 Construction has begun on the Royal Park Apartments. The developers are currently clearing trees to build the complex. (Kyle Bumpers/WUFT News)

Commissioner David Arreola said he recognizes residents’ complaints but wants them to come around to the idea and support the construction of the apartment complex.

“Adding new neighbors is good for the city,” Arreola said. “It creates more opportunity, and it makes people want to live here in Gainesville.”

The developers are currently clearing the area of trees to allow construction to start. Arreola said projects similar to this usually take around a year to complete.

At the workshop in February, Scott Zimmerman, a co-founder and manager with the Banyan Development Group, said it would take about 15 months to complete the project. He said the complex would contain 192 two-bedroom apartments with proposed rents of $900.

Residents of Hawthorne Reserve Condominiums voiced their concerns about the construction of the new development. The complex is adjacent to the current construction site, and the people there had worries.

One issue these residents have expressed is their concern for the environment. Leah Powers, a resident of Hawthorne Reserve Condominiums, said she was worried about the area’s nature. She said Gainesville is a beautiful town with lovely ecology.

“It is sad to see the nature being disrupted,” Powers said.

Kyle Collins, who owns a unit in the complex, said he was most concerned with drainage and flooding of rain water. He said the developers are building in a flood zone, which he believes could be an issue for future residents.

Arreola said he has heard these environmental complaints often but said studies had shown the area was safe. One portion of the land wasn’t safe, and the developer is not building on it.

Commissioner Harvey Ward supported this point, saying the codes and studies exist to make sure people aren’t building on sites that will destroy the environment. He mentioned drainage facilities and retention ponds as ways to counteract potential problems that arise.

“As long as the developers are meeting those preplanned requirements, they have a right to move forward,” Ward said.

Ward and Arreola said another challenge the city has faced is receiving backlash for the complex being built. Arreola pointed out that the project was by-right, so there was nothing the city could do to prevent construction as long as the developers were following the zoning standards.

He said the developer buys the land and has the right to construct, as long as it does not violate the regulations set in place.

“The city doesn’t manage construction, and that’s another misnomer that we have to clear,” Arreola said.

The commissioners also recognized the issue of traffic and transportation on Northwest 39th Road. At the February workshop, area residents said the light at Northwest 39th and Newberry Road takes too long to turn green, and traffic gets backed up.

Drivers cut through the gas station at the light and make a u-turn further down the road to avoid waiting at the light, Powers said. She added that she and her roommate have timed the light, which she said takes as much as 5 minutes to turn green.

She and other people who live on the street think the traffic will worsen with the arrival of almost 200 families.

Ward said that since Newberry Road is a state road, the city does not have control over it. He said the Florida Department of Transportation would be in charge of making any changes involving the road, so the city can not do anything without the state.

While changes to the light on this road is one concern residents have, they also would like to see changes at the opposite end of the street. Northwest 39th Road ends in a dead end.

“It would be really nice if they made an exit on Northwest 39th Road on the north side to Eighth street to help alleviate traffic,” Collins said.

Ward said he believes an exit would help traffic flow on the road. After February’s workshop, Ward stayed behind to talk to residents who had attended the meeting and said that was their main complaint.

He said since the road is a City of Gainesville street, traffic studies can be held if the neighborhood wants it. He said the state would not need to be involved in this change, so the city could operate on its own.

Arreola said he felt strongly about the state’s involvement in the issues involving the intersection of Northwest 39th Road and Newberry Road. FDOT chose not to attend the workshop in February, and he said the department has not been willing to work to fix the issue.

“The state has been a complete disappointment,” Arreola said. “They have not come to the table. They have shown no interest in having a discussion.”

Arreola also said some nearby residents have expressed discontentment with the expected new residents being from low-income backgrounds.

“It’s really painful to hear some of the things that I heard; people saying we don’t want low-income folks living near us,” Arreola said.

However, not everyone around the site feels the same way. Heather Sires, a resident of Hawthorne Reserve Condominiums, said she expects that the arrival of her new neighbors will help the area by keeping jobs and bringing in more entertainment and business.

“It’d be nice for new people to come into the area,” Sires said.

Arreola said he hopes the conversations switch from displeasure to finding positives in the situation.

The community has a need for more affordable housing with a spike in people moving into the city, especially in the past six years, Arreol said. The development is near the main arteries of the city, which can expose residents to job centers as well as amenities, such as the movie theater, restaurants and parks.

“The biggest challenge we’re facing right now is trying to fight the misinformation and fight the myths about what affordable housing really means for people,” Arreola said.

Kyle is a reporter for WUFT News who can be reached by calling 352-392-6397 or emailing news@wuft.org.
Previous Man who masturbated in front of UF student at Reitz Union is identified
Next The Point, April 29, 2022: Florida taxpayers aren’t on the hook for Disney’s debt, governor’s administration promises