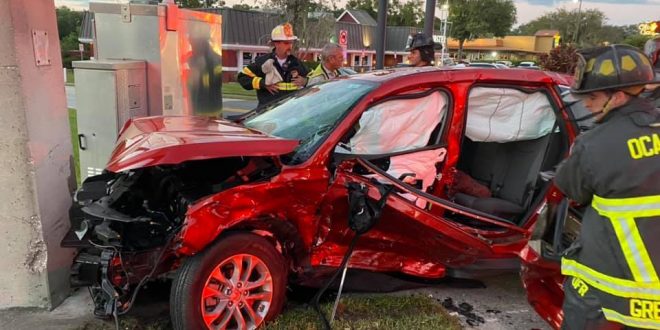 On Oct. 12, a three-vehicle accident occurred on State Road 200, as a red Hyundai departed the Red Lobster parking lot on the 3300 block. The crash resulted in the death of Munir Shrouf. (Photo courtesy of Ocala Police Department)

Ocala crash that resulted in one death progresses toward a trial

The speed limit was 45 mph. But on an October evening, police say two cars sped 97 mph side-by-side in a silver blur, swarming on the six-lane State Road 200 in Ocala.

According to video evidence, the Toyota Scion and Honda Civic were pacing one another around 7 p.m., whizzing past the other vehicles. Their race ended quickly when a Hyundai Santa Fe exited the 3393 SW College Road Red Lobster parking lot.

As Munir Shrouf crossed the lanes of traffic in his Hyundai to turn left, the westward-traveling Toyota struck Shrouf’s driver’s side. The Toyota revolved counter-clockwise. The Honda then hit the Toyota’s rear. Meanwhile, the Hyundai crashed into a light pole on the corner of Southwest 24th Avenue, police said.

The crash on Oct. 12 resulted in Shrouf’s death.

When Ocala police officer William Joedicke arrived at the highway, the red Hyundai had crumbled against the concrete pole. In a police report, Joedicke wrote that large debris was scattered throughout the street. Scratches and gouge marks led from the area of impact to the Hyundai.

Shrouf, 56, also of Ocala, drove with his wife Janet, who sat in the passenger seat, and his daughter Arige, who sat in the back seat. Both were transported to the hospital, as were Jones and Medina. Three people were trauma-alerted, according to the Ocala Police Department. Shrouf’s surviving kin did not respond to phone calls requesting an interview.

On Jan. 7, Ocala police received Florida Highway Safety records, and Joedicke served the search warrant on the Honda to upload the car’s event data recorder. The records revealed the Honda drove 97 mph one second before the collision. The Toyota traveled at roughly the same speed.

Three days later, police arrested Medina, the registered owner and driver of the Honda. He was charged with vehicular homicide, racing on a highway and reckless driving. Jones was arrested one day later and charged with the same crimes.

“If you’re not here on time, I’m going to put you in jail,” Judge Lisa Herndon said to defendants on Wednesday in the Marion County Courthouse. “Do you understand?”

Although scheduled for an arraignment, Medina and Jones were not present. Becky Fletcher, who works with misdemeanors in the Office of the State Attorney, said most people represented by an attorney do not attend the arraignment. Plea documents waive them from attending.

On Jan. 31, 15 days before the first scheduled arraignment, attorney Kali Stauss entered a plea of not guilty on Jones’ behalf. Stauss said this waives them from attending arraignment hearings until further stages of the case.

Medina waived the right to a public defender and hired Eric Evilsayer as his attorney. On Jan. 19, Medina pleaded not guilty and demanded a jury trial. Evilsayer and Medina declined an interview request.

When someone is charged with a felony offense, the state has 175 days to file the official charges, known as “information,” Stauss said. Under Florida’s speedy trial statute, the defendants are also entitled to be tried in that period.

“Once you’ve been charged by law enforcement, the next step is whether or not the state is going to be filing information against you,” Stauss said, “and they have not decided whether or not they’re going to do that yet, and that’s why it keeps going on.”

Five arraignment hearings have been scheduled since Feb. 15. Stauss said the state is looking over evidence and witness statements.

“It can take time when they’re making a decision, so right now we’re just waiting to see what the state is going to do.”

Katie is a reporter for WUFT News who can be reached by calling 352-392-6397 or emailing news@wuft.org.
Previous Florida soccer coach leaving after complaints by players over comments about eating habits, bodies
Next Federal appeals court wades into Ocala prayer vigil fight