UF Health Shands Hospital employees planted their 20th annual pinwheel garden this month to mark Child Abuse Prevention Month. A team of 23 employees and volunteers poked 1,000 blue and white spinning wheels into the grass in front of the hospital.

The pinwheel garden has remained in place throughout April.

These pinwheels are a part of Pinwheels for Prevention. This national campaign was designed by Prevent Child Abuse America in 2008 to increase awareness of child abuse prevention efforts.

“We wanted something to represent happy and healthy childhoods,” said Chris Lolley, the executive director of Prevent Child Abuse Florida. “The whimsical and carefree nature of the pinwheels does just that.”

Lolley said the organization wanted to focus more on promoting the cheerful side of childhoods rather than the negative aspect of child abuse.

University of Florida Health Shands Hospital partnered with the Alachua County Child Prevention Task Force and the Child’s Trust of Alachua County. They plan to hold a variety of awareness events throughout the month.

These events include the pinwheel garden, Celebrate the Child and a yearly proclamation of national child abuse prevention in both Gainesville and Alachua.

“These celebrations serve as a reminder to the public to keep the children of Alachua County safe,” said Cathy Winfrey, the chair of the Alachua County Child Prevention Task Force. “It’s more prevalent than we realize.”

Winfrey said mounting pressures and financial stress because of the coronavirus pandemic caused an increase in child abuse cases.

“Teachers and guidance counselors are our biggest reporting source,” Winfrey said. “With schools being closed, we lost the ability to monitor and help those children.”

Child abuse and neglect are defined by The Federal Child Abuse Prevention and Treatment Act as any recent act or failure by a parent or caretaker to cause serious physical or emotional harm or sexual abuse.

According to the Child Advocacy Center, over 4,000 cases of child abuse are reported every year in Alachua County.

Shelby Sapp is the program director at the center. She said the center works to provide a safe environment for children who have experienced abuse and neglect.

“We want to take care of kids,” Sapp said. “We don’t want to see any of them fall through the cracks.” 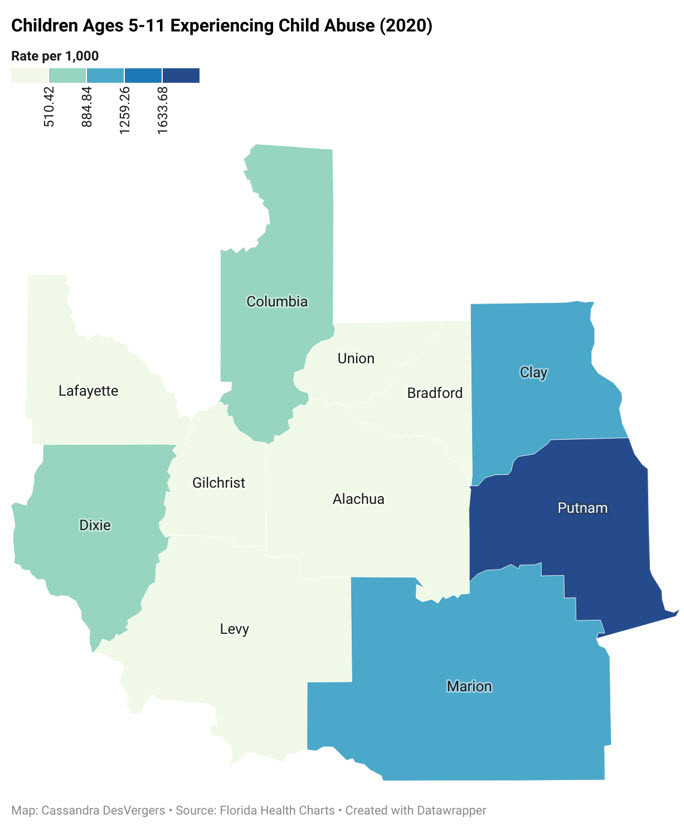 Cassandra is a reporter for WUFT News who can be reached by calling 352-392-6397 or emailing news@wuft.org.
Previous Bill adding Palatka to seaport council awaits Florida governor’s decision
Next Impact of juvenile fines and fees