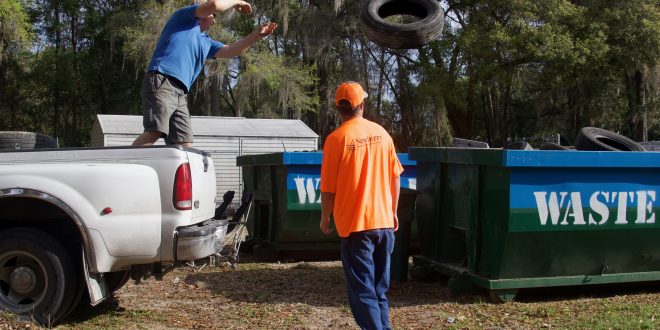 Newberry resident Phillip Russell (left) and Rhett Pearce, a city public works technician, threw tires into dumpsters at a recent waste collection event. Russell brought them from his backyard and off the side of local roads. “You see a tire on the road, you pick it up and get it out of the way,” he said. (Antonia LaRocca/WUFT News)

Robert Lingis still had about 10 paint cans to discard after having renovated rooms in his home in Newberry. They had been stored in his shed for about a year and a half.

So Lingis, 73, was more than happy to bring them to a recent waste collection event held jointly by the city and Alachua County.

The city and county are working together to build a residential recycling collection center, in Newberry, that’s ideally more accessible for people in the rural parts of the county. Lingis approves.

“It protects the environment and gives people a better chance to get there and get rid of … their toxic waste and stuff like that,” he said.

These sites accept many items like yard waste and certain household hazardous waste.

The new site would have the same hours of operation as the other centers and would replace the Alachua/High Springs Collection Center once the new one is constructed and opened, said Gus Olmos, the county’s director of solid waste and resource recovery.

The new center would be nearby a wastewater treatment plant off County Road 337, New said. Newberry would own the land, while the county would run the building and could eventually purchase the land from the city, he said. There would not be a fee to use the site, because the county pays through the solid waste assessment charge on tax bills, New said.

Newberry Mayor Jordan Marlowe said a new recycling center would decrease the time and gas it takes local residents to drive to the next closest center: about a half hour away.

Olmos said the facility would be meant for residents and not businesses, and may be divided into two buildings: One for collecting items like garbage, yard waste, recyclables and more; the other for materials like paint, computers, household chemicals, etc.

Newberry resident Lajuanna Jones, 68, said she favors having a new recycling center, as garbage pickup at her house does not accept some items she needs thrown away.

“It’s going to have to be outside city limits somewhere because, you know, that gets to be a pretty strong smell,” Jones said.

Marlowe said he knows some of his residents may view the facility as a dumpsite.

“I think Alachua County is aware of that,” the mayor said. Speaking of the building’s look, he added, “And they do a pretty good job of making them attractive and useful.”

Olmos said the county is considering having at least 4 to 5 acres for the site to help better protect residences from the smell and other related factors. While there are no designs or illustrations yet for the new one, he said it would be a similar size to the center it would replace.

The county had proposed putting a new center in High Springs until residents there objected, Olmos said.

Mike Gumpper, 53, a High Springs resident and Millersville University economics professor, said he was one of the people who reached out to the county about his concerns, including how it could have brought additional traffic to his area.

“Once we found out about it, the community came together very, very quickly – sort of rallied – to discuss this issue with the commissioners,” Gumpper said.

The new site would be near a wastewater treatment plant that’s compatible with its use, Olmos said.

“They are very difficult types of facilities to site,” he said.

The dates for presenting final plans to the Alachua County Commission and for when construction will begin have not yet been decided due to the partnership being in its early stages, Olmos said. The county is waiting for more details from the city on the size and cost of available land before it finalizes its budget for the project, he said.

Country Way resident Steven Alford, 35, said he supports the center because it could prevent hazardous materials from entering the landfill. Given high gas prices, Alford said, a closer recycling facility would be especially helpful for those with larger vehicles.

“I got a big truck,” he said. “I wouldn’t want it to be a facility where I couldn’t even turn my truck around.”

Newberry resident Tammy Snyder, 58, isn’t sure there is a need for the center, saying having to drive 20 minutes to the next closest facility shouldn’t be an issue. Additionally, Snyder said, she’s concerned about a burden on traffic with a center entering the city.

“Only having it open certain times of the day – whenever it’s less congested – would help,” she said. “I hope they would do a traffic study to take a look at those issues.”

New said the facility would not generate traffic congestion.

“If they could explain to me properly, where I would understand what their process is and how safe it is, then yeah, I might be OK with that,” Kallmeyer said.

New said the center would have employees on-site whenever open. They would direct traffic and regulate certain materials to ensure proper safety and disposal procedures, he said.

There would be around two to six staff members on-site depending on the finalized size and design of the facility, Olmos said.

Newberry resident Phillip Russell, 59, said he has collected many discarded tires at his home, around the area and on the side of roads.

“Newberry seems to be growing pretty quick,” Russell said. Referring to the proposed facility, he said, “Probably would be a good idea for them.”

New said it could prevent or at least reduce littering, trash burning and air pollution.

“The idea is that you’re much closer, you’re much more inclined to dispose of it properly, rather than just go down some dirt road and push it off in the ditch,” he said.

CountryWay Town Square resident Ken Johnson, 67, said he remembers when as a child he saw how some people would improperly dispose of their materials. These days, Johnson said, some people still don’t have the space to hold onto their waste.

“Anything they can do to help that out is a plus,” he said of the city-county partnership. “As long as they have it in a proper area.”

Antonia is a reporter for WUFT News who can be reached by calling 352- 392-6397 or emailing news@wuft.org.
Previous The Point, April 26, 2022: Alachua County purchased nearly 4,000 acres near the Putnam County line. Here’s what it plans to do with the land
Next Bill adding Palatka to seaport council awaits Florida governor’s decision