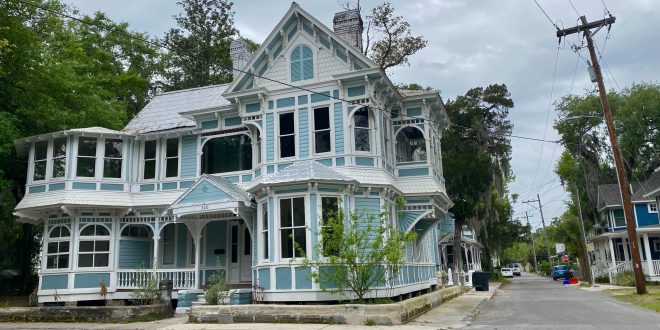 Homes in the Pleasant Street have a rich history. The area is known for being the first African American neighborhood in Gainesville to receive the state designation of a historic neighborhood. (Anna Harrell/WUFT News)

Pleasant Street neighborhood had until recently offered an affordable and intergenerational area of Gainesville for renters and homeowners alike.

Those who live there are now facing expensive housing and demolition.

“People are being priced out,” said Chelsea Bakaitis, the project manager for the city’s Gainesville Community Reinvestment Area, or GCRA.

“I’ve talked to people who can’t afford a house in the neighborhood they grew up in,” she said. “I think they feel sad about it because they can’t give their kids what they had, which was a really tight-knit community.”

Thomas Hawkins’ family has lived in the Pleasant Street neighborhood for four generations. His great-grandfather was born in a house two blocks away from Hawkins’ current home.

Hawkins said there were eight boarded-up houses on his block in 2006. Now, those houses are no longer boarded, and there has been a great amount of new private home construction. But along with the benefit of that renewed interest and investment, Hawkins is noticing the downside of prices in the neighborhood rising dramatically.

Because of these rent increases, GCRA has created housing programs and neighborhood projects to help protect and preserve Pleasant Street and its residents.

GCRA’s My Neighborhood Program, created in 2019, offers $25,000 to help people purchase a home. The program offers incentives to people to help cover the costs of moving back to a neighborhood in which they grew up.

“The housing prices are so high in Pleasant Street that people can’t take advantage of this program or get financing for those homes either,” Bakaitis said. “A lot of people want to move back, but they can’t even get lending.”

To address this issue, GCRA is planning the Infill Project. With the purchase of a vacant lot within the neighborhood, GCRA is hoping to build affordable housing.

Bakaitis is hosting a meeting in May that will allow the community to express their wants and needs regarding GCRA’s projects.

Pleasant Street has a rich history; it is known for being the first African American neighborhood to receive the state designation of a historic neighborhood. Many of the houses and buildings date back to 1880. Because they are so old, the houses need restoration, which is why Bakaitis is hoping the city commission approves GCRA’s Historic Home Stabilization Program.

“The point is to fix up historical homes that need it so that they don’t end up being neglected to the point where they have to be demolished,” Bakaitis said.

With the belief the historic district potential at risk in Pleasant Street, she hopes to get the city’s attention and the program approved before the end of April.

In the meantime, GCRA contractors will be pressure washing and painting homes as a part of the Paint Program. The goal is to maintain the value of the houses and beautify the neighborhood.

Bakaitis believes it is important to rehabilitate Pleasant Street houses in order to protect the intergenerational and cohesive community.

“It’s really healthy for children to grow up in neighborhoods like that where people are taking care of each other,” she said.

Bakaitis said when newer people move into the neighborhood, the commitment to taking care of your neighbors is often not yet well established.

“I’m not saying it can’t be, but it becomes more of a problem when people are pushed out, which is more just like gentrification,” she said.

When people are displaced, it can create a hostile feeling and a negative experience, Bakaitis said.

Like GCRA, the leaders of the Pleasant Street Neighborhood Association are trying to make improvements.

Dotty Faibisy, chairperson and secretary of the association, is currently trying to convince the city to reopen Northwest 2nd Street, which used to be a main entrance into the neighborhood. The city closed the street to provide outdoor restaurant seating when the spread of COVID-19 began.

“It’s really inconvenient people have to zigzag around to get into the neighborhood,” she said. “It’s an inconvenience for emergency vehicles, people on bicycles, and it doesn’t really look very attractive.”

Because Faibisy has lived in Pleasant Street for over 20 years, she wants the neighborhood to be accessible and affordable.

“It’s really important to protect our history,” she said.

Anna is a reporter for WUFT News who can be reached by calling 352-392-6397 or emailing news@wuft.org.
Previous Florida targets treatments for trans youth
Next The Point, April 21, 2022: How Gainesville’s Pleasant Street neighborhood is changing and what the city is doing about it