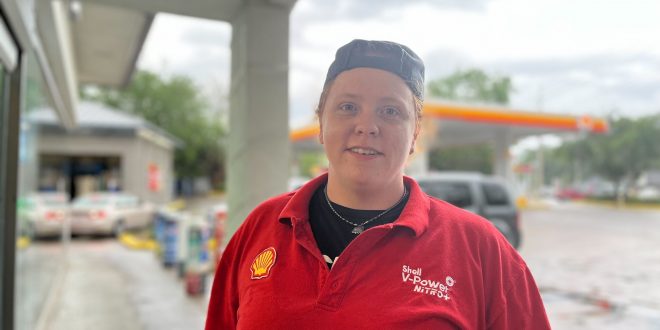 Andy Pinedo started his food truck business just as gas prices began to spike in January. Pinedo said he moved to Gainesville from Miami a year ago to save on time and money that was lost while he was frequently stuck in traffic.

Now Pinedo is paying $40 more than he was originally to fill his RAM 2500 tank.

“I have struggled with the decision of increasing the (food truck) prices,” he said. “Cuban food is supposed to be affordable, but we never know how much we would have to pay for the next tank, grocery shopping or our personal expenses.”

Gainesville residents are struggling to keep up with their expenses as global gasoline supply drops and demand remains unchanged.

The U.S Department of Labor reported in March that the consumer price index increased 1.2% across the board. The data show gasoline, shelter and food were the largest contributors to this swell. Of these sectors, gasoline alone experienced an 18.3% change between February and March, according to the Bureau of Labor Statistics report.

In the first week of April, the national average gas price totaled $4.153. In Gainesville, the average price for regular gas was $4.151.

While the increase from 2021 to 2022 is significant, he said it is not the biggest increase in oil prices the United States has experienced.  Historically, the factors behind U.S oil crises have been oil dependence, foreign policies or lack of oil production.

Gas prices in the 1970s were associated with conflicts in the Middle East and driven by strong global oil demand. An oil and energy crisis in the 1990s was caused by the Iraqi invasion of Kuwait. Today’s crisis is largely the result of the Russian invasion of Ukraine and, consequently, the sanctions on Russian companies.

“Oil is a very important input on inflation,” Wang said.

Wang said he believes that the gas crisis is internationally correlated with policies and sanctions.  He said he finds it hard to predict how long gas inflation will last given the current price.

“The government can control some oils, and they can release it from strategic reserves, and that would help some of the oil crisis,” Wang said.

On March 31, the Biden administration announced a two-prong strategy to flood the market with oil–an attempt to relieve the sticker shock at gas pumps being experienced across the country. The administration plans to release about 180 million barrels of oil by the end of the year from the Strategic Petroleum Reserve. One million barrels per day will serve as a bridge to greater supply in the months ahead.

The Biden administration has decided to take action after an increase of nearly $1 per gallon–something that Gainesville business owners and residents alike have felt trickle down into their neighborhoods.

LeeAnna Baumgartner, a cashier at Shell, said she receives complaints every day about the price of gasoline. Baumgartner even had a customer walk in and ask for a refund.

“My thought was, ‘Why don’t you realize it sooner?’” Baumgartner said.

When the prices go down, workers have seen people filling up gas cans.

Bautista moved from Bolivia to Gainesville a year ago with a monthly allowance of $700. A year later, her allowance has remained the same, but her expenses have increased. She’s now taken on a part-time job in addition to school to cover her expenses.

“I have to sacrifice my free time, not only to pay for my own transportation, but also for my groceries and part of the rent,” Bautista said.

Bautista said her parents are struggling to meet her needs; her biggest fear is having to move back to Bolivia if inflation worsens.

“It worries me that gas prices may continue to rise and that it becomes less accessible,” Bautista said.

President Biden announced plans to coordinate with allies and partners around the world to release 1 million barrels per day of crude oil from the nation’s strategic petroleum reserve for six months.

Mariana is a reporter for WUFT News who can be reached by calling 352-392-6397 or emailing news@wuft.org.
Previous North central Florida newspapers attempt to remedy Gilchrist County news desert
Next Culinary classes and catering are back in session at Eastside High School