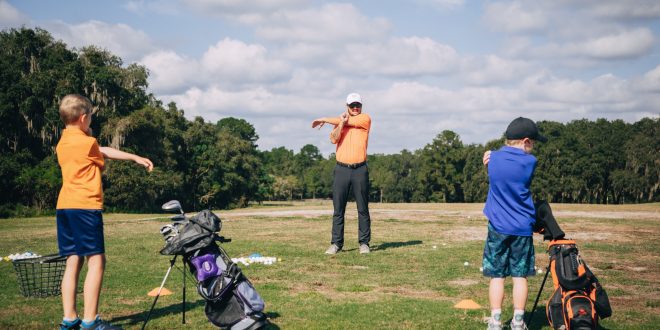 An instructor stretches with some young students. (Photo courtesy of the Gator Junior Golf Association)

Sean Warner was a master’s student at the University of Florida when he noticed Gainesville lacked a major youth golf presence.

After years of experience with The First Tee of Greater Ocala, the accounting student tried to bring a chapter of The First Tee to Gainesville. In 2017, the partnership dissolved after the distance between Ocala and Gainesville complicated involvement, he said. Warner’s budding youth golf organization risked evaporation.

“We almost didn’t survive,” Warner said. “I mean, it came pretty close, thinking we couldn’t keep doing this because of that transition. It was pretty brutal. There were some late nights.”

Despite some initial struggles, the Gator Junior Golf Association, or GJGA, has grown exponentially over the past four years.

John Stevens, a lead instructor with the GJGA who works at Turkey Creek Golf Club, remembers the infancy of the program.

“I think we had 25 kids signed up the first time we actually had the class,” Stevens said. “And 18 of them attended the whole semester.”

Warner, the founder and executive director of the GJGA, graduated in 2018 and left Gainesville for Atlanta. Then UF student Max Meier took over as the director of operations later that year. Meier also graduated and left the city in 2021, but the business boomed under his management; Warner said the program grew from roughly 80 or 90 kids to more than 200.

“What Max did from when I left, he took the program and he tripled it,” Warner said.

Now a middle-school teacher in Fort Myers, Florida, Meier used his relationships with golf professionals to expand the GJGA to other Gainesville courses, including Turkey Creek Golf Club and Mark Bostick Golf Course. He and Warner said public golf courses were essential to their mission of allowing every child the opportunity to pick up a golf club–regardless of his or her financial situation.

“We provided clubs for them. We let them take clubs home. I think trying to make a sport that has a stigma of being inaccessible and making that sport more accessible is one of the best parts about the program,” Meier said.

There’s a public golf course for every 31,683 people in the United States based on the January course count from MyGolfSpy. Alachua County, with a population north of 279,000 people, has two public golf courses — Turkey Creek and Ironwood Golf Course–that GJGA works with.

Eric Thomas, the GJGA’s head professional at Ironwood, echoed the sentiment regarding access to the sport. He said a private country club can drive kids toward sports like basketball, football or baseball, but they need to experience golf to understand the sport’s power. Public golf courses open paths for kids to spark an interest in the game just by hitting balls with their parents.

A former professional baseball player, Thomas began learning golf from his father when he was three years old. He credits the game for his integrity and enjoys passing the values of golf to the next generation.

Future golf students of Thomas need not look farther than 19-year-old Sloane Siebert for inspiration to master the sport. The Keystone Heights resident said she was practically raised on the golf course with her father, and she began working with Thomas when she was in fifth grade. Now plays on the golf team for Flagler College on a scholarship.

Siebert said Thomas was as much a mentor to her as he was a coach; she praised his positivity and encouragement. He was one of the first people she told when she received her scholarship.

“I can honestly confidently say that the reason I’m still playing golf is because I had somebody that made it exciting, made it fun,” Siebert said. “Someone like him [Thomas] who kept me wanting to come out and play more.”

Siebert was never a student within the GJGA, but she did participate in some camps Thomas hosted at Ironwood, both as a student and an adviser. She said she tried to emulate the positivity Thomas demonstrated to her and the other campers.

Even if his students don’t follow Siebert’s footsteps into college golf, Thomas believes the presence of a program like the GJGA sets a foundation for the future of the game.

“If you’re not trying to encourage young juniors or kids to play, then that’s when the sport starts to get a little thin,” Thomas said. “It kind of dies out because then you don’t have that future generation that will come back to Ironwood when they’re an adult to bring their kids out to play.”

Five years after the initial separation from The First Tee, Warner never thought the GJGA would reach its current scale of 200-plus students.

“I was expecting this to last the length of my college career, and I didn’t think we could keep it going,” Warner said. “I didn’t even know what to name our program…I’m just grateful to still have that opportunity.”

Six years ago, Warner recognized an absence in Gainesville’s junior golf presence. Today, he’s confident that the gap has been filled.