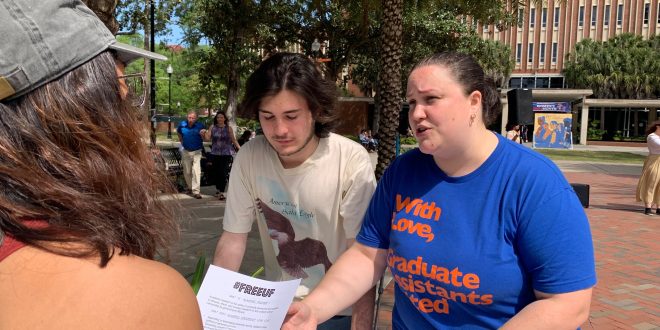 Rachel Hartnett, right, co-president of Graduate Assistants United at UF, and Allen Frasheri, president of the Young Democratic Socialists of America chapter at UF, tell a passerby about the academic freedom teach-in. Both Hartnett and Frasheri are concerned about the values of their degrees if UF continues to disregard academic freedom. (Meghan McGlone/WUFT News)

“What are we going to do about it,” Ortiz asked back.

Dozens of professors and students gathered on Wednesday for a teach-in on UF’s campus to organize in support of academic freedom. Ortiz, a UF history professor and president of The United Faculty of Florida at the University of Florida, UF’s bargaining union, was one of 10 guest speakers at the event.

UF spokesperson Hessy Fernandez declined to comment on UF’s progress on academic freedom because of the active litigation.

There have been plenty of other academic freedom issues at UF, Ortiz said. UFF-UF has filed a higher number of grievances on the topic in the past two years. One UF education professor filed a grievance after UF’s administration kept him from teaching a class entitled “Critical Study of Race, Ethnicity, and Culture in Education” because the words “critical” and “race” couldn’t be used together.

The fight to maintain UF’s academic freedom can’t go away, else it will be lost, Ortiz said. He supports standing with professors who may have uncomfortable or controversial ideas. Jeffrey Goldhagen, a professor at UF Health in Jacksonville, is one example, Ortiz said. UF denied Goldhagen from testifying in court three times on the subject of children and masking.

“So the way to defend academic freedom is to stop right there and say ‘Hey, instead of stopping people from talking about things, let’s encourage them to talk about things,’” Ortiz said.

Rachel Hartnett, co-president of Graduate Assistants United at UF, helped pass out flyers about academic freedom and censorship during the event, including a petition asking UF administration members to cooperate with investigations and uphold academic freedom.

As of Wednesday, the petition is shy of 150 signatures.

Hartnett is concerned about how UF’s recent behavior will reflect on her degree, she said. She also worries about UF’s accreditation being investigated by The Southern Association of Colleges and Schools Commission on Colleges.

“I go on the job market next year,” Hartnett said. “It no longer just says University of Florida is the place for my degree. There’s an asterisk that comes with it because of national and international news.”

Mark Hostetler, a UF professor in the department of wildlife ecology and conservation, was one of the speakers at the teach-in. He’s faced backlash for research in the sciences on monoculture turfgrass, which can lead to manatee deaths because it reduces water quality.

In his speech, Hostetler said academic freedom directly impacts the public good. Scientists need to be able to discuss problems and solutions to help the environment and people’s health.

“If scientists can’t research and speak the truth, then it affects everything,” Hostetler said.

Students are essential to the fight for academic freedom, Hostetler said. With 50,000 students and about 2,000 professors, students can make a big difference, he said.

Ashley Sanguino, 18, is one student who’s joined the cause. She’s part of the #FreeUF Coalition, which helped organize the teach-in. The coalition comprises students, professors, faculty and any other people who are concerned about academic freedom at the university.

“We’re just trying to get people involved in the coalition and build up our people power because that’s really what we have at the end of the day,” Sanguino said.

Allen Frasheri, 18, is one of the lead student organizers of the coalition. Academic freedom affects students as much as it does professors, he said, because it can prevent certain classes from being offered.

However, many students don’t know that their academic freedom and the value of their degrees are being attacked, Frasheri said. He hopes the teach-in helps spread awareness.

“We want to take classes,” Frasheri said. “We’re here to pay for these classes.”