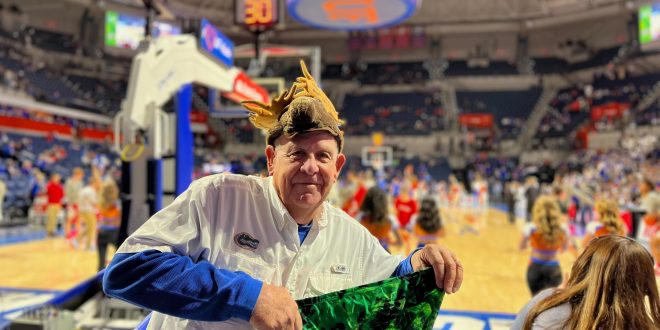 Ron Davis poses with his swim trunks before a Gators home game against Mississippi State on Jan. 19. (Photo courtesy of Rachel Wiles)

A man in a quiet Florida Gators polo and jeans sat stoically. Air Jordan sneakers squeaked on the hardwood in the background. Midway through the first half, the whistle blew. As a Mississippi State player began his free throw routine, the calm man — Ron Davis, 80, — started his.

The Newberry resident frowned at the foul call, stood, plopped his trademark moose hat on his head and waved his green swim trunks in the air, gripping both ends as if they were a string of floss.

The player shot his first free throw. He missed. And Davis got what he was after.

Davis first attended a Gators basketball game with his swim trunks 34 years ago. An avid swimmer, he navigated the arena’s wooden bleachers, his bag in tow, and parked himself behind the basket. When the referees sent an opposing player to the free-throw line, Davis reached into his bag for his swimsuit. On a whim, he waved it at the shooter.

After the visiting team missed four free throws in a row, Davis decided to continue his routine. Decades later, he and his green swim trunks are still stealing the show.

This season, when the Gators hosted LSU, fans near him laughed at his antics. Children pointed at and imitated the Newberry man, smiling wide at a tradition that began before the players on the court were even born.

The reactions are not limited to visitors. People who sit near Davis during home games find themselves amused, too.

James Teasley, 64, a Gainesville resident, has been attending Gators home games for decades. Today, he sits behind Davis in section 19.

“He does a good job,” Teasley said. “He’s got different techniques. He tries to go around in circles sometimes. Sometimes he kind of goes back and forth. He’s always pretty happy when they miss.”

When visiting players miss a free throw, Davis channels Tiger Woods with a strong fist pump. Other times, he relishes his victory by waving his swim trunks and putting them away like a knight sheathing his sword.

With more than 10,000 fans packing the O’Connell Center on game days, Davis attracts eyes from around the city, the state, the country and sometimes, the world.

When the Gators hosted Mississippi State this season, Matt Priedl, 24, and Jamie Davies, 20, sat together in section 19. The exchange students observed his ongoing antics as the game unfolded.

“It’s amazing,” Preidl said. “It doesn’t matter if the Gators win or lose. He’ll be there, and he’s gonna be waving the Speedo. It’s the only constant in the Gator basketball game.”

Davies views the Newberry man as a legend.

“I’ll buy them off him,” he quipped. “I’ll buy the Speedos. He should put them on eBay. They’ll go for millions, I tell you that.”

The Gators’ hire of former San Francisco Dons head coach Todd Golden means Davis, who started attending games in 1959, will see his 10th next season. As a student at UF, Davis roomed with former Gators fullback “Honest” Jon MacBeth. In 1960, Macbeth turned down thousands and refused to shave points in that season’s Florida State game. He then collaborated with head coach Ray Graves and local police to bait the bribers in a sting operation.

Davis, who was a swim coach at Gainesville and Buchholz High schools, said he still swims but does not wear swimsuits like the one he brings to games.

He rarely misses a game, and he does not leave early either. He enjoys seeing players improve during their time as Gators. When NBA Defensive Player of the Year Joakim Noah arrived in Gainesville as a freshman, he thought Noah was a girl because of the center’s long hair.

“A lot of people think that score is the most important thing,” he said. “It’s seeing those kids do things. That’s why I like to stay at the end of the game when the subs get in. What can they do? Give them a chance.”

As far as his free throw routine goes, Davis is happy to help the Gators in any way he can.

“I don’t know if I caused it or if they’re just bad shooters,” he said. “But I’ll take credit for it. That’s one more point that they didn’t score.”

Shawn is a reporter for WUFT News who can be reached by calling 352-392-6397 or emailing news@wuft.org.
Previous Man accused of killing UF student in a hit-and-run expected to change plea Monday
Next Olympian Brittany Bowe returns to Ocala alma mater

The county commission asked questions on Tuesday without indicating which direction it would go in approving, modifying or rejecting the proposal.