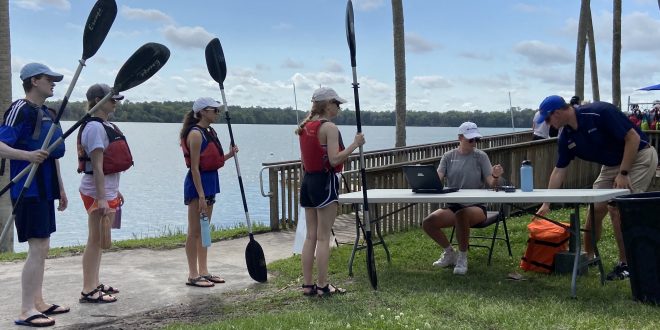 Neither tornado nor pandemic could stop Lake Wauburg’s centennial celebration.

September will mark 100 years since the University of Florida gained ownership of the lake’s North Shore, an outdoor recreation center and community staple eight miles south of campus.

Plans to celebrate the anniversary, in the works since 2018, were nearly thwarted by a tornado in 2019 and the COVID-19 pandemic, and yet hundreds of people gathered on Saturday for Music at the Lake, kicking off months of centennial festivities.

Preparation wasn’t a breeze. The tornado destroyed about $300,000 worth of property and equipment, said Amber Larkin, associate director for outdoor recreation at UF RecSports.

While some structures are still being rebuilt, Larkin said the site has mostly recovered. Two years of COVID-19 restrictions, though, left Larkin and other members of the lake’s centennial committee uncertain if the celebration could come to fruition.

Larkin spearheaded the planning – three similar events are set for April 16, July 4 and Labor Day – and said she was elated to see the first be a success.

“I just love that people can come out here, and they can disconnect from all of their responsibilities, and then reconnect with themselves,” she said of the lake’s enduring value.

Lake Wauburg was named – though for some reason misspelled – in honor of Frederick Warburg, a German-Jewish banker who immigrated from Europe to America in 1821 to help recruit settlers for Jewish agricultural properties in Alachua County, said Kaitlyn Hof-Mahoney, executive director of the Matheson History Museum.

“This is something that is a huge part of Gainesville and Alachua County life,” Hof-Mahoney said of the lake.

Music at the Lake’s turnout suggested as much. For three hours, attendees sailed, hammocked, barbecued, played sports and did yoga to the hum of a live jazz band.

John Bishop, 57, an architect and outdoorsman from Apollo Beach, said he enjoyed the event and loved the lake.

“The weather’s good, the music’s good and everyone’s having a good time,” said Bishop, who attended with his wife and daughter.

Lake Wauburg is where Linda Dillon, 22, learned to rock climb and indulge in kayaking and paddle boarding. She said the lake’s distance from UF’s campus and free student access make it a both a great stress outlet as well as way to enjoy the outdoors.

Dillon attended Music at the Lake with the UF Culinary Arts Student Union (CASU). The club’s vice president, she said around 50 of its members and 30 guests were to attend a planned picnic. Rather than “cook up a hog,” CASU brought 11 pounds of Korean barbecue ribs, 20 pounds of barbecue chicken kabobs, sausages and sides for the centennial.

“It’s definitely a positive experience no matter what,” she said of the lake.

Chloe Piloto, 20, a staff outdoor recreation associate and a climbing wall operator, said she feels fulfilled by helping other people engage in the activities she adores. Piloto said she spent Music at the Lake doing just that, welcoming visitors at the North Shore’s front gate.

“It’s just a fun atmosphere, both for the patron and for us,” she said.

Piloto began working at Lake Wauburg six months ago. She assists with aquatic activities like kayaking, canoeing and land sports like volleyball at the North Shore, as well as mountain biking, disc golf and rock-climbing procedures at the South Shore.

But her favorite part of the job is interacting with students. She remembers visiting the lake as a freshman and wants to create the best experiences for others.

“Not every university has a place like the lake,” she said.

Ron Perry, 66, an assistant law librarian at UF, was on his way home from a 5K in Micanopy and decided to stop by the lake. Perry hadn’t been in several years and wasn’t aware of the celebration before arriving. He said the jazz band was a pleasant surprise.

“It’s just a nice day away from the city,” Perry said.

Larkin said she’s proud of her staff for being able to put on an event like Music at the Lake despite the recent obstacles. She said they hope it brings more attention to Lake Wauburg.

“We want people to know about it and come out here and enjoy it,” Larkin said.

AJ is a reporter for WUFT News who can be reached by calling 352-392-6397 or emailing news@wuft.org.
Previous Gainesville commissioners vote to end call-in comment system that cost over $100,000 annually
Next The Point, March 21, 2022: A Hawthorne man is trying to boost the city through youth sports