The Thesaurus has no synonyms for the phrase, “confirmation hearing.” That’s because it’s a unique beast. Unique because it is like no other. And beast because when it comes to a Supreme Court nomination, it is treacherous for the nominee, while offering enormous opportunities for her questioners.

Keep that in mind as the Senate Judiciary Committee holds hearings this week on the nomination of Judge Ketanji Brown Jackson to the U.S. Supreme Court. If confirmed, she would be the first Black woman to serve on the nation’s highest court, and she would be one of four women on the court, the largest number ever to serve at one time.

Judge Jackson’s lengthy and diverse background as a lawyer and judge seems to have defused any notion that she is not qualified. And so far, Republican leaders have taken only indirect swipes at her.

“We’re in the middle of a violent crime wave including soaring rates of homicides, and car-jackings,” Senate Republican leader Mitch McConnell opined last week, adding, “Amid all this, the soft on crime brigade is squarely in Judge Jackson’s corner.”

Note that he didn’t actually say anything about Jackson herself. That may be because Republicans know the optics of personally attacking a Black woman are less than ideal. Not to mention that Jackson comes from a family of law enforcement officers and has the endorsement of the Fraternal Order of Police.

Then too, Republicans know there is already a conservative super-majority on the court, and even if Jackson is a liberal, it won’t change the balance of power on the court, as she has been nominated to fill the seat of the liberal justice she once clerked for, Stephen Breyer, who is retiring.

Nonetheless at this week’s hearings, Jackson will have her critics. Plenty of them. Among other things, they will focus on her record on the bench—eight years as a trial judge, and eight months on the U.S. Court of Appeals for the District of Columbia.

Republican Sen. Josh Hawley, R-Mo., got a head start last week, posting a series of tweets alleging that Jackson has “an alarming pattern” of sentencing child pornography offenders to prison terms that are below those recommended by the sentencing guidelines.

The White House adamantly disputed Hawley’s claim. “The facts are that in the vast majority of cases involving child sex crimes, broadly, the sentences Judge Jackson imposed were consistent with or above what the government or [the] U.S. probation office recommended,” said White House Press Secretary Jen Psaki on Friday.

According to the U.S. Sentencing Commission, on which Jackson served, there is wide agreement among prosecutors, defense attorneys, probation officers, and judges that the sentencing guidelines, set by Congress nearly two decades ago for child pornography, have become outdated with the rise of the internet. Consequently, less than a third of offenders convicted of possessing child pornography are sentenced within the guidelines.

Among the Republicans expected to be most hostile in their questioning this week are Hawley, Tom Cotton of Arkansas, and Ted Cruz of Texas. It’s no accident that all three harbor presidential ambitions. For them, these hearings are their time to strut their stuff, much as some of the Democrats did in questioning Donald Trump’s three Supreme Court nominees. This time, though, the Democrats will be playing defense.

“Often these hearings become sort of kabuki theater,” observes NYU law professor Melissa Murray, “The senators get to play out various soundbites that are later repurposed and repackaged” for a larger audience.

Still, the Senate does have the constitutional authority, and duty, to advise and consent to Supreme Court nominations. In modern times, that means trying to find out what a nominee’s views are and, sometimes, to discredit her.

If past is prologue, that could be a challenge. The Trump and Obama Supreme Court nominees were well schooled in saying as little as possible, and Judge Jackson is no newbie to this dance. This is her fourth confirmation hearing, although this one is definitely in a different league.

“I’ve been very surprised at what I consider to be her evasiveness in terms of talking about whether she has a judicial philosophy,” says John Malcolm, vice president of the conservative Heritage Foundation’s Institute for Constitutional Government. He points to Jackson’s testimony last June when she was nominated to the D.C. Court of Appeals.

“She said that she doesn’t have a judicial philosophy per se. I find that very surprising for somebody who went to Harvard Law school, clerked for three federal judges, including a justice, and ha[d] been a sitting judge at the time for eight years,” Malcolm said.

But conservative libertarian Erik Jaffe, policy director of a First Amendment advocacy group, counters that Judge Jackson’s record isn’t much help because the job of a district court judge is to follow precedent. “How can you tell what a judge or justice will do once given a certain measure of discretion based upon what they did when they didn’t have discretion?” he asks. “The answer is, you really can’t.”

There are, of course, some noteworthy Jackson decisions. Most prominent was a decision ordering President Trump’s former White House Counsel, Don McGahn, to appear before the House Judiciary Committee to testify in its investigation of alleged Russian interference in the 2016 Elections.

“Presidents are not kings,” she wrote. “That means that they do not have subjects bound by loyalty or blood, whose destiny they are entitled to control.” Ultimately McGahn did testify after the Justice Department, by then under the control of the Biden Administration, reached an agreement with the committee.

In another case, Jackson ruled that the use of the F-word at a protest rally was not grounds for arrest, but as in so many of her cases, the decision turned on a different, more technical, issue.

The fact is that the bread and butter of the federal courts in Washington, D.C., is administrative law. Does an agency have authority to pass this set of regulations? Did it follow proper procedure? Are its reasons for regulating this way properly justified? And most of these cases do not involve big public controversies.

Because of that, there is a way in which Jackson “has been genetically engineered for this moment,” says professor Murray. “She has been on two courts that deal primarily with the sort of arcane administrative law issues that don’t touch on hot-button questions that could be fodder in a confirmation hearing.” Indeed, adds Murray, Jackson’s docket has been “super boring.”

So don’t be surprised if senators also focus on Jackson’s career before she became a judge—her years as vice chair of the U.S. Sentencing Commission and the clients she represented as a public defender and in private practice.

During her confirmation hearing for the court of appeals last April, Sen. Cruz questioned her about a brief that she wrote on behalf of a group of retired judges in a case involving detainees then held in Guantanamo Bay. The judges wanted to file a brief arguing that evidence obtained by torture should not be admissible in the prisoner’s subsequent trial.

Cruz noted that this was a pro bono case and suggested that lawyers rarely work for free unless the client’s position reflects their own views. Jackson, however, emphasized that the case was assigned to her by her employer, a large law firm. “But did you agree with the position you were advocating?” Cruz followed up. Again Jackson deflected. “I didn’t have a personal view really…other than just to make sure that I was making the most convincing argument that I could make on behalf of my clients,” she said.

Monday will be Jackson’s easiest on the witness stand. All she has to do is read an opening statement after the senators—22 of them—make their opening remarks. But Tuesday and Wednesday will be grueling. If the senators all use up their allotted time, she will be answering questions for more than 18 hours—a marathon.

The one saving grace for every nominee is that senators love to talk and the more they do, the less time there is for the nominee to answer. Proving that silence, in a confirmation hearing, truly is golden.

National Public Radio is based in Washington D.C.
Previous The Point, March 21, 2022: A Hawthorne man is trying to boost the city through youth sports
Next The Point, March 22, 2022: Another teacher pay increase is coming in Florida 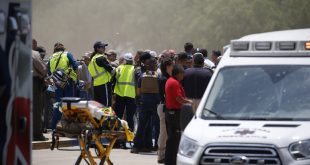 The U.S Department of Labor released data that shows how the gasoline index rose sharply in February, increasing 6.6 % after falling 0.8 % in January.