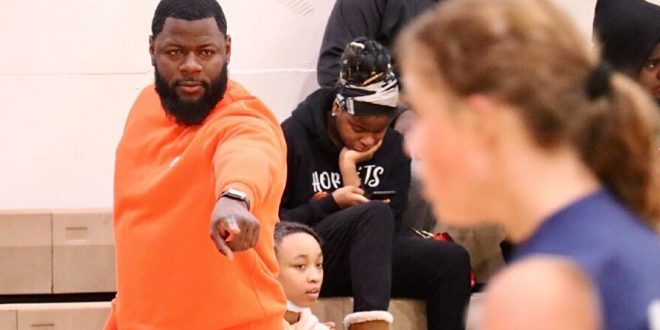 Cornelius Ingram coaches the Hawthorne Middle School girls’ basketball team at practice. He returned to Hawthorne in 2014 as the head football coach, tasked with providing a spark to a school on the brink of closure. (Brandon Carroll/WUFT News)

Cornelius Ingram, with a basketball to his hip, casts a towering shadow as he stands at midcourt of the Hawthorne High School Gym.

He instructs his players to run up and down the dimly lit court. An aura of anticipation fills the gym as the girls prepare for the district championship game.

The team eventually lost to Williston on the road 46-32. But Ingram’s legacy as a coach expands beyond wins alone.  He has helped revive the school’s athletic program — and his hometown of Hawthorne — since becoming head football coach in 2014 and girls basketball coach in 2016.

His football team has evolved from a group that won just three games in three years to a perennial playoff contender. His girl’s basketball squad has elevated from a middle-of-the-pack team to a powerhouse program that consistently reigns atop the district standings.

However, Ingram’s impact also stretches into the academic, social and economic fabric of the small town where he grew up.

“When my kids get around me, they don’t want to go home,” he said. “They love and respect me because they know I really care. If any of my kids are participating in any other after-school activity, I show up. I want them to know that I really do care.”

Hawthorne, a town of less than 1,500 residents, stretches 7.4 square miles and contains a lone elementary school and a combined middle-and-high school. About one in four of the town’s residents are impoverished, more than double the national average.

In late 2011, the Georgia-Pacific Manufacturing company in town closed, eliminating nearly 400 jobs. Hawthorne became a place travelers drive through when seeking the destinations of Ocala, Orlando or Jacksonville, said Dan Ferguson, Hawthorne High School’s principal. The town presents almost no opportunity for outsiders to stop by.

Despite the issues, Ingram made his way back to the community.

He returned to the school as a volunteer coach following a four-year stint as a collegiate and NFL player. The athlete transitioned from quarterback to tight end in college, contributed to two National Championships with the Florida Gators and was drafted by the Philadelphia Eagles in 2009. He tore his ACL in his rookie training camp, derailing his NFL career before ever recording a snap.

Thrust into a leadership role sooner than he imagined, he was immediately confronted with turmoil: The town’s only high school was on the brink of closure due to poor grades and test scores. The possibility of a shutdown, which could further cripple the community, led to angst. Concerned parents, school board members and city council representatives didn’t know what to do.

“Seeing the school I graduated from be in a bad place, I knew I wanted to help out,” he said.

So, the school looked to Ingram — and the athletic program — to spark an academic turnaround, said Cedderick Daniels, baseball head coach and an assistant football coach. The school had one year to turn things around.

Still adjusting to his role as a head coach, Ingram ran with the challenge, hoping to rejuvenate the school system.

“He brought the passion and desire they needed back to the school,” Daniels said.

And he turned the tide — even with a limited window and scarce resources. His first football team was composed of 17 players who had won just three games in three years, said Davonte Bowie, who played varsity football for the school from 2014 to 2019.

“Coming in, he wasn’t just a coach,” Bowie said. “He had an open door policy. If guys needed something, they could go knock, and he’d be there for them. He always told us we can come to him with anything. That made people want to play hard for him.”

The Hawthorne sideline is now crowded with guests due to Ingram’s policy of allowing former players to return free of charge. He aims to build lasting relationships that span beyond his players’ high school career.

Ingram’s mentality made its way into the classroom as he relied on his natural ability to resonate with teenagers. He equipped them with skills needed to succeed beyond the Friday night lights.

“Sports teaches you how to deal with life,” Daniels said. “You can’t walk off from your job or be late to your job, just like you can’t be late to practice or miss practice. You can’t come around and give half effort and expect to get anything. [Ingram] holds everybody to a higher standard.”

The uptick in Hawthorne’s athletic success hasn’t just given residents a morale boost. Alumni feel it, too.

So much so that Dustin Adkin returned to the halls of Hawthorne High School five years ago. Ingram’s former high school teammate became the school’s athletic director and defensive coordinator.

“Honestly, he’s the only reason I really came back here,” Adkins said. “He asked me to come help change the culture.”

Ingram, looking for more opportunities to enhance the athletic program, expanded his role in 2016 when he took over as the Hawthorne girls’ basketball coach. As one of the few Gators to suit up and start in both football and basketball, Ingram tapped back into his roots on the court.

“He’s like a father figure to me,” said Jazlyn Jackson, a junior standout. “He’s an excellent coach and an excellent father.”

The charisma he exudes has touched the hearts of his players and the community. As a result, home football and basketball games are so crowded that fans are forced to stand. The “Cornelius effect,” as Hawthorne Mayor Jacquelyn Randall says, has become something people want to experience.

“I cannot recall the last time I’ve been in an empty gym or football stadium,” Randall said. “He brings about togetherness in the community.”

In the process, he has helped attract a stream of new customers to the family-owned shops and restaurants in the town, further aiding the city’s economy.

“It was pretty much a desert valley of dry bones before he arrived back in town,” Ferguson said. “With the help of Coach Ingram, the excitement that he created with football brought thousands of people to this community. They needed a place to eat, a place to gas up and a place to enjoy the before and after of the game.”

Ingram believes his homecoming was part of his destiny — an opportunity to uplift a struggling community.

His success has prompted an influx of coaching offers across the country. He has received proposals that have included cars and homes at both the high school and collegiate level.

But when Ingram ponders the possibility of leaving Hawthorne, he often asks himself: “Will my impact be the same at this place?”

Brandon is a reporter for WUFT News who can be reached by calling 352-392-6397 or emailing news@wuft.org.
Previous The Point, March 18, 2022: Following passage of record Florida budget, governor suggests vetoes are ahead
Next GPD’s One Community initiative continues under new police chief