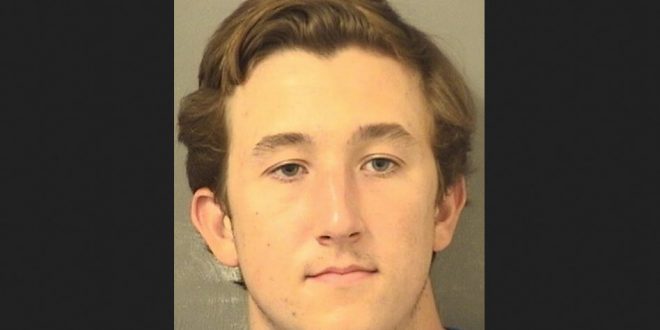 Michael Nanosky Jr., 20, of Boca Raton, pleaded guilty to a lesser felony, aggravated assault. Circuit Judge James Colaw sentenced him to five years of probation, ordered him to drop out of UF and stay out of Gainesville. (Palm Beach County Sheriff's Office)

A former philanthropy chairman for the Theta Chi fraternity arrested last year in a sexual assault avoided jail time and agreed to withdraw from the University of Florida under a plea deal with state prosecutors Thursday.

Michael Nanosky Jr., 20, of Boca Raton, pleaded guilty to a lesser felony, aggravated assault. Circuit Judge James Colaw sentenced him to five years of probation, ordered him to drop out of UF and stay out of Gainesville. He also forbade him from contacting the victim, her family and her sorority, and ordered him to pay for his victim’s therapy, attend mandatory counseling twice a month and complete 750 hours of community service.

The judge also prohibited Nanosky from joining any fraternities at any other university. The judge said the plea deal seemed beneficial to Nanosky, and wished him luck but cautioned him not to violate the conditions of the deal.

Nanosky was expelled from Theta Chi in January, according to Thomas Wildermuth, the president of UF’s chapter.

The victim, who declined to discuss the assault, reported the March 2021 attack to Gainesville police in June. Nanosky was arrested a week later by Palm Beach County sheriff’s deputies. He was released the same day after posting a $250,000 bond set by the judge.

The victim said the assault happened after a Greek function at a popular bar, Downtown Fats. The woman told police she accepted an odd-tasting drink from Nanosky. She reported blacking out until regaining consciousness while he was assaulting her.

She told police she blacked out again, and her next recollection was waking up in her dorm room early the next morning. She reported having a panic attack after piecing together details from that night.

The woman, who did not attend the sentencing, agreed to the conditions of the deal, according to a statement she provided to the court.

Nanosky and his lawyer, Huntley Johnson of Gainesville, declined a request for comment after the hearing. Johnson is known for specializing in criminal, Title IX and student misconduct cases.

Nanosky’s is one of three known cases involving students with ties to UF who have been accused of sexual assault.

Oscar Vargas, a 20-year-old Santa Fe College student and past social events chair of the UF fencing club, was arrested Dec. 7 after police said he admitting to detectives that he sexually assaulted an acquaintance in June.

The alleged victim told police she told Vargas she wasn’t interested in engaging in a sexual relationship with him after he made a number of sexually suggestive remarks. Shortly after, she blacked out.

Months later, Vargas told the woman they had sex that night. Police said Vargas acknowledged the sex was not consensual. He was arrested after police said he expressed remorse and told an officer he knew what he had done was wrong.

Andrew C. Smith, an 18-year-old UF student from Tampa, was arrested on Jan. 21 after Gainesville police recommended charging him with sexual assault. He allegedly raped his accuser after a semi-formal fraternity event on Dec. 9.

The alleged victim told police she remembered waking up to Smith sexually assaulting her in his apartment. Smith told her nothing happened, but later that day he admitted to having sex with her via a Snapchat message, according to police reports. He acknowledged that his accuser was drunk to the point of being “blacked out” and apologized, according to police reports.

Both Vargas and Smith were released from the Alachua County Jail on $100,000 bonds.

Julia is a reporter for WUFT News who can be reached by calling 352-392-6397 or emailing news@wuft.org.
Previous Attacks on Ukraine ignite UF student support
Next ‘Slaves built the Capitol’: Advocate for abandoned Black cemeteries criticizes Florida senators