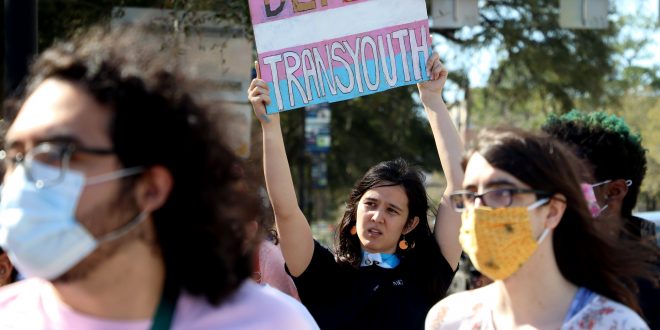 UF student Tessa Sun holds a sign in protest of the "Don't Say Gay" bill during the march in Gainesville on Sunday. "This bill is trying to prevent stuff that really doesn't even happen, because it's not like I learned about sexuality and gender identity in school," Sun said. (Alan Halaly/WUFT News)

By Amy Galo and Daniella Sevares

The Florida Senate on Tuesday gave final passage to a bill that would restrict classroom instruction on sexual orientation and gender identity and the measure now heads to Gov. Ron DeSantis, who is expected to sign it.

The Parental Rights in Education bill – what critics have labeled the “Don’t Say Gay” bill – was approved on a mostly party-line 22-17 vote.

If it becomes law, the measure takes effect July 1 and will impact planned or official classroom instruction for children in kindergarten through 3rd grade. It will restrict conversations on sexual identity and gender in any way that is not age-appropriate, but would not affect spontaneous discussions of such topics, Republican lawmakers have said.

The bill states: “Classroom instruction by school personnel or third parties on sexual orientation or gender identity may not occur in kindergarten through grade 3 or in a manner that is not age appropriate or developmentally appropriate for students in accordance with state standards.”

In addition, the Republican-backed bill will give parents the power to bring legal action against schools if they are unhappy with classroom discussions.

The proposal has gained national attention and sparked a fierce debate as its critics say it ostracizes the LGBTQ+ community, while supporters argue the classroom should be centered on reading and math and sexuality issues left for parents to discuss with their children.

President Joe Biden has denounced the measure, calling it “hateful.”

DeSantis, who is running for reelection this year and is a possible GOP presidential candidate in 2024, has spoken in favor of the legislation and it is anticipated he will sign it.

“I think now we see a lot of focus on transgenderism, telling kids that they may be able to pick genders and all that,” DeSantis said at a press conference in Jacksonville on Friday. “I don’t think parents want that.”

Public support in Florida for the bill is about 40%, with 49% opposing it, according to a poll last month by the University of North Florida’s Public Opinion Research Lab. The poll’s margin of error is plus/minus 3.7 percentage points.

Last week, there were demonstrations across the state against the bill, which resulted in the expulsion of a Flagler Palm Coast High School student who had organized the protests. Students also made their way to the Capitol to protest before the Senate vote on Tuesday.

“We have failed as a Legislature if hundreds of kids stand outside screaming for their rights,” said Sen. Jason W.B. Pizzo, D-Miami, who voted against the measure.

Debate on the legislation began in the Senate on Monday and spilled over to Tuesday, when Democrats continued to express their opposition, calling the bill dangerous, disrespectful and unnecessary.

“You can’t teach gay,” Sen. Gary Farmer Jr., D-Fort Lauderdale, said. “You can’t pray away gay. You’re gay or you’re not, or maybe guess what, you’re both. Who cares?”

After debating the bill for nearly four hours on the Senate floor on Monday, over 10 amendments proposed by Democratic lawmakers were withdrawn or voted down. Farmer offered an unsuccessful amendment to neutralize language in the bill to discussing monogamous marriage instead of heterosexual marriage.

“There are so many children out there that have two daddies or two mamas,” he said. “That’s their home. That’s their love. That’s what they have. They should not be shunned or made to feel insignificant or unimportant or different to the rest of the kids.”

All Senate Democrats voted against the bill and they were joined by two Republicans, Sens. Jennifer Bradley of Orange Park and Jeff Brandes of St. Petersburg.

Sen. Tina Polsky, D-Boca Raton, questioned why sexuality and gender orientation are even being brought up when things of greater concern like classroom discussion about illegal drugs isn’t prohibited under the law.

Sen. Dennis Baxley, R-Lady Lake, the bill’s sponsor, replied, “We are in a trending posture right now. My son’s a psychiatrist, and I said, ‘Why is everybody now all about coming out when you’re in school?’ There really is a dynamic of concern of how much of this are genuine type of experiences.”

Baxley argued the purpose of the bill is strengthening parents’ rights and complained about the media’s portrayal of the proposal.

“Here you’ve got a bill where the media advertises the ‘don’t say gay bill,’” Baxley said. “There’s nothing about this in the bill (about gay) except the media extrapolating it. This is about parents carrying out their primary role of authority.”

The bill’s passage in the Senate comes just days after after DeSantis’ press secretary, Christina Pushaw, touched off a firestorm when she tweeted: “The bill that liberals inaccurately call ‘Don’t Say Gay’ would be more accurately described as an Anti-Grooming Bill.”

She said opponents of “the Anti-Grooming bill are probably groomers themselves.”

During debate on Tuesday, Democratic senators denounced her comments as portraying critics of the measure as pedophiles.

Pushaw defended herself, telling the Florida Phoenix that she tweeted from her personal account during non-business hours and that DeSantis had never characterized the bill as being opposed by “groomers.”

The bill is one of many efforts in Florida and across the country to give parents more control over their kids’ education. Many states are trying to pass legislation or have already passed legislation banning controversial books on race and sexuality.

In Florida, the K-12 Education bill, currently making its way through the Senate, aims to revise training programs for selecting materials used in schools and libraries, as well as change the requirements for adoption of certain materials. It also requires some meetings relating to instructional materials to be open to the public.

That proposal is being condemned by critics as a book ban and censorship bill.

This story was produced by Fresh Take Florida, a news service of the University of Florida College of Journalism and Communications. The reporters can be reached at agalo@ufl.edu and dsevares@ufl.edu

Amy is a reporter for WUFT News who can be reached by calling 352-392-6397 or emailing news@wuft.org.
Previous Josh Hart and the Gatornationals are coming to Gainesville
Next High Springs is divided over the Walldogs and a planned murals festival

The voter registration and party affiliation change deadline for the primary is July 25.