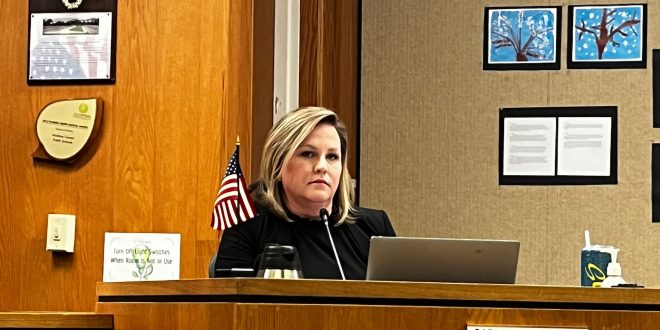 The school board late Tuesday voted to terminate Simon’s contract in a 3-2 vote.

Board members Mildred Russell, Gunnar Paulson and board chair Rob Hyatt voted in favor of Simon’s termination. The two other board members, Leanetta McNealy and Tina Certain, voted for Simon to keep her job.

With Simon gone, the interim superintendent will be the seventh in the district in the last 10 years.

Hundreds gathered and packed the room and an outside seating area at the district’s headquarters in Gainesville. Upwards of 40 people spoke, both in support of and opposition to Simon in a meeting that lasted over six hours.

Russell, a member of the board for six months and who was appointed by Gov. Ron DeSantis, made a motion to terminate Simon’s contract without cause after three board members evaluated Simon’s performance poorly on Feb. 8. Over four hours of public input and board discussion ensued.

“Dr. Simon is a very divisive person,” said Linda Jones, a High Springs city commissioner. “She does not care about the students, their parents or staff. She only cares that she gets what she wants.”

Those who spoke against Simon cited low morale among teachers in the county.

A survey of faculty working in schools across the district conducted by the Alachua County Education Association found that 54% of the over 500 polled would not recommend that someone apply to work for the Alachua County public school system. An additional 56% said they are “more or much more stressed” this school year as compared to last year.

The meeting saw a lively atmosphere with much of the room in support of Simon.

“Why bring this up this late in the year?” said Bishop Christopher Stokes, a senior pastor at the New Beginning Christian Worship Center. “[Simon] has done the best that she could do given the circumstances.”

David Kaplan, a UF environmental engineering associate professor, emphasized that the board was voting to terminate Simon’s contract without cause.

“Without cause,” Kaplan said before a pause, “let’s let that sink in for a moment.”

His words, which refuted that Simon had any cause to be fired, were met with applause from some in the room.

Following hours of discussion of split opinion on Simon and her future, she was given a final chance to chime in.

She spoke as if it were her final time speaking in this setting.

“I’m pretty concerned I won’t be here in the future to have this much time [to speak],” Simon said in a 15-minute speech just before the vote. “So, I’m going to take it.”

Simon said she did not expect to be in the job much longer. She said she was thankful for her nearly two years in the position.

Her words were met with a roaring standing ovation from members of the crowd.

“Any single person in this position is going to have criticism and praise,” Simon said after the meeting. “I’ve given my best. I do know there’s people appreciating it and I appreciate that they see that.”

All five board members were given a chance to speak, with the two in favor of Simon – McNealy and Certain – speaking the longest at over 20 minutes each.

McNealy put the blame of a dysfunctional school system on herself and the board rather than on Simon.

“We are dysfunctional,” McNealy said. “Until we come together and fix us to be better, then we can move forward.”

Certain said: “The superintendent can’t do all the work.”

Entering the meeting, three of five board members had given Simon poor evaluations, with plans to vote her out of a job. After hours of community discussion and deliberation, the same three voted to terminate her contract.

When Hyatt officially voted in favor of the motion to fire Simon, some in the room voiced disapproval.

Following the meeting, Hyatt said that the raucous atmosphere was generally very respectful.

“You have folks that disagree vehemently,” Hyatt said. “This is a very emotional situation.”

As for Simon, she said she already has other job offerings, but for now, she plans to take some time off.

Simon warned that whoever replaces her may have similar struggles.

“The person who takes my place, they’re going to have very similar complications,” she said. “It’s a challenging job. Not a lot of people have this experience, but everyone wants to tell you how to do the job.”

William is a reporter for WUFT News who can be reached by calling 352-392-6397 or emailing news@wuft.org.
Previous Woman who murdered $30 million lottery winner backs bill to keep secret names of those hitting jackpot: ‘It puts a target on them’
Next ‘Forgotten people’: Florida lawmakers aim to recognize, protect abandoned African-American cemeteries