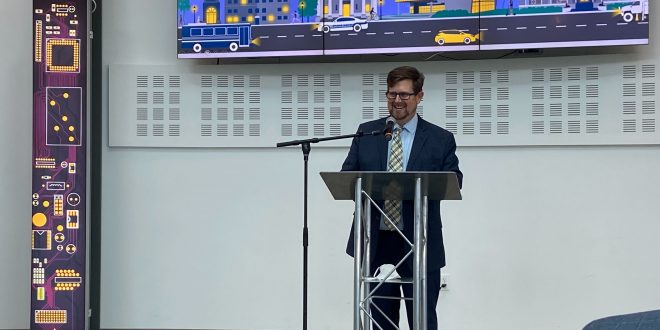 Gainesville Mayor Lauren Poe gives the State of the City Address Feb. 28 at the Cade Museum for Creativity and Invention. The roughly 40-minute speech highlighted the city’s accomplishments in the past year. (Allessandra Inzinna/WUFT News)

As Lauren Poe’s final term as Gainesville mayor comes to a close, he reflected on Gainesville’s progress toward equity and inclusion through community engagement programs and historic protections in his state of the city address.

For the first time in two years, Gainesville residents were invited to the annual State of the City Address, as it took place in person. About 40 people gathered at the Cade Museum for Creativity and Invention Monday as Poe addressed Imagine GNV, the city’s proposed 10-year plan, along with strides in affordable housing and sustainability.

Imagine GNV, set to be approved this year, seeks to better include citizens in the city planning process through town halls and feedback through the plan’s website. It will serve to improve the quality of life for historically underserved communities in Gainesville.

“The aim is to create a future Gainesville where all people can live, thrive and reach their full potential, regardless of their race, age, gender identity, personal history, or economic background,” Poe said.

Instead of giving all communities equal resources, the plan aims to offer more resources to the community members that need it, such as historic African-American communities.

Part of the plan will focus on the preservation and protection of Black neighborhoods from gentrification. Commissioner Desmon Duncan-Walker stood in front of the Mount Pleasant United Methodist Church, the church she attends in the historic Pleasant Street neighborhood in East Gainesville, in a prerecorded video played during the event.

Pleasant Street is one of five historic districts in the city, and it’s rapidly changing due to gentrification. The Mount Pleasant United Methodist Church is one of the few places on Pleasant Street left with historical ties to the African-American community.

The city previously received backlash for not classifying Porters, another black community in Gainesville dating back to 1883, as a historic district because non-historic homes were recently built there. All five currently registered historic districts have non-historical homes, according to a WUFT News report.

Not even historic districts are completely safe from gentrification. Native residents are getting priced out of their historic neighborhoods as living costs sky-rocket, according to an Alligator report.

The Gainesville population has soared at a rate 30% faster than new housing has been built, Poe said in his speech. The result is increased rents and housing costs.

“This widening gap squeezes lower income neighbors out of the market and leads to accelerated gentrification,” Poe said.

In partnership with housing organizations, such as Alachua Habitat for Humanity, the Neighborhood Housing & Development Corporation and the Gainesville Housing Authority, 15 families have been paired with affordable housing and four land parcels meant for affordable housing have been donated.

Preserving the neighborhood, along with welcoming new business, is the goal for the city’s local government, said Kathleen Slesnick Kauffman, historic preservation officer in the Department of Sustainable Development.

While gentrification threatens historic districts in Gainesville, Kauffman wants Gainesville citizens to still recognize their favorite parts of the city in 10 years.

The Historic Preservation Board in Gainesville had vacant seats since before the COVID-19 pandemic, Kauffman said. After appointing four more people to the board in January, all nine seats are currently filled and the full board is working on streamlining the process to label certain areas, buildings, and communities as historical, and therefore protected, she said.

The application to protect a historical place is currently eight pages long. She said she hopes to shorten that paperwork down to three pages in the next few weeks.

“We don’t want to intimidate people who are protecting historic properties,” Kauffman said. “We want to encourage them.”

In line with preserving and fostering local culture, Poe spoke about GNV Art Jams, a series of art and culture-related programs sponsored by the city including figure drawing and urban line dancing. The goal of the programs is to provide diverse entertainment.

The figure drawing event focused on human imperfection, Ladendorf said. The event set out to feature diverse people as models.

“We want to make sure that whatever we do as far as the city, we create welcoming spaces for everyone,” said Leslie Ladendorf, acting manager of Parks, Recreation and Cultural Affairs and Assistant Cultural Affairs manager, in an interview.

GNV Art Jams is a new program, piloting with two attractions to start out with, but Ladendorf is hoping to build on that as it continues.

Poe also spoke about sustainability and recently approved solid waste policies. These include encouraging community reuse, expanding recycling, improving commercial garbage collection, and helping to eliminate single-use plastics from the city’s waste stream through participation in the Race to Zero, a pledge by cities across the nation to create a decarbonized economy by 2030. Gainesville joined the initiative in October.

The city reported 27 million pounds of diverted trash from landfills, about $250,000 saved in disposal costs through recycling and about $200,000 made in revenue from reusing items. The city is working with the USDA, Grow Hub, Working Food and Beaten Path Compost to recycle organic materials and reduce emissions of greenhouse gasses.

“These are significant accomplishments,” Poe said. “But there’s still more work to do.”

At the end of the speech, Poe expressed his pride in the Gainesville community. Elections for the mayor seat will take place Aug. 23.