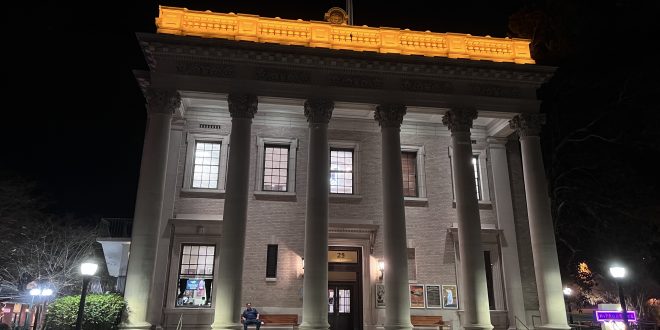 The Hippodrome’s cinema showed “Flee” on the first weekend of February. The theater is now showing “The Worst Person in the World” and “Drive My Car.” (Kyle Bumpers/WUFT News)

Local theaters have been hit hard since the beginning of the COVID-19 pandemic. Two years later, low attendance numbers persist.

Playhouses and auditoriums have had trouble retaining staff and attracting audiences since March 2020. But theaters are finding ways to curb the lingering effects of the pandemic.

The Hippodrome Theatre began a mystery movie series with limited attendance to overcome COVID-related hurdles and attract people to the theater. Hippodrome staff brainstormed the promotion as a way to bring business back in January after the omicron variant shut down the theater for about a month. In 2020, the theater closed for about 15 months.

Theaters in Alachua County are adapting to the continuing effects of the COVID-19 pandemic to stay in business. While Gainesville venues struggle to survive tough times, theaters across the U.S. face similar problems. More than 60% of Americans say they have not visited a cinema since the pandemic.

The Hippodrome showed “Candyman” (2021) Jan. 21, the first in its new cinema initiative. In the days leading up to the screening, the theater’s Facebook page posted hints for participants to guess the title of the film. The first five people who guessed the movie correctly were given free tickets.

Matthew Cugini, the Hippodrome’s cinema program manager, said he wanted to find a way to engage audiences with something they might not usually watch otherwise. By only informing participants about the genre, Cugini said they could make sure the movie would interest them — and also surprise them.

“There’s this feeling of discovery that you get with movies that you have experienced for the first time in that sort of setting,” Cugini said.

For Valentine’s Day, Cugini planned a “Galentine” theme for February. He scheduled movies that emphasized female friendships, including “Thelma & Louise,” “The Sisterhood of the Traveling Pants” and “Booksmart.” He dropped three hints on Facebook prior to the screenings for people to guess the titles.

After reopening in June 2021, the theater drew an audience for a showing of “Tom Petty: Somewhere You Feel Free.” But by the end of December, only one or two people attended per show.

The Hippodrome closed for one week in December and two in January, Cugini said. Hoping to avoid another closure, he decided to offer a new film series to bring in more audience members.

After his first Facebook posts, Cugini said he noticed he was reaching his target audience. Younger people were engaging with the hints.

“I always wanted to engage people from UF,” Cugini said. “When I went to UF, I had no idea that the Hippodrome was here.”

For now, he said he’ll continue to provide audiences with movies that will take their minds off the current state of the world and the pandemic. He prioritizes movies that can provide patrons an escape from these realities.

Other theaters have struggled to keep a full staff when they manage to open. The Gainesville Community Playhouse has been short-staffed since the quarantine, said Kathy McGlone, the theater’s board secretary.

Staff members, including the stage manager, tested positive and were unable to come to work, McGlone said. The theater has been without ushers and bartenders because they felt uncomfortable returning to work. Many loyal volunteers have also been cautious about coming back.

“My own partner, who has volunteered at GCP [Gainesville Community Playhouse] for many years, has not seen any of the shows we’ve put on since we’ve started back,” McGlone said. “She will not go to a show.”

The Acrosstown Repertory Theatre, which is still being used for live community theater, has faced similar issues, said Jackie Collins, an actress and director for multiple community theater venues in Gainesville.

She is directing “The Full Monty” with the Acrosstown Repertory Theatre, marking her first time directing a show for a community theater. But COVID-19 isn’t making her job any easier. She said she has had to hold rehearsals with cast members through Zoom and make decisions about whether to perform with or without masks.

Everyone involved in the plays is required to be vaccinated and are being asked to stay home if they are symptomatic, Collins said. Shows have had to be called off because of COVID-19 cases.

“Somebody got COVID, and other people weren’t comfortable,” Collins said. “They actually canceled the entire show.”

McGlone faced similar issues when managers at the Gainesville Community Playhouse tested positive for the virus. She and other staff members had to fill in when the house and stage managers contracted COVID-19. People had to do jobs and fill shifts they had never had to work before.

With audiences required to wear masks and limited capacities in theaters, it has been difficult to draw people to shows, Collins said. Friends of actors have even walked out of shows because they didn’t want to wear masks.

“It has to be a show that people know or that they hear good word[s] about, so opening weekends are usually very low in attendance,” she said.

Collins, who is also a middle school teacher at Bishop and Lincoln middle schools, said she has noticed that her students’ shows have larger audiences than audiences for community theater because parents and families come out to support the children.

“If there are kids involved, if it’s a school show, it’ll be packed,” she said. “Everyone’s friends and family are going to come support their kid. Community theater is where it’s tough.”

Performing in these conditions is difficult for actors, said Andrea Young, the director of “The Importance of Being Earnest” at the Acrosstown Repertory Theatre. She said she has seen actors during rehearsals and performing in front of a crowd, and she has noticed the difference it makes to have an audience at the show.

Masks make it difficult to see the audience’s reaction, Young said. The actors don’t know how to gauge their performance when they can’t see the attendees’ faces.

“They feed off of the audience, especially in a show like this,” Young said. “It’s a comedy. If people aren’t laughing, you feel like you failed.”

Mallory Rubek, an actress in Collins’ show, also emphasized the importance of the audience’s presence. She said spectators give the actors feedback, which tells them whether they are enjoying the show.

An avid theatergoer, Collins said she has witnessed other live shows with sparse attendance.

“I went to the [Hippodrome] on opening night of their latest show, and there were just not a lot of people there,” Collins said. “Nobody wants to sit there with their mask on.”

Nicole Lovelace, another actress from Collins’ cast, also attended a show the Hippodrome produced. She said the smaller crowd lessened the play’s impact.

Lovelace said the feel of a show with a bigger crowd is much different from that of shows with fewer people in attendance. Even though the audience didn’t have the same energy as the energy in sold-out shows, she felt everyone was enthusiastic about seeing the show.

“I feel like they were as excited as they could be,” Lovelace said. “A group makes you act a little bit different, feel a bit more comfortable, and I feel like they couldn’t really express that enjoyment as much.”

While pandemic-related setbacks may continue indefinitely, theaters are doing anything they can to get more people out to their shows.

“This is how the world is,” Collins said. “This is what we’re doing, and you should still come if you love theater and want to support people regardless.”

Kyle is a reporter for WUFT News who can be reached by calling 352-392-6397 or emailing news@wuft.org.
Previous The Point, March 1, 2022: A bill changing how Alachua County elects commissioners is moving through the Florida House
Next UF veterinary hospital in Ocala looks to increase quality of care for horses