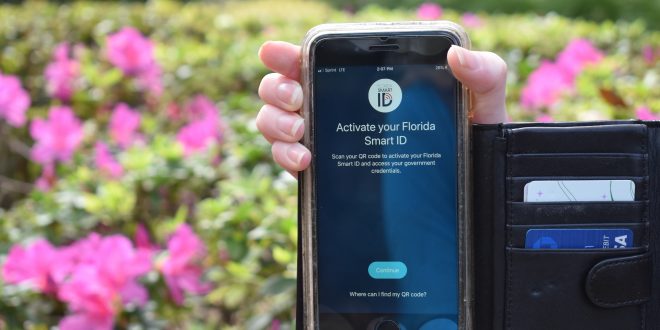 Society is standing between the transition from the physical medium to a digital world of driver licenses. (Denisse Flores/WUFT News)

The first time Daniela Corredor lost her passport, she wondered why, with today’s technology, there weren’t any digital alternatives to official documents.

Soon, there will be. Virtual IDs will be rolling out across Florida by the end of the year. The Florida Department of Highway Safety and Motor Vehicles is in the final stages of testing the IDs before officially launching the state’s first mobile driver’s license, Deputy Communications Director Jessica Kelleher said.

In November, the department created a mobile application so people like Corredor, who tend to lose track of physical documents, can have a mobile version of their driver’s license at their fingertips. The app, called Florida Smart ID, is a secure option to the physical driver’s license. These virtual IDs will function as a contactless method of showing proof of identity and age while protecting users from fraud.

“Technology today is constantly evolving to meet the needs of consumers and enhance their way of life,” Kelleher said. “The Florida Smart ID is one way in which Florida is meeting consumers where they are at – on their phone.”

The department is committed to staying up-to-date with society’s technological advances, Kelleher said. Access to digital IDs would allow a smoother travel experience for frequent flyers like Corredor.

“I travel a lot, and I have lost my passport many times so I feel just by being able to have it on your phone at plain sight will help a lot,” Corredor said. “Especially when you are at the airport, it gets so messy, you have to go through the Transportation Security Agency, so it is always a big mess trying to carry everything you have plus your passport.”

The app is currently available for download on the App Store, but digital driver’s licenses are not yet recognized by the state, said Graham Glover, public information officer for the Gainesville Police Department.

Florida Smart IDs will work in conjunction with law enforcement officials and business owners, Kelleher said. The user will select a method of verification, such as facial recognition or a fingerprint scanner, and a barcode will appear for law enforcement officials or a retailer to scan. The person requesting proof of identification or age will need to have a Florida Smart ID verifier app on their end.

Apple announced in September that it is currently working with the Florida Department of Highway Safety and Motor Vehicles to add driver’s licenses to Apple Wallet. The feature has already been implemented in the state for boarding passes, event tickets and credit and debit cards.

Among the first states to have access to this Apple Wallet feature are Arizona, Georgia, Connecticut, Iowa, Kentucky, Maryland, Oklahoma and Utah.

Arizona, Oklahoma and Delaware are already using digital driver’s licenses through an alternative mobile app powered by IDEMIA, a multinational technology and security company headquartered in France. Arizona’s app called Arizona Mobile ID, allows users to show proof of age without disclosing their address, height, weight or date of birth. Users can choose what information the app discloses to retailers. This information can only be accessed through the use of facial or fingerprint recognition.

Arizona residents do not need to go to a DMV to apply for a mobile ID, an Arizona Department of Transportation representative said. They simply download the app, take a picture of the front and back of their driver’s license, perform facial recognition and enter a pin that links it to an account.

“The digital ID on your phone is accepted by the TSA, law enforcement and it is becoming more popular with businesses,” the representative said.

In cases where an ID would be needed to buy alcohol, Gainesville’s Total Wine & More, for example, does not accept digital copies or photos of IDs, Line Manager Mark Kircher said. The store requires physical IDs for proof of age. Florida Smart IDs would need approval by the Alcohol and Tobacco Tax and Trade Bureau before the store would accept them as proof of age, he said.

“Right now, they have not approved us for taking anything other than the actual physical ID,” Kircher said.

Jennifer Bailey, Apple’s vice president of Apple Pay and Apple Wallet, said TSA is on board with the idea of mobile driver’s licenses.

A Miami International Airport TSA coordination center officer said employees have been told that the virtual IDs are expected to be implemented sometime this year. They are awaiting further information on how to process them through passenger screening.

State politicians, including Sen. Doug Broxon, have already begun to push for digital license plates for state vehicles and, eventually, motorists. The Senate Transportation, Tourism and Economic Development Appropriations Subcommittee authored two bills Feb. 2. The proposal is currently one stop away from the Senate floor. If approved, digital license plates would be available as soon as July 1, 2023.

Maureen Johnson, the motorist services administrator at the Alachua County Tax Collector, believes the bill will pass and be approved by FLHSMV given recent technological advances. But just like Florida Smart IDs, the mobile version of license plates will not replace the requirement of a physical license plate. Motorists will still need to buy a physical plate but have the option of leaving it at home.

Behl added that the fear of spreading germs through physical contact may be influencing this transition to digital IDs.

“I can see where, especially in the age of coronavirus and people worrying about passing stuff back and forth and contaminating their property,” Behl said. “That may be a consideration why this is up and running, but there is a lot to be discovered when it is used.”

Although these intuitive mobile driver’s licenses may be more convenient for the technology-savvy, many elderly residents may have a hard time familiarizing themselves with technology.

“Sometimes young people think that the opinions of the elderly like me aren’t worthy,” Plasencia said. “In this matter, it is very important to keep in mind that most people over 50 years old may not know how to use an application of this type.”

Despite the challenges some Florida residents may face, virtual IDs would provide an additional option for those like Corredor, who have yearned for a digital alternative.

Denisse is a reporter for WUFT News who can be reached by calling 352-392-6397 or emailing news@wuft.org.
Previous The Point, Feb. 24, 2022: A nontraditional UF research project aims to help Gainesville’s historically Black neighborhoods
Next Fort McCoy horse rescue continues to trailblaze amid debt