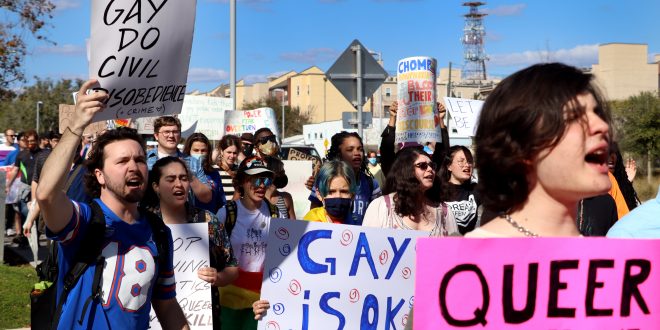 Pro-LGBTQ+ protestors march down Southwest 6th Street to speak out against the "Don't Say Gay" bill, which is making its way through the Florida legislature. (Alan Halaly/WUFT News)

Cloaked in a flag with shades of teal and seafoam green representing queer men, Rey Arcenas shouted into a megaphone: “This legislation will kill queer youth.”

Arcenas, 19, a freshman history and philosophy major at the University of Florida, spoke just before a crowd of 150 began a protest march in Gainesville on Sunday against state legislation dubbed “Don’t Say Gay” bills by LGBTQ activists.

“If you are queer – and you probably are if you’re here – or if you care about any queer person in your life, we call on you right now,” he said at University Avenue and 13th Street.

“Out of the closet,” Arcenas, of Sebring, Highlands County, yelled.

“Into the streets,” the crowd shouted in response.

Proponents say bills HB 1557 and SB 1834 aim to bolster the rights of parents in education. They would ban the discussion of sexuality and gender identity in elementary schools and prevent its encouragement in all schools in a way not deemed “age-appropriate.”

The bills would also make parental notification of anything related to the mental, emotional or physical health or well-being of their children mandatory – a measure some worry would require school staff to ‘out’ LGBTQ+ students to their parents.

Led by members of Take Action Florida, UF Young Democratic Socialists, Students for Justice in Palestine and the local chapter of Planned Parenthood, the protesters marched to Cora P. Roberson Park to state that the bills would negatively affect LGBTQ+ people.

Buchholz High School English teacher Kendra Vincent, faculty sponsor of the school’s Gay-Straight Alliance, told WUFT News she’s watched over the course of her career as LGBTQ+ inclusion has blossomed throughout Alachua County. She recently attended a district workshop for alliance sponsors, and can now leave an “AKA” roster to help substitute teachers keep from calling transgender children the wrong name.

Vincent said she worries that school districts would be required or feel forced to shutter inclusion efforts should the legislation pass.

“The students need more support, more protection and more love,” she said. “Our supposed representatives are telling them that their love is shameful.”

Activists have drawn comparisons to “no promo homo” laws that lawmakers in the ‘80s and ‘90s created across the country during the onset of HIV/AIDS. Barring all discussion of LGBTQ+ people or issues, those laws still exist in four states.

Sen. Dennis Baxley (R-Ocala), a co-sponsor of the Florida bill, came under fire last year for sponsoring another bill that proposed limits to Bright Futures funding.

“Our students belong to families and they are not wards of the state,” Baxley wrote in an email about the pending bill. “Parents should decide what is age appropriate content for their children.”

During the march, Tessa Sun, 22, a UF materials engineering senior from Palm Beach County, held a sign with the transgender flag stating “Defend Trans Youth.” Sun said she wishes transgender people were included in sexual education curriculum when she was in grade school.

“I could count on one hand how many out queer people there were at my high school,” Sun said. “If only they could have told me what a trans person was in sixth grade so I didn’t have to figure it out through the internet by myself.”

Brandon Wolf, of Orlando, is the spokesperson for Equality Florida, a statewide LGBTQ+ advocacy group which lobbies against nearly 100 bills per legislative session. He said only one anti-LGBTQ+ bill in recent memory became Florida law: banning transgender girls from playing sports on girls teams. The bill was initially defeated, but later passed. Wolf said it taught him to never take small victories for granted.

“That kind of othering of LGBTQ people is at the core of the homophobia and transphobia that has been used to justify violence and discrimination against LGBTQ people since the dawn of time,” he said.

Wolf said such bills reflect a bid by Gov. Ron DeSantis to lay the groundwork for a presidential run in 2024. However, Wolf said, the bills are no less divisive as more blatantly homophobic and transphobic laws throughout U.S. history.

“While it has new packaging … (and) politically correct language around it, it’s the same old bigotry with a fresh coat of paint,” he said.

Conservative lobbyists have latched onto the controversial bill as well.

John Stemberger, president of the Florida Family Policy Council, said the bill should be more aptly named the “Don’t Turn My Son Into a Girl” bill. Stemberger referenced a lawsuit in which a Jacksonville school withheld information from a father about his daughter’s gender dysphoria. The first the father heard about it was when the student tried to hang herself.

Stemberger said he doesn’t mind if conversations about identity are student-led, saying that limiting student discussions would become a free speech issue. The problem comes when teachers and staff try to intervene, he said.

“What we’re seeking to do is allow parents to be more involved in knowing what’s going on with their children’s lives,” Stemberger said.

It remains unclear how the Florida Department of Education would instruct school districts to implement the law if it passes.

Cassie Palelis, a spokesperson for Florida Education Commissioner Richard Corcoran, said it’s too early to comment about how the department would instruct schools. Rather, she wrote in an email, parents continue to play the most important role in a child’s education.

“Schools should work with parents as part of a partnership in a child’s education, and not hide issues from parents or interfere with the relationship between a parent and his or her child,” Palelis stated.

Alachua County Public Schools spokesperson Jackie Johnson said while the legislation’s broad concern is for LGBTQ+ students’ well-being: “The state has already stepped into a very controversial area. Once again, school districts are going to be caught up in the middle of that.”

Marion County School Board chair Eric Cummings said he expects people on all sides of the political spectrum to have strong opinions about implementation. Conversations about LGBTQ+ student issues are uncomfortable but necessary, he said.

“These kids aren’t going to go anywhere whether they’re straight, gay, or trans or whatever,” Cummings said. “We have to learn how to live in the world that we’re in, versus trying to make everybody conform to different things, and do it within the law.”

The negative impacts of revealing a student’s sexuality or gender identity to his or her parents are well-documented by academic research, said Luke Harness, a graduate student pursuing a doctoral degree in counseling education and school counseling at UF. He said all accredited and licensed counselors in Florida are required to take a human sexuality class.

Harness, who identifies as gay, said an official “outing” policy would cause many counselors to leave public schools. It would also increase rates of LGBTQ+ homelessness and create mental health issues that could lead to other problems like addiction and suicide, he said.

Mcvea-Smith said she’s concerned about how the bill could affect sex education efforts, for which standards of inclusion already vary widely from district to district. Newer inclusivity efforts like LGBTQ+ History Month in Broward County could no longer exist, she fears.

“No one is looking out for these children,” Mcvea-Smith said. “These children may have questions or concerns and have nowhere else to go.”

Regina Livingston, founder of Unspoken Treasure Society, a Gainesville-based LGBTQ+ resource center, said she traveled to Tallahassee recently with Equality Florida to meet with legislators in person. She wonders why lawmakers continue to target her and her peers.

“They go to the bottom of the barrel, which is LGBTQIA,” Livingston said. “(They) bypass guns, drugs, the most important things that are … taking America apart. They bypass all that stuff to bother with the LGBTQIA community.”

A transgender woman of color who frequently works with north central Florida LGBTQ+ youth, Livingston, 49, said the bill would be detrimental to young people in her community.

“Can you imagine what could happen?” she said. “… It’s like a kick in the face to the work that we’ve done just for LGBTQIA youth to be able to just be comfortable in their skin.”

Alan is a reporter for WUFT News who can be reached by calling 352-392-6397 or emailing news@wuft.org.
Previous Soil ceremony honors five lynching victims in Waldo
Next The Point, Feb. 21, 2022: Questions about voter registration changes arise in South Florida