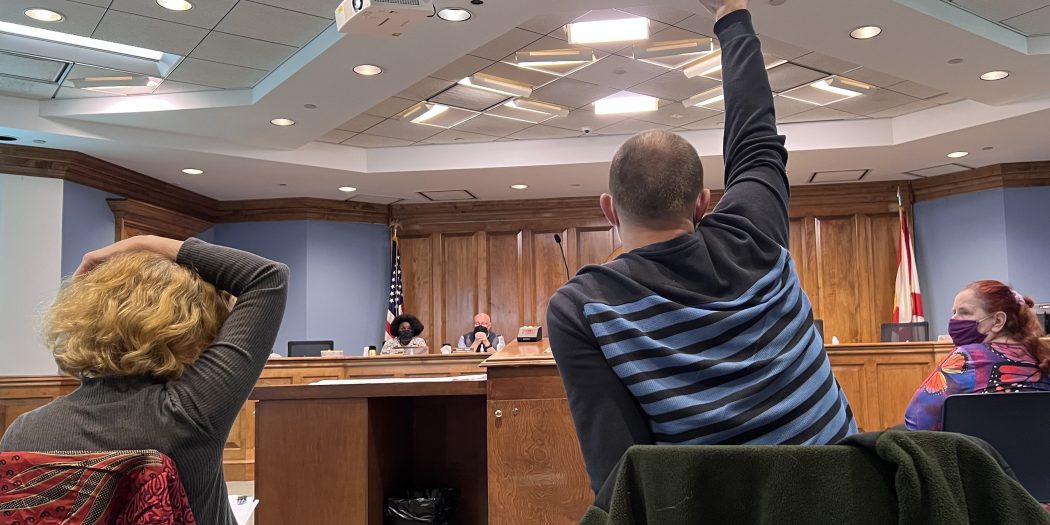 Residents attending a Gainesville workshop on the Royal Park multifamily development were growing restless as Mayor Lauren Poe spoke Wednesday night. Poe warned everyone to stop yelling out or he would adjourn the meeting early. (Kyle Bumpers/WUFT News)

Gainesville residents are concerned about this affordable housing development

Tensions were riding high at a city workshop Wednesday night as Gainesville residents expressed their sometimes loud objections to an affordable multifamily housing development to be built on a 27.48-acre tract of land behind Regal Royal Park Cinema.

Neighborhood residents told the Gainesville City Commission they were most concerned about traffic, flooding and the environmental impact the development would cause.

Construction on the development could start as early as March and would take about 15 months to complete. In the meantime, board members said they will continue to address issues raised by Royal Park area residents and other commission members.

Scott Zimmerman, a co-founder and manager with the Banyan Development Group, said the company develops affordable housing that has “a first-class living feel.” The complex would include 192 two-bedroom apartments with proposed rents of $900, Zimmerman said.

“We focus on green, energy-efficient apartments,” he said.

Most of the people in attendance live in neighborhoods adjacent to the new development, and many voiced concerns that the plan will have more negative impacts on the area than positive ones.

Traffic congestion was a particular point of concern among residents as Northwest 39th Road is a dead-end street, and traffic backs up at the light that connects the road with Newberry Road. Residents said the light stays red for minutes at a time, and the wait is even worse when Newberry Road gets backed up.

Scott Wright, a senior planner in the city’s transportation department, said his team is working on finding a solution. He said there is a plan to increase the time the light remains green on Northwest 39th Road to make exiting the street easier.

Some residents in attendance said they decided not to share their opinions with the committee because they didn’t feel the members would take action on their complaints. Other residents asked for action and urged the other attendees to sue the city when their homes are affected.

Zimmerman said the Banyan Development Group has done extensive research of the area so the development will be as environmentally friendly as possible. But many residents at the meeting said they were not comfortable with their evaluations. When asked about the group’s tree survey, Zimmerman said his team looked at the area to see which trees they should save.

Residents of Bartram Woods, an adjacent neighborhood off Northwest 39th Road, were also concerned about flooding. They said they worry that they and the people who will live in the development could face flooding issues if the complex is built on the planned site, which is on a flood plain.

Megan Walker, an area resident, said she felt that putting people in this area would not be fair to them. She said placing low-income residents in a flood plain is risky to those future residents.

“We need to protect them,” Walker said.

Gail Mowry, a city engineer and utility designer, said there are plans in place to compensate for building in a flood plain, including adding a retention pond and underground channels to help collect excess water. The development will also build the first story so floors are more than a foot above ground in case there is flooding.

Residents at the workshop said they felt left out of the planning process because they were not informed of meetings or received meeting notices on short notice. City Commissioner Adrian Hayes-Santos said only people within 400 feet of the proposed site were notified. Dorothy Sullivan, who lives near Northwest 39th Road, said the city has already made up its mind on the development despite citizen input.

“No matter what we say, you’re going to develop it anyway,” Sullivan said.

City Commissioner Desmon Duncan-Walker, who with Commissioner Harvey Ward stayed to talk to residents after the workshop adjourned, said everyone’s concerns were legitimate, and the committee will need to pay more attention and change how it approaches these meetings. She suggested that the developer draft a community benefits agreement that describes the project’s benefits to the community to garner neighborhood support for the development.

“That’s probably an instrument that we want to entertain,” she said.

Mayor Lauren Poe said he hoped for better dialogue in the future to quell resident concerns.

“I know that some of you are still frustrated,” Poe said. “Hopefully, the developer listens to your input as well.”

Kyle is a reporter for WUFT News who can be reached by calling 352-392-6397 or emailing news@wuft.org.
Previous The Point, Feb. 18, 2022: Cynthia Chestnut sworn in as Gainesville city commissioner
Next Some signatures of Florida voters whose registration changed to Republican different than prior samples