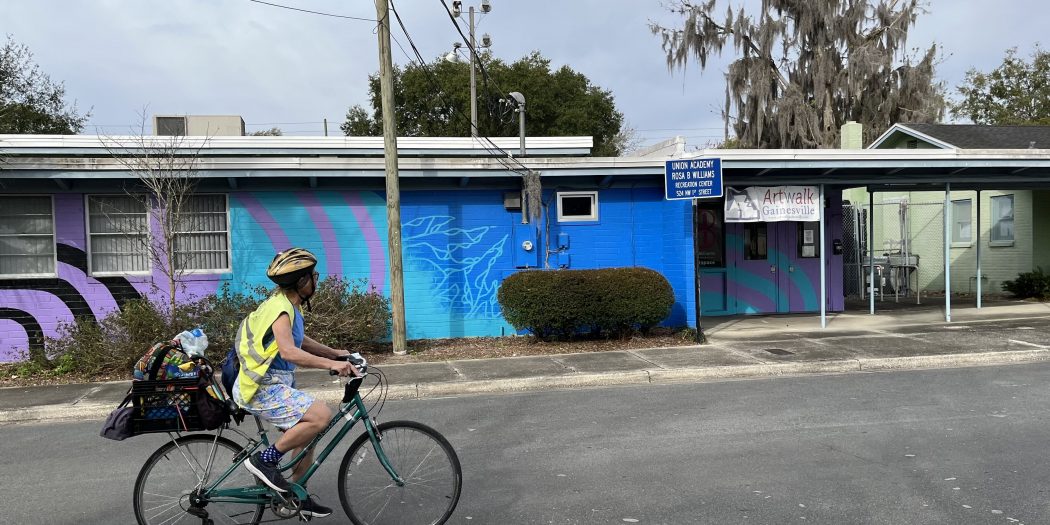 A woman bikes past the Rosa B. Williams Center on Northwest First Street in Gainesville. “Rosa B. is in an area that used to be the heart of the Black community,” Turbado Marabou said, “… but through gentrification, all of a sudden there was new rules.” (Bella Ruiz/WUFT News)

Tiffany Pineda appreciated being part of a cultural event focused on Black love and not some sort of recent social justice trauma. Queenchiku Ngozi longed to be seen as an equal artist in her community. Kiara Laurent wanted a safe place for them to share their poetry.

“It’s really hard for me to find spaces where I can feel vulnerable in sharing my work,” Laurent said.

They were among several artists featured during “A Poetic and Visual Celebration of Black Life Culture and Love,” a virtual event hosted recently by Terri Bailey, a local poet and artist who held a similar event at the Thomas Center in 2019.

Black artists said at the event they must routinely take it upon themselves to build their platform and grow their representation in Gainesville. They also questioned whether the city was doing all it could or should in terms of helping them to promote Black artists and their work.

Bailey, 55, lived in Atlanta for 10 years while working at a feminist health care center before returning to her native Gainesville. She was surprised to see how her city had changed.

“When I came home, I just was really shocked at the cultural degradation,” she said.  “We just didn’t have access to the things that we used to or on the same scale.”

Changes in the city government have made it difficult to maintain progress for Black artists, the artists said. Whereas prior administrations may have had a stronger connection to the Black community, Ngozi said she feels the newer officials are less receptive.

One of her frustrations is that murals painted by artists who are not from Gainesville – or even Florida – comprise many of the works downtown.

Bailey’s husband, Turbado Marabou, is also an artist and the founder of Deeproots Arts & Culture Creative Services in Gainesville. He noted that Black artists face an undervaluing of their services when finding work in Gainesville, particularly in the commissioning of murals.

Marabou, 58, said he was once paid $200 to work on a mural without being offered a stipend for paint. He warned the city about disregarding local talents, especially in the case of international artists being chosen for mural projects.

“They were getting paid very well for some of the work that you see downtown,” Marabou said. “However, the local artists were not given a fair opportunity. When they did a call for artists, they did not give opportunity for local artists to put in their designs.”

In 2020, the city hosted a social justice-themed mural painting event with 12 artists selected by its 325 Walls program. It put $9,000 toward positioning Gainesville-based artists to produce murals that addressed the national reckoning on social justice. Artists or artist crews were paid $450 per assigned mural, according to the city’s website.

“The selection of muralists are through a RFP (request for proposal) process and then scoring system,” Carol Velasques Richardson, museum coordinator for the A. Quinn Jones Museum & Cultural Center, wrote in an email to WUFT News. “We will continue to evaluate our guidelines to make sure the application process is fair and equitable.”

Others feel a lack of respect or cultural understanding leads to artists being sidelined.

For Pineda, 48, the process of creating is deeply personal. She has lived in Gainesville since 1991, and says she has seen no real strides in the inclusion of Black artists. Pineda also bemoaned undue struggles when giving her rates for poetry or African dance.

“They can be just disrespectful and dismissive as to when you tell them the price of something,” she said of the reaction of people looking to hire her.

“They don’t understand,” Pineda continued, “like, ‘Why does it cost that much? Why do you want that much? Why are you doing that? It’s just a mural.’ No, it’s not. It’s not just a poem. It’s actually a piece of a moment of my time that captures an emotion that I’m gaining to share with you.” 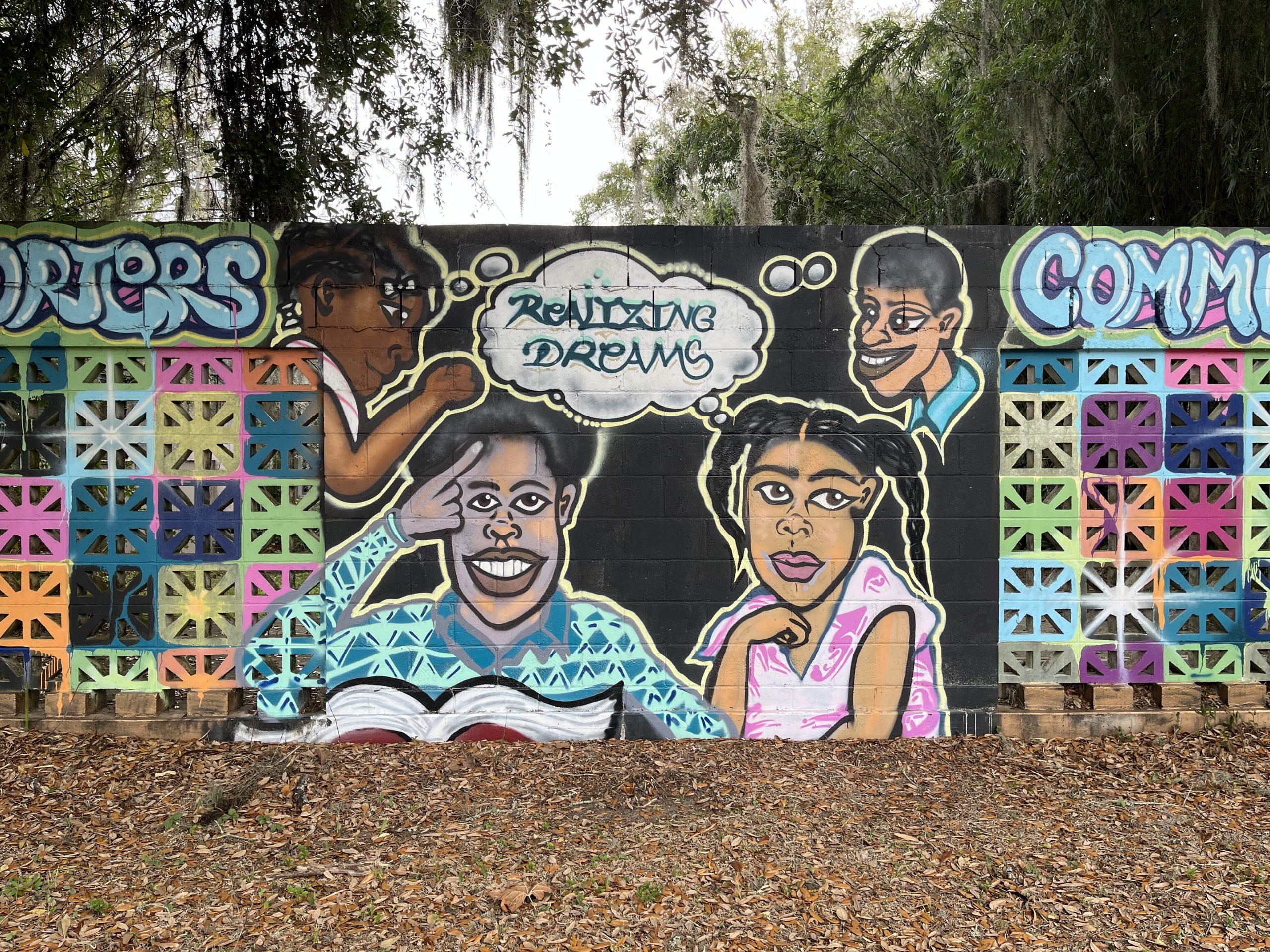 Black artists and poets agreed that there are too few city events that engage and actively welcome their work, let alone share it with their community.

“I have the mindset of the Black community before integration,” he said, “when we had no choice but to build whatever it is we wanted – because we could not go across the street, the tracks, we couldn’t go certain places. Necessity is the mother of invention.”

Historically, Gainesville has been a hub for Black art and music. The Cotton Club played a prominent role during the mid-20th century as part of the Chitlin’ Circuit, a group of venues for African American musicians and performers. Local native Bo Diddley as well as other icons James Brown, B.B. King and Ray Charles were known to have performed there.

Laurent assists in running DOPENmic, an open mic venue aimed at uplifting the voices of Black, Indigenous and LGBTQ+ artists.

“I just know there’s just a slim amount of spaces for Black artists to show their work,” Laurent said. “And it’s usually spaces that were cultivated by Black people.”

Gainesville officials say they have made moves to preserve buildings with significance in its Black history. For example, the home of A. Quinn Jones, who served as first president of Lincoln High School in 1923, was listed on the National Register of Historic Places in 2010, and opened to the public as the A. Quinn Jones Museum & Cultural Center in 2017.

“We host up to 20 programs and plan to offer more programming which will provide opportunities for Black artists as presenters and create an audience experience,” she said.

Richardson said the city gives operating support through 30-year grant programs to organizations that serve Black artists throughout the year. She listed the Cultural Arts Coalition, The Star Center Theater, The Actors Warehouse, The Cotton Club Museum, UF Arts and Medicine and the Hippodrome Theater as examples of these venues.

Still, at the recent cultural event Black artists bemoaned only being called upon in Black History Month, only to be met with radio silence from city cultural leaders the rest of the year.

“Black artists shouldn’t be looked for just on February,” Ngozi said. “Black artists have to live 12 months just like everybody else. Every year. And it’s sad that the only time Black artists is important is on Black History Month or Kwanzaa.”

Bella is a reporter for WUFT News who can be reached by calling 352-392-6397 or emailing news@wuft.org.
Previous Alachua County Health Care Advisory Board meets about health disparities in East Gainesville
Next Buchholz High School student discovers and publishes new calculus technique