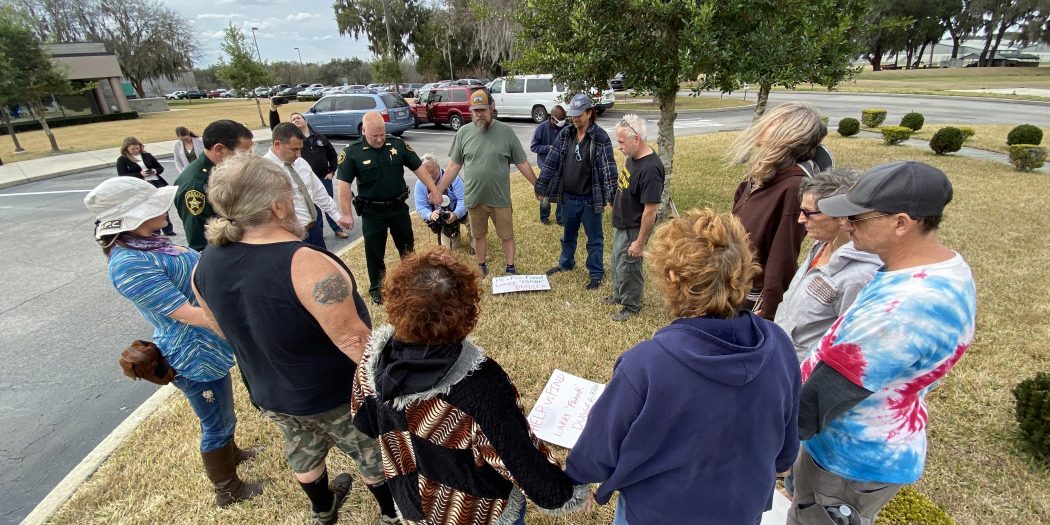 Several members of the Rainbow Family said they fully supported what law enforcement was doing to help solve the crime. (Nicole Geary/WUFT News)

Just days after the one-year anniversary of his death, a dozen people gathered in front of the Marion County Sheriff’s Office Tuesday afternoon with handwritten signs that said, “Help Us Find Larry ‘Frank’ Dugger’s Killer.”

The Rainbow Family of Living Light is an alternative-living group that has gatherings yearly in the Ocala National Forest, and the shooting that killed Dugger took place at last year’s gathering. According to Joshua Hanson, who has attended almost every Rainbow Family gathering since 1997, many of the vigil’s attendees felt that the sheriff’s office hadn’t released enough information about the investigation since then.

On Tuesday, Marion County Sheriff Billy Woods emerged from the building and addressed the attendees.

Woods said that although the Dugger case had a rare amount of cooperative witnesses, the department had since gone down every avenue available and still had no updates.

He and a pair of deputies joined hands and prayed with the group. Hanson sobbed gently.

Several attendees said that they fully supported what law enforcement was doing.

Pop-Tart, a Rainbow Family member named for her inability to cook, witnessed the shooting, and she got choked up talking about the effect that the incident has had on her mental health. Dugger was her friend, and his death affects her on a daily basis.

She felt that there was truth to what Woods had to say, but his words hadn’t given her any answers.

Dugger was well known in the Rainbow community, according to Pop-Tart.

Both Pop-Tart and Rainbow gathering attendee Tina Nord had one word for what they hoped would come out of Tuesday’s vigil: “Closure.”

Hanson also said he needed more answers. He thought it was beautiful that the sheriff’s office leadership had come out and talked to and prayed with the group. However, he said he wished they had come out to the woods to talk to people this year.

“I feel like it would also ease some tension, because a lot of these kids, they don’t like the police,” Hanson said. The easing of tensions between Rainbows and law enforcement was among the prayers the gathering offered up.

Nicole is a reporter for WUFT News who can be reached by calling 352-392-6397 or emailing news@wuft.org.
Previous Supply shortages are impacting Gainesville-area hunger relief programs
Next The Point, Feb. 16, 2022: The Marion County Sheriff joined Rainbow Family members in prayer over an unsolved murder