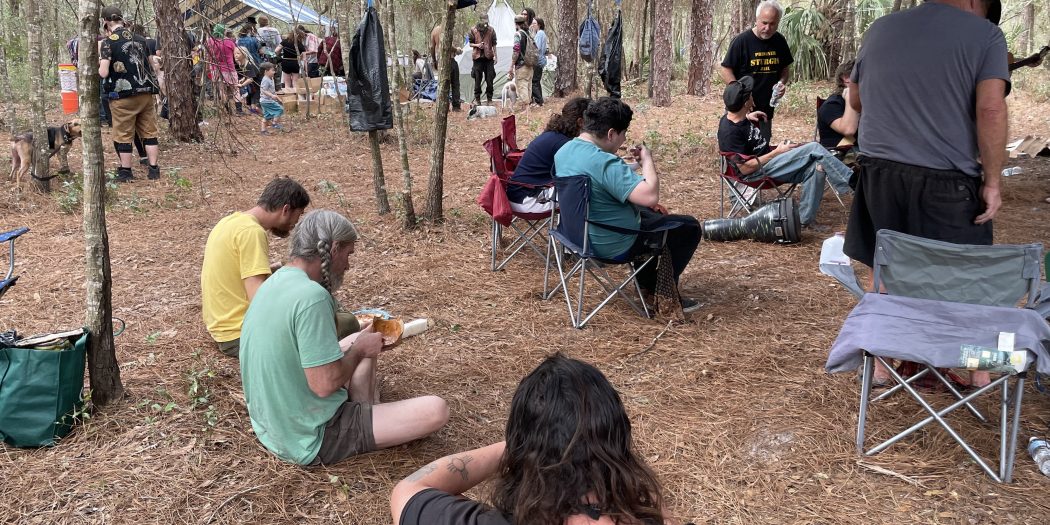 The Rainbow Family of Living Light gathers to eat and listen to music after a chili cook-off Saturday in Ocala National Forest. "Everybody is just so generous here, and just great, man," said Aryon Moleen, a first-time Rainbow attendee. (Gabriela Rodriguez/WUFT News)

By Sarah Breske and Gabriela Rodriguez

Five years ago, Kimmi Kreuger never would have imagined joining the Rainbow Family of Living Light each February in Ocala National Forest. Being with hundreds of kindred spirits in the woods for two weeks each year since, she said, has saved her life.

Yet Kreuger, whose communal last name honors the iconic scary movie character, almost didn’t come to the two-week event this year in Silver Springs. In the end, especially after the tragic circumstances that cost her best friend his life, she found herself needing her “family” to heal.

“This is my home,” Kreuger, who declined to give her legal name, said as she smoked a cigarette among 200 other Rainbows in the forest Saturday. “This is where I want to be.”

She and many others there said this gathering feels different. They are missing Larry “Frank” Dugger, a Rainbow Family member who witnesses said was with friends before five trucks came racing toward them unprovoked, around 10:30 p.m., Feb. 12, 2021.

According to news reports, one of the trucks shifted into reverse and sped backward toward Dugger, fatally shooting him at close range on before speeding off on Northeast 196th Terrace Road. Dugger, 41, of Johnson City, was rushed to a hospital, where he was pronounced dead.

Rainbow Family representatives said Sunday they intend to hold a vigil for Dugger on Tuesday in front of the Marion County Sheriff’s Office headquarters. Besides honoring his memory, they said they want the sheriff’s office to release more about its investigation into Dugger’s death.

Zach Moore, public information officer of Marion Sheriff’s Office, said Monday the department can’t comment as it is an open investigation. He said it may seem like the sheriff’s office is not doing anything, but they are processing subpoenas and following up on leads.

“We investigate every case that comes by, no matter where the people come from,” he said. “We want justice for all victims.”

The Rainbow Family representatives said they are also concerned about what they described as increased tension among local residents toward them. The group is also at odds with the U.S. Forest Service over whether a permit is necessary for it to meet in the forest.

It has all combined to reduce attendance this year, said those who did come to the gathering.

“It’s a bit more gloomy this year,” said a woman who would only identify herself as Pop-Tart, her Rainbow name based on her inability to cook. “A lot of people are suffering.”

“I almost didn’t go,” Schweikart said. “Yikes, you know, but I felt like this actually would be more important to go to show solidarity.”

The first Rainbow Gathering took place in Colorado in 1972 as a means to pray for peace, according to the original invitation found on an unofficial website.

Since then, the Rainbow Family has grown into an alternative lifestyle community consisting of thousands of people across the U.S. and other countries.

They adopt Rainbow names in the woods. They trek from national forest to national forest, setting up camp for up to four weeks at a time before they move on. Like the snowbirds who arrive in the South every year, they arrive in their winter location: Ocala.

Pop-Tart was among those worried about hostilities with residents from Silver Springs.

“There’s a lot of blind hatred and resentment,” she said. “Some of them will have never even encountered one of us and then will make a judgment call.”

Many Rainbows come and go along local businesses on County Road 314.

Lucille Smith, 84, said she remembers her experience with Rainbows in Montana.

“I would never go camping anywhere near where they are,” Smith said while at Duck’s Dam Diner, 10 minutes away from the gathering in the forest. “They would scare me.”

A server at the diner said some Rainbows have come in and taken some of its toilet paper.

At a nearby Circle K gas station, Heather Humphries, an assistant manager, said the Rainbows are polite and don’t cause any problems.

The forest service hasn’t gotten any reports of disturbances or complaints because of the gathering, but recommends people to stay away from the area because it lacks a permit, according to Jason Lawor, a public affairs specialist.

Permits are required for any gathering that exceeds 75 people, Lawor said.

However, while he said this is only the second year they have not had a permit, the Rainbows there this year said they are struggling with the notion of signing for one.

“There’s no one Rainbow that can sign the permit, because there’s no one that says, ‘I’m Mr. Rainbow. I’m the president of Rainbow,’” said Joshua Hanson, who runs the Jesus camp, a religious sector of the gathering. “There’s no one. That’s the beauty of this.”

According to Rainbow member Jeff Zielinski, signing a permit would mean relinquishing their constitutional right to assembly.

“It’s a community of like-minded individuals who are tired with society and government and regulations,” Szalinski said.

Suzanna Abbott, 78, said being with the Rainbows reminds her of her time in Oregon, where she lived in the woods for 18 years. She and her boyfriend, Corey Livengood, 39, said they enjoy the change of pace the gathering offered.

Joshua “Bobby” Tison, a first time Rainbow from Jacksonville, said he had considered attending since a roommate told him about it 16 years ago. Tison brought his girlfriend Ayron Moleen and her family with him. The couple played guitar and banjo and sang during a chili cookoff.

“The community is incredible,” Moleen said. “Everyone is so generous and just, like, great, man. It’s really cool.”

Sarah Breske is a reporter for WUFT News who can be reached by emailing news@wuft.org.
Previous Golden moment: Ocala’s Erin Jackson becomes 1st Black woman to win speedskating medal
Next The Point, Feb. 14, 2022: How a woman from Ocala made history in winning an Olympic gold medal