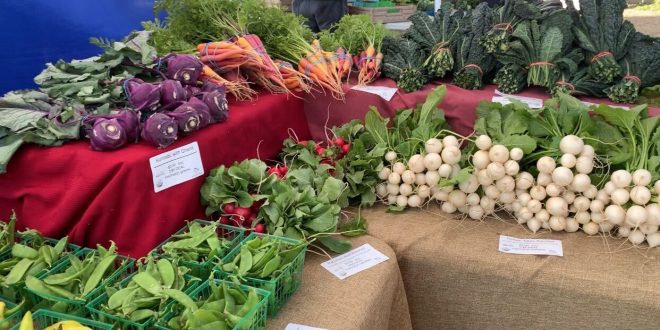 Harvested crops from Frog Song Organics at the Grove Street Farmers Market. They were sold after the hard freeze. (Mariana Ortiz/WUFT News)

Anne Opalewski and Scott Lunden cleaned off their damaged pea pods the morning of Jan. 31. The couple, who live on a 25-acre farm in Hawthorne, was among those affected by the recent low temperatures.

“The peas took a whack,” Lunden said. “But there is not much you can do but just hope the rest of the crop doesn’t die.”

A cold front froze many crops as temperatures dipped to 25 degrees in some areas.  Farmers like Opalewski and Lunden had their livelihoods threatened when they realized that some crops would not survive the low temperatures. In 2019, Florida recorded 9.7 million acres of farmland, generating $7.67 billion.

A hard freeze was expected at dawn on Jan. 30. Hard freezes can be more dangerous when wind is involved, said Tatiana Sanchez, the Alachua County commercial horticulture agent.

“The wind is going to create a lot of the symptoms that you see after a hard freeze,” Sanchez said.

Some of those symptoms can be browning, wilting and curling of the leaves and stems.

When a hard freeze occurs, the crops get an ice formation within the plant tissue, meaning that the temperature goes below 28 degrees. If the tissue freezes, it will kill the plant.

A cold wave will hit the north central Florida area the second week of February. Temperatures are not expected to drop below 40 degrees, making it safe for the crops and easy on the farmers.

Lunden, who is a retired firefighter, said he dreamed of owning a farm since he was young. He now has a garden with kale, peppers, green onions and a variety of herbs. The farm also has chickens, cows, a flock of sheep and a slaughterhouse just steps from his home.

Everything the couple grows on the farm is consumed and shared with their neighbors, Lunden said. The couple feared that many of their crops would not survive even though they took measures to protect their farm.

Lunden and Opalewski coated their citrus trees with a layer of ice by leaving their sprinklers on all night. Opalewski said the method seems to have worked for some of the crops.

“The bananas look sad, all brown, but they will get trimmed in the spring,” she said. “The celery, cabbage, strawberries, carrots and Brussels sprouts have no damage.”

Last week, the couple went to sleep in hopes that their efforts would be enough. However, other farmers did not sleep at all. Ramon Angeles, a Lake Butler resident and owner of Angeles Farm, woke up multiple times in the middle of the night to check his crops.

About 40% of his crops succumbed to the cold weather. He expects the number to rise as the soil becomes extremely wet once the ice melts.

“Microjets are smaller sprays of water that aim lower on the ground, use less water and deliver it more to the root system,” Ritenour said. “It is more efficient.”

Growers would spray water over the plants to create a layer of protection at 32 degrees. The ice then releases some heat, keeping the temperature steady and causing no harm.

“Even if you see a lot of ice on the tree or on the plant, it is usually protecting the plant itself from freezing or dying,” Ritenour said.

Plants can also be covered with sheets, blankets, cardboard, or a tarp to prevent them from freezing. Farmers can also prevent frost on plants by harvesting everything that can be saved and storing it inside.

Amy Van Scoik, co-founder of Frog Song Organics, spent the evening of Jan. 29 collecting all her crops before the freezing night.

The farm crew from Frog Song Organics stacked kale up to the ceiling in a cooler. An image shared on its Facebook page shows the kale harvest.

Scoik and her husband, John Bitter, grow around 80 different types of fruits, vegetables and herbs on their 60-plus acres. The couple used sprinklers to protect the citrus trees so they could survive without too much damage.

Jean Vincent, a geography professor at Santa Fe College, lives a mile away from Frog Song Organics. She said that the hard freeze affected some of her plants but those who were older and well taken care of survived.

“Once plants are established at least two to three years in the ground, they will usually recover from the freeze,” Vincent said.

Daniel Robleto, who manages a family farm called Nicoya Farm in southeast Gainesville, harvested most of his crops and covered the rest. He sold his crops at the Haile Plantation Market the following day.

After the market, Robleto covered his 4,200 square feet field with polyester row cover. Robleto said he had used the sprinklers before, but they are a lot more time-consuming and expensive.

“It wastes a lot of water, and it is too much to put in the fields. It can damage some crops,” Robleto said.

He suggests farmers invest in a tent or row covers.

“For peace of mind, I think it is a good investment,” Robleto said.

While temperatures are expected to drop again, farmers are glad their crops won’t have to endure another hard freeze.

“My strawberries are finally blooming,” Opalewski said. “Hopefully, this weekend isn’t as cold.”

Mariana is a reporter for WUFT News who can be reached by calling 352-392-6397 or emailing news@wuft.org.
Previous The Point, Feb. 9, 2022: A review of the Alachua County superintendent’s contract is ahead after school board’s evaluation
Next Florida youth to have heavy influence on 2022 governor and senate races, analysis suggests 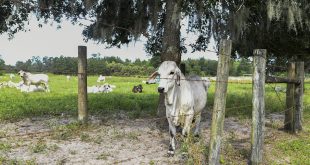